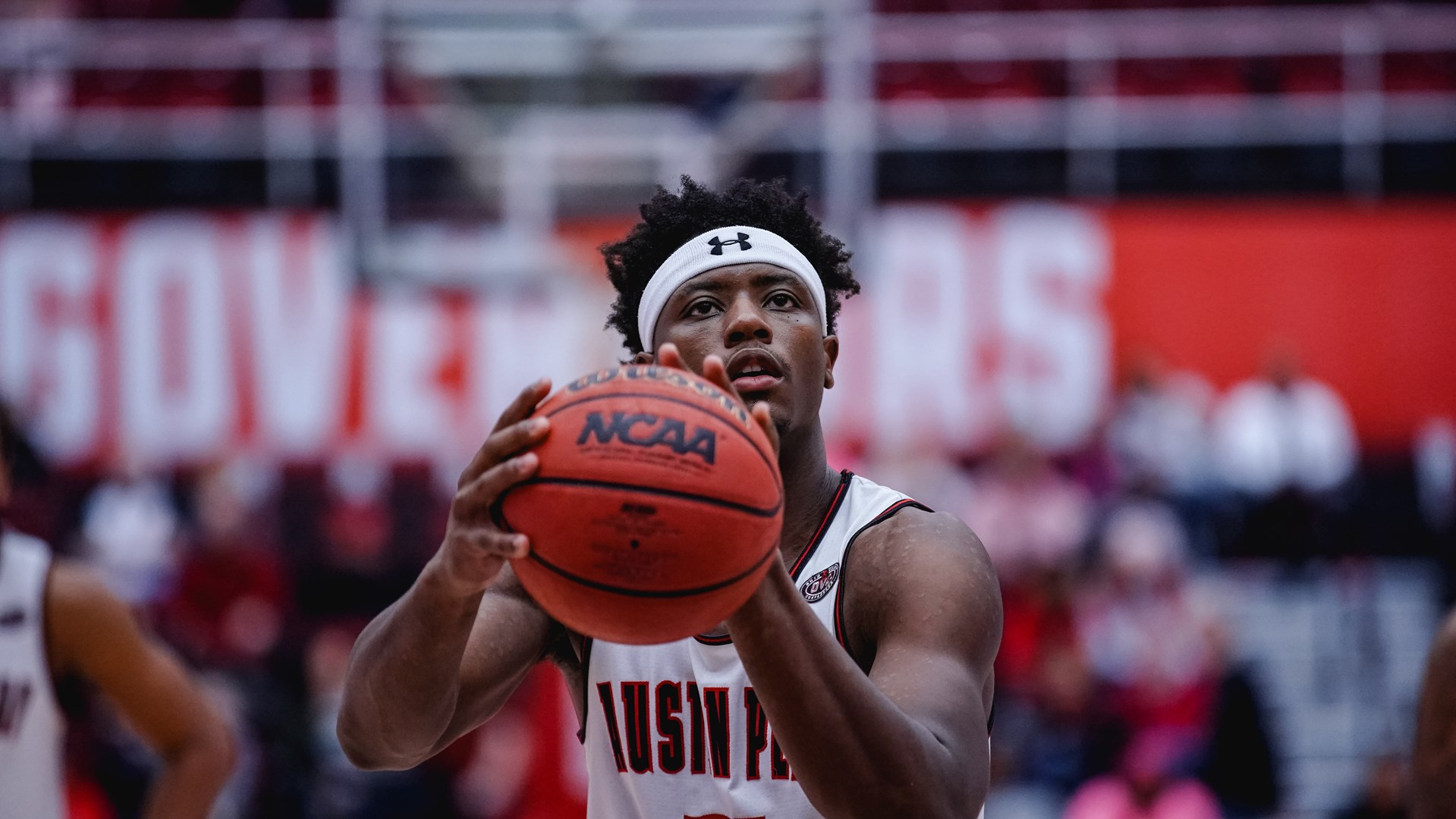 Terry Taylor has been tearing up the Ohio Valley Conference for three years at Austin Peay. He put the league on notice right away, earning the Freshman of the Year award and being named to the conference’s first-team.

Taylor has continued to grow, and he just finished a junior season that saw him average 21.8 points and 11 rebounds per game. Those numbers led to him being named the OVC’s Player of the Year for the 2019-20 season, and he was the only player to lead his conference in scoring and rebounding in all of Division I.

I had the pleasure of getting to catch up with Taylor to reflect on his past accomplishments, what he learned from the NBA Draft process, and what he hopes to achieve during his senior season.

1) How have you been keeping yourself in basketball shape during the COVID-19 pandemic?

Taylor: I’ve still been lifting, bike riding, and running, especially when the pandemic started. When things started to open up, I went back to working with a trainer that I know in Bowling Green. He and I have been working out to try and keep my body right and strong in case we get the chance to play ball again.

2) Have you heard anything about when you can return to campus and what that will look like?

Taylor: We get to back to school and start workouts after we go through quarantine and get tested for COVID. I haven’t heard anything about how the season may go, but I know we can start small group workouts towards the end of the month.

3) What was it like growing up in a state like Kentucky where everyone seems to live and breathe basketball?

Taylor: It was an amazing experience, especially playing in the state tournament and seeing thousands of people there to watch you play. Being in that atmosphere was surreal. I tell all the younger Bowling Green players that’s the goal to play there and get that experience. There are often college coaches there, and getting the chance to be seen by them can be life-changing. Being from Bowling Green, there’s so much talent here, but we get overlooked.

Most people think of Bowling Green in Ohio instead of Kentucky. I’m trying to help change the narrative that Bowling Green has talent and that more college coaches should recruit there.

4) You committed to Austin Peay before your senior year of high school. Why was making that decision so early important to you?

Taylor: They prioritized me and came to my last three tournaments during the summer circuit. They focused on me and they were constantly checking in on me and my family. I just woke up in the middle of the night and felt like it was the right decision. Committing before my senior year was right because I was close to home and I could play during my senior year without worrying about having to play well in front of college coaches. I could play my game knowing I already had my spot secured and didn’t have to worry about the constant texting and school visits.

5) You stuffed the stat sheet with rebounds as a guard, including 23 against Belmont earlier this season. Why is rebounding such an important part of your game?

Taylor: I wasn’t always the scoring type growing up. I could score, but not like I do now. I’ve always harped on rebounding and it’s been a gift to me, having a knack for knowing where the ball was going. When my body and my game started catching up, it made it so much easier for me track down rebounds. Plus, I’ve always had coaches that told me rebounding and defense would keep me on the court. I always kept that in my mind that if I do this I’m for sure going to play no matter where I go. Anybody can score, but not everyone wants to rebound and go down there and get their nose dirty. I used that and ran with it while my offensive game caught up.

6) You and freshman Jordyn Adams formed a one-two punch for the Governors last season. What was it like playing alongside him?

Taylor: It was a big relief having someone else who could score and take a little bit of pressure off me with the scoring load. Jordyn is so special when it comes to scoring the ball. He has a knack for getting to the rim and shooting, especially off the dribble. Overall, we had better playmakers this year. (Reginald) Gee, our point guard, played really well. Antwuan (Butler) was good. Eli (Abaev) rebounded so well, and if he had never gotten his concussion he would’ve been a double-digit rebounder too. Alec (Woodard) came off the bench and hit some shots for us. Evan (Hinson) and Sita (Conteh) were really good in spurts for us.

Coach put together a really good team, but Jordyn really came into his own and I was really proud of him. I told him earlier in the year when he was struggling a little bit that it would take him some time to get used to it. It took me some time, and that’s okay, but when you get it, I promise you that you’re going to hit your stride. He hit his stride after the Vanderbilt game and you all saw the rest of it.

7) You and Jordyn each scored 37 points in a game against Tennessee State in January. What was it like to have a night where you both were scoring like that?

Taylor: I didn’t even know that I was scoring that much until someone told me towards the end of the game. I really thought Jordyn was going to go for 50 that game. That boy was on fire! The heat check shots he was hitting were unreal. It felt like I was watching someone play 2k for a little bit. I was telling him to go for 40, even 50 if he could.

He and I feed off each other so well. If one of us gets going, we’ll keep going until the opponent starts to key in on us. It’s hard to stop one guy when you’ve got another guy who can go off the same way. Coach started to play Jordyn and me in ball screen action so teams had to choose whether they wanted to give up the pull-up jumper or drive to Jordyn or the dump-off or pick-and-pop to me. The TSU game you could see that Jordyn went crazy in the first half and built up confidence, and in the second half, I came into my own when they started keying in on him.

8) What did it mean to you when you found out you were the OVC Player of the Year?

Taylor: That’s all God. God put me in that position and every position I’ve been in, so I’ve got to give all the credit to him. It was a crazy feeling because I never expected myself to be player of the year coming into college. My only goal when I first came to college was to win freshman of the year and be a contributor to the team. I’m a kid from Bowling Green, KY, and not many people are expecting a kid from Bowling Green to be player of the year or take a conference by storm. It was a blessing for me and I can only thank God and my teammates for it.

9) What do you feel you still want to improve in your game?

Taylor: There’s so much I can improve on, so many things I can nitpick from games. I would say getting my shot off quicker or just being more vocal with my teammates. Also trying to get over the hump and win the OVC Championship. I really think that’s the only thing I have left to accomplish. My season and career averages could go down, and that would be okay with me as long as we come out on top. I could have the worst season possible, but to win our conference tournament would make me happier than anything.

10) What was it like going through the NBA Draft process?

Taylor: Hearing the feedback and knowing that teams know who I am is a good feeling. I’ve got to work hard on my free-throw percentage and three-point percentage. I have to prove to them that I can do those two things consistently and play on the perimeter. Because of the system I play in, I don’t think a lot of teams fully know if I can play on the perimeter and I want to be able to showcase that I can. If I continue to work at it I don’t think a team will regret taking a chance on me.

11) How are you and your teammates handling the high expectations that many have for Austin Peay for this upcoming season?

Taylor: It can be hard not to pay attention to it. A lot of the outlets tag you, people send it to you, or my teammates send it in our group chat or to me individually. Over the years I’ve tried not to pay attention to it because we still have to go out there and play and the other team has to go out there and play. Whatever the media or the outlets say doesn’t matter because other teams still have to lace their shoes up and fight me and my teammates for 40 minutes. The young guys will pay attention to it because they’re into it and they’ve got something to prove.

For me, I just take it game by game. That’s because I’ve been around Coach Figgs (Matt Figger) for three years and that’s all he talks about, one game at a time and that the game right now is more important than the game a week or two from now. That has stuck with me and I’ve really taken it to heart.