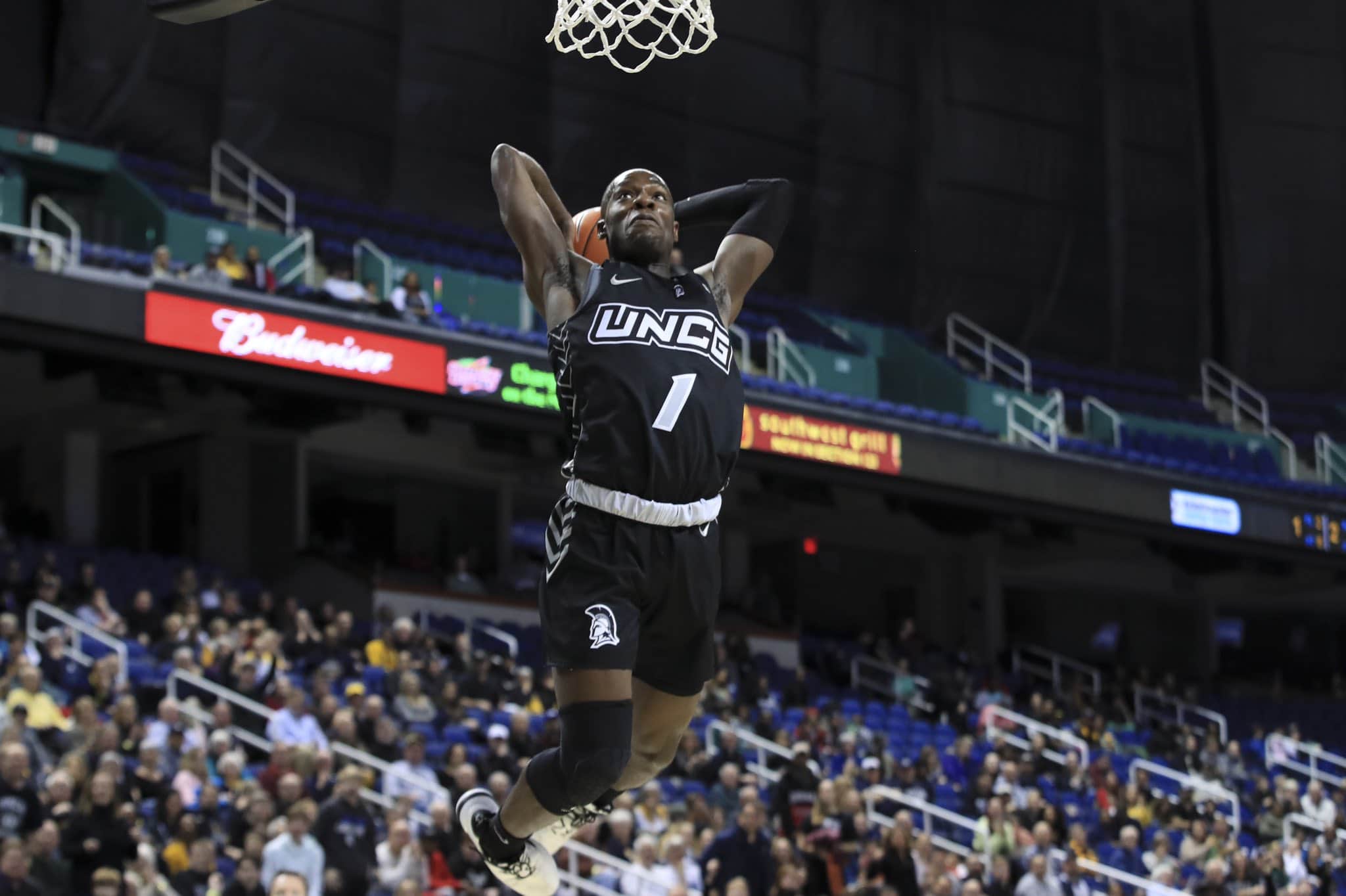 There is a lot of uncertainty surrounding the 2020-21 college basketball season. One thing that isn’t uncertain are the quality players that will be around for any type of season that is played. There is a ton of talent at the mid-major level once again this season. Many of these players already made a name for themselves and are poised for another great season. Others are expected to take bigger roles and flourish in the spotlight. No matter what their star power is, these players are on the mid-major radar heading into 2020-21.

Terry Taylor might be one of the best players you’ve never heard of (until now). Belmont and Murray State get all the shine in the Ohio Valley Conference, but Taylor is poised to lead Austin Peay to the top this season. Taylor is the reigning OVC Player of the Year and will be the favorite to defend his title. He can score at will and catch fire at any time while also getting his nose dirty and fighting for rebounds. Taylor is not only a mid-major All-American but a candidate to find his way on the national All-American team by season’s end.

Jordan Goodwin should enter the season as one of the favorites in a loaded race for the Atlantic 10 Player of the Year award. Goodwin could also end up on the national All-American team just like Taylor above. He is a solid defender who finds a way to force turnovers and create offense from his defense. He is also another guard that’s not afraid to bump down low and grab rebounds. Goodwin will be one of the big reasons why the Billikens are serious contenders in the A-10 and could potentially win a game or two in the NCAA Tournament.

Gonzaga gets all the attention in the WCC, but Pepperdine has a star in Colbey Ross. He is the do-it-all guy in Malibu, being able to score, pass, or rebound as needed for the team. He is a two-time first-teamer in the league and will easily find get his third appearance this season. Furthermore, Ross should be a contender for the WCC’s Player of the Year honor. He is particularly good at producing in pick-and-roll situations, whether that’s making the pass or getting the ball back to score. Ross will be the main reason why Pepperdine will find itself back near the top of the WCC this season.

Jordan Goodwin isn’t the only Atlantic 10 star guard that wears the number zero. Jacob Gilyard is the leader of the three-headed monster Richmond enters the season with. He is the reigning Defensive Player of the Year in the A-10 and was a finalist for the national Defensive Player of the Year award. Gilyard can wreak havoc by picking the pocket of any opponent and turning it into quick points. His ability to kickstart the Spider offense is crucial to their success. Keep an eye out for Gilyard and Richmond as they are yet another threat out of the Atlantic 10 this season.

Cameron Krutwig feels like he’s been around forever. That’s what happens when you come to fame as a freshman on a Final Four team. Krutwig is a Player of the Year candidate in the MVC once more, finishing in second place last season behind UNI’s AJ Green. He became the first player in Missouri Valley Conference history last season to finish in the top five in the league in scoring, rebounding, assists, and field goal percentage. Krutwig is the leader of a Ramblers team that has the capability to reach Cinderella status again this season. It should be a big senior season for the big man.

Fatts Russell decided to return for his senior season at Rhode Island after testing the draft waters. That’s good news for Ram fans as he has been the heart and soul of this program over the last few years. Russell is easily one of the hardest-working players in the country and is the kind of player that can win games on his own for URI. He can also lock you down defensively. Russell was originally expected to carry the load before waivers were granted to some key transfers. Still, he’s option number one for the Rams and will help them compete at a high level in the A-10.

Derrick Alston Jr. enters the year as one of the favorites for the Mountain West Player of the Year award. He flirted with the draft but decided one more year in Boise would be best. Alston finished last season as a top ten finalist for the Julius Erving Small Forward of the Year award. He can score at will when needed and has the versatility to play in both the frontcourt and the backcourt. Alston is the kind of playmaker the Broncos need to try and get themselves back to the NCAA Tournament and compete for an MWC title.

Isaiah Miller doesn’t have much left to prove. He was the Player of the Year in the SoCon last season and also took home his second-straight Defensive Player of the Year honor. There’s no reason to believe he can’t capture both of those awards again this season. Miller finished second in the nation in steals and can affect the game in so many ways. His playmaking ability at both ends of the court make him lethal at any given moment. Miller is the leader of a Spartans team that should make some noise in 2020-21.

Paul Atkinson shared the Ivy League Player of the Year a season ago but should find himself winning it outright this season. He is one of the most efficient offensive players in the nation, with a career field goal percentage around 66 percent, sixth-best in D-I history. Atkinson scored in double-figures in all games played last season and is the guy the Bulldogs can go to when they need a clutch bucket. He will help Yale climb back to the top of the Ivy League once more and make some power schools sweat.

Ahsan Asadullah came into his own after taking on a bigger role for the Bisons last season. He is your prototypical big man who works well in the paint and grabs rebounds with ease. Asadullah can score in droves at times, going off for 40 in the quarterfinals of the conference tournament earlier this season. He can also get his teammates involved when teams give him more attention, as evidenced by his assist numbers. Asadullah should be the preseason Player of the Year in the Atlantic Sun, and Defensive Player of the Year is not out of the question either. He will be a key reason why Lipscomb should ascend back to the top of the league and be a dangerous mid-major.

Loren Cristian Jackson captured the MAC Player of the Year award behind a stellar season leading the Zips to the top of the league. He is quick and shifty, and he overcomes his size to still shoot well from beyond the arc. Jackson is the catalyst of the Akron offense, weaving through defenders to find his shot or find one for his teammates. He will have to take on a bit more of a load to take Akron back to where it was last season, but he is more than capable of the task.

Grayson Murphy is exactly what you expect when you think of a point guard. The mid-major star facilitates the offense by getting teammates the shots they need to score. He plays hard-nosed defense and gets his hands in your pocket, turning you over in an instant. Murphy also fights for rebounds and can find his stroke when he needs to. He enters 2020-21 as the OVC’s reigning DPOY and should easily defend that honor. Murphy is another in a long line of good Belmont guards, and he’ll have the Bruins competing at the top of the league once again.

Markquis Nowell may have been snubbed of the Player of the Year award in the Sun Belt last season. However, that can just add fuel to his fire coming into this season. He was a big reason why Little Rock blasted far beyond their preseason expectations and took home the SBC regular-season title. Heading into his junior season, Nowell can really put his stamp on the league if he can find a way to increase his averages even more. Specifically, he improved defensively, and a more well-rounded game from him means Little Rock will be the favorites in the Sun Belt for 2020-21.

Matt Mitchell was one of many key supporting members for the miraculous run that San Diego State had last season. He will have to step up a bit more with Malachi Flynn turning pro, but he is more than capable of the responsibility. Mitchell has been consistent during his first three years with the Aztecs and he’s due for a breakout campaign. Don’t be surprised if he finds a way to increase his scoring average while keeping San Diego State in contention for a Mountain West title and NCAA berth.

There’s a lot to love about Loudon Love’s game. He is a game-changer defensively, altering shots or just swatting them altogether when you’re in the paint. His campaign garnered him the Horizon League’s Player of the Year honor last season. He has an excellent chance to defend that award and keep Wright State at the top of the Horizon once more. Love owns the paint with his rebounding ability, especially on offense. His 3.9 offensive rebounds per game helped create key second-chance opportunities for the Raiders.