A New Look for the American: Tulane Basketball 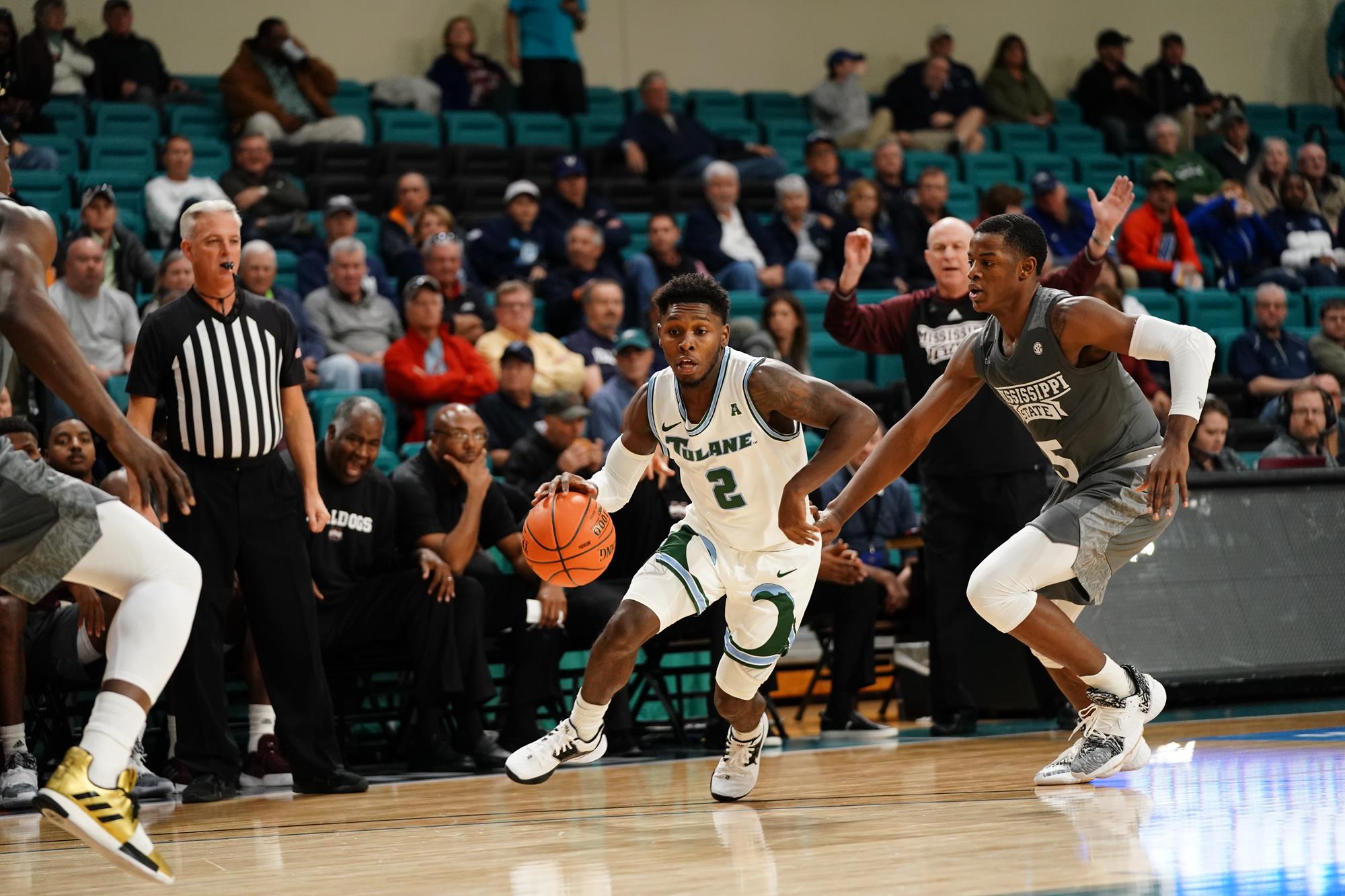 Tulane Basketball struggled last season, but there is hope for the Green Wave to improve in 2020-21.

After breaking down the University of Cincinnati Bearcat men’s basketball team, I had to go to a team that handed the Bearcats a surprising loss. The Tulane University Green Wave had a single match up last year against the Bearcats. The green wave put on a second half show to pull out a 76-71 victory. In a game where all the Cincinnati star players struggled to score, Tulane was able to capitalize from 3 and the free throw line. Kevin Zhang was a problem as he went perfect from 5 for 5 from beyond the arch. The green wave shot 53.3% from 3 point and 41.1% from the floor. It also helped that the team was able to make 27 trips to the free throw line and make 24 free throws. Beyond that, the Bearcats were not able to make shots from 3, making only 7 on 27 attempts. Now let’s check out how the Tulane men’s basketball team changes this season.

The Tulane University men’s basketball team is losing three players to graduation. The first is K.J Lawson, a 6-foot-7 forward. He lead the team in minutes last year while averaging 13.1 points and 5.5 rebounds. Another player graduating is a 6-foot-4 guard, Christion Thompson, who averaged 14.1 points and 6.3 rebounds. The last graduate is an off the bench 6-foot-1 guard, Nic Thomas. He averaged 7.9 points and 1.8 rebounds a game. While losing some mature talent, this team had a sophomore, who saw some great minutes in Jordan Walker. He contributed 8 points, 2.2 rebounds and 2 assists per game in 25.9 minutes.

In a surprising move, Kevin Zhang is seeking a professional career in the National Basketball Association. After two years in college, the 6-foot-10 forward averaged 5.1 points and 2.1 rebounds per game. The player has shown some flashes of greatness, but could see him potentially going oversees if he doesn’t make an NBA team. The other player is a 6-foot-4 junior guard who left early in the year in Ray Ona Embo. Embo, who averaged 5.5 points, 2.5 rebounds and 1.3 assists, is another surprise that has high hopes in becoming a professional basketball player.

There was only one player who transferred. This player was Charlie Russel Jr. He is another one of the team’s freshmen guards, who did not see a lot of playing time. The 6-foot-7 freshmen is going to University of Massachusetts Lowell. The biggest surprise and potential tragic ending was the dismissal of Teshaun Hightower. The 6-foot-5 junior guard, from Georgia, averaged the second most minutes on the team at 34.2 and was the leading scorer averaging 15.9 points. He added 4.6 rebounds and 2.4 assists to his 2019 statistics.

There are some conflicting stories surrounding the incident, but Mr. Hightower, the police believe, was the shooter when they ran into another individual and his girlfriend. Hightower is claiming innocence and that his brother is actually the one believed to fire the weapon and did so in self-defense. The person, who was shot, died at the hospital. This sad situation and Hightower’s arrest lead to his dismissal from the team. In any case, there was a lot of players that need to be replaced. Ron Hunter had a lot of rebuilding to do after his first year at Tulane, so let’s take a look at who he brought in.

The team that went 4-14 can only go up under Coach Hunter’s guidance. He is rebuilding a mostly new team. The graduate transfer was the best get for Tulane’s men basketball, Ryan Murphy. Murphy is a 6-foot-2 guard from Pittsburgh. Last year, he averaged 24.5 minutes, added 7.6 points, 1.9 rebounds and 1.2 assist per game. Murphy is a shooting guard that before Pittsburgh was a top-50 Junior College player. He will have all the ability to lead this team. He has great court vision, the ability to create his own shot and shots for others makes him a valuable asset. Beyond that, his ability to defend, create tempo, and energize a team will give this team new life.

Looking at another guard the team brought in is Gabe Watson, a 6-foot-2 junior from Southern Miss, he averaged 35.6 minutes added 13 points, 3.6 rebounds and 3.4 assists. He will be on the bench this upcoming season unless the NCAA decides to grant a waiver. He has a similar style of play to Murphy, but lacks some of the skills learned like varying the tempo. The Tulane men’s basketball team seems to be setting up to do well as a growing team.

The last guard transferring to the team is 6-foot-4 sophomore, Jaylen Forbes. Forbes was an off-the-bench guy at the University of Alabama, who averaged only 10.4 minutes, 2.7 points, 2.1 rebounds and 0.5 assists. His play is definitely more of a shooting guard skill set. Forbes looks to score first and pass second. He has the ability to find the open spots on the floor for shots and if they aren’t there he will pass out of it. Forbes has a good court presence, knowing where he is and where his teammates are allow him to get out of tight spots. He is also the guy who is looking for the player streaking down the floor. In most of his highlights, these plays seem to happen regularly.

The team was also able to pick up some help at forward to assist Nobal Days and Tylan Pope, who redshirted last year. The first is a 6-foot-8 sophomore forward from University of Nebraska, Kevin Cross. He averaged 18.3 minutes, contributing an average of 7.1 points, 3.9 rebounds and 1.2 assists. He is going to be an issue as he has a big frame and good footwork. While he isn’t the tallest player, I could see him drawing a lot of fouls when he drives. Another great piece for Tulane men’s basketball that will sit out a year unless he receives a waiver from the NCAA.

The last transfer player may end up being part of the interior game. Oton Jankovic is listed as a forward, but is as tall as the center Ibby Ali. Jankovic weighs a little less, but as a sophomore standing 6-foot-10 and weighing 212 pounds. He is a big land from Vanderbilt. Jankovic saw little playing time averaging only 6.2 minutes 0.8 points a game, 1.0 rebound and 0.1 assists per game. Another tall lanky player, he has good footwork and ball handling skills. I am curious to see if he can be more aggressive and think some time working with the team and learning from other big men could really make him an asset as he matures.

Both incoming freshmen are guards, the first is Sion James a 6-foot-4 freshmen. He is a 3 star recruit that sets up more like a shooting guard. He is a raw talent, but think he will likely get some minutes. His talent is there, but definitely needs to be developed and something that he needs from more mature players. It would also help for him to put on some muscle. Based on the tape I could find, I did not see any defensive plays. In the link, James is wearing the number 1. With this in mind, I think it is an area that all incoming freshmen can grow.

The other incoming freshmen is also a guard, Jadan Coleman. Coleman has a video that shows him more defensively, he needs a lot of work. He needs to work on his footwork. Coleman has great around the rim presence. He has a soft touch and has an idea of when to go opposite hand or up and under. In the video, Coleman is wearing number 20. He does seem to have some speed and likes to catch the other team off guard. He could easily become a point guard based on his speed and length. This would be the way I would lean for him, but he will likely be a shooting guard.

Tulane Basketball will be another remade team with all the new players coming in and old leaving. Coach Hunter will have a team that he can really mold and begin to shape into his program. While he has a long way to go, if Hunter can implement his system and players to fit it. He can easily be on his way to being a big competitor in the American Athletic Conference.

One thought on “A New Look for the American: Tulane Basketball”