A New Look at the American: Temple Basketball 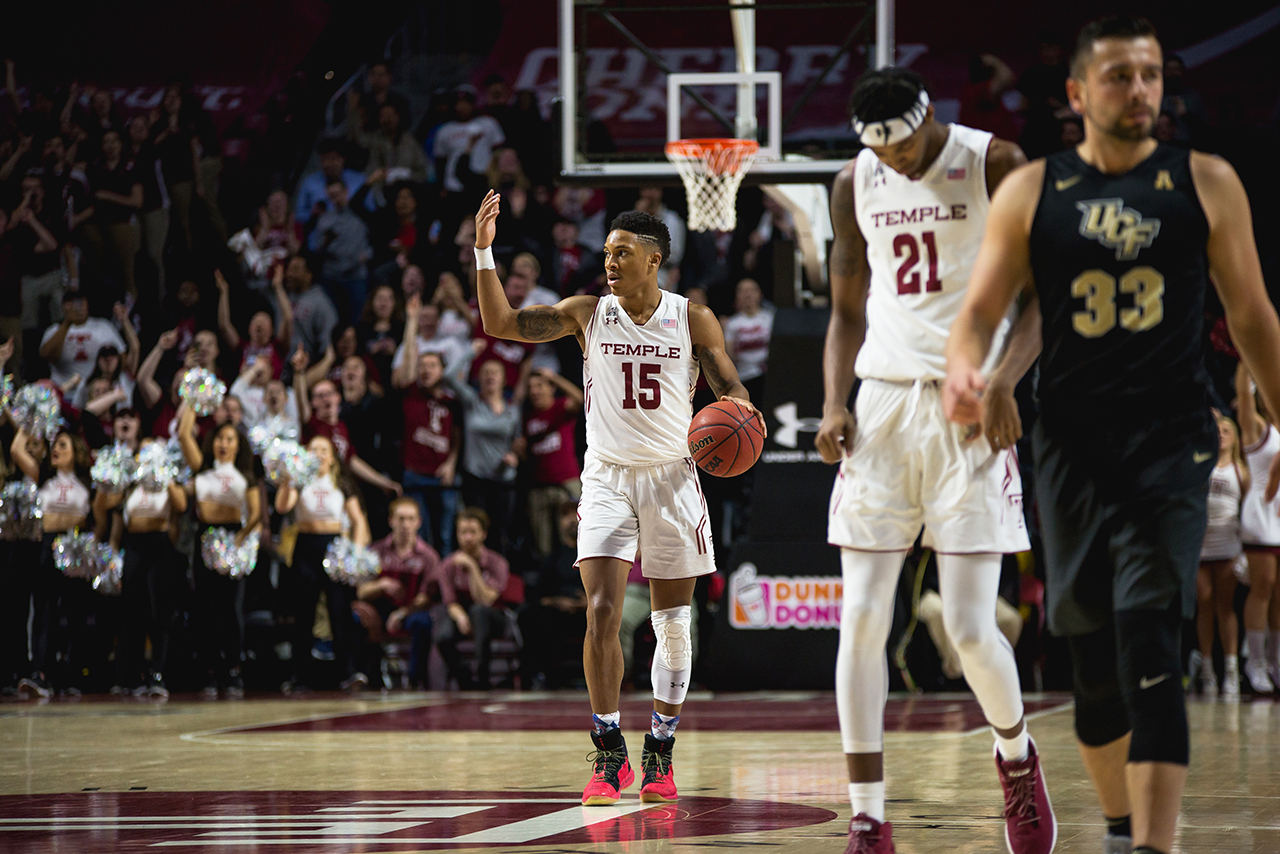 After breaking down Tulane last week, Tulane’s wins in the AAC were surprising. One of the teams they split with was Temple basketball.

In their first meeting, Tulane had consistent play allowing them to shoot 44.4% from the field and 36.0% from 3. The Temple basketball team struggled shooting 31.5% from the floor and 20.8% from 3. In the second meeting, the game looked as though it would have the same outcome, however, Quinton Rose was aggressive. He struggled from 3, but shot 6-14 from the field and then made 11 of 14 free throws. Rose was the leading scorer with 23 points. Monty Scott was second in scoring shooting 5 for 13 from the field, 2 of 8 from three, and 4 of 4 from the free-throw line. Scott ended the game with 16 points. Tulane led almost the entirety of the game until the last 90 seconds were Temple tied and was able to hold Tulane to a single layup and made it to the free-throw line 3 times to make 6 free throws and win the game. Let’s see how big a change is coming for the Temple University owl’s men’s basketball team.

Quinton Rose, the 6-foot-8 guard, led Temple basketball in minutes, points, and assists averaging 33.4 minutes, 16.4 points and 3.5 assists per game. He was third in rebounds averaging 5.0 a game. Rose will be a tough one to replace with his size and ability. The next graduate averaged the third-most minutes, points, and assists. Alani Moore, the 5-foot-10 guard averaged 32 minutes, 8.4 points, 2.8 rebounds and 2.6 assists per game. While one of the smaller guards around the league, Moore was very talented in creating space and shots. The last senior is Damion Moore. He was an off the bench 6-foot-11 center, that contributed as needed.

The most surprising transfer was freshman, Josh Pierre-Louis. After coming off the bench, this year he would likely have been starting. The 6-foot-3 point guard was a menace and fit the system. He showed flashes of being an excellent player and so the transfer to a different conference comes as a surprise. He would have been paired up with the other guard coming off the bench in Monty Scott. Scott is a 6-foot-5 shooting guard. He was a major contributor. Scott averaged 20 minutes a game, 7.2 points, 2.3 rebounds and 1.1 assists per game. Again, he should be a star in Portland and is a surprise transfer. Likely, the least surprising transfer is Justyn Hamilton. The 6-foot-10 forward was a junior that came off the bench, behind J.P Moorman, Jake Forrester, and De’Vondre Perry. Hamilton transferred to Kent State and will likely get the playing time and exposure that he is looking for.

In another move, Nate Pierre-Louis has hired an agent and is going to go play professionally. The 6-foot-4 junior combo guard averaged 32.8 minutes, 10.9 points, 8.5 rebounds and 3.1 assists per game. With the unique situation the world is in, the move is a surprising one, but it also helps explain why his brother is moving on from Temple. Wishing the best for Mr. Pierre-Louis in his future endeavors, the temple team will definitely miss him.

Sage Tolbert is a 6-foot-8 junior forward from Southeast Missouri State. At Southeast Missouri State, he averaged 27.3 minutes, 9.6 points, 7.0 rebounds, and 1.0 assist. He could easily contribute in his first eligible year, but it will all depend on how he develops with the team. Unless a waiver is granted, Tolbert will sit out with Temple basketball his first year.

The other player transferring in is the 6-foot-5 sophomore guard, Khalif Battle, from Butler University. He added some good minutes for Butler but was another off the bench player that will likely get thrust into some great playing time at Temple. If he can get granted a waiver, he would likely find his way onto the floor.

The first player has the best name in Jahlil White, the 6-foot-6 3-star recruit. Watching his tape, he has the ability to find the basket. He is quick, can score from anywhere. White’s weaknesses are definitely defense, court awareness, and footwork. While his footwork is solid, it could use some improvement. White is also a score-first player, in most of the videos, he gets crashed down on by three or four players, leaving a majority of players open around him to score, but he normally takes the shot. With the understanding that the scoreboard isn’t visible, I would be curious to see if this is a change that can be made in situations where the team could use a three instead of two points. With his size, White is not tight on his defense. Often giving the player space, he does have size to his advantage, but this is an area that needs to be focused on.

Quincy Ademokoya is a 6-foot-6 3 star recruit for Temple basketball. He seems to have a leg up on White as he seems to have a higher basketball IQ. Ademokoya is willing to pass out to the open players as teams crash in on him. There was not a lot on the defensive end, so I am unsure of his defensive ability. He is another play that can score from anywhere and power through to make shots.

Jeremiah Williams is a 6-foot-5 3 star recruit. This is probably my favorite incoming freshman. His style of play is what should find him minutes this year. While being the smallest of the incoming freshman, Williams has good footwork, solid defense, and a nice shooting touch. He is a little risky on defense, but he puts himself in the right places to stop guards, get rebounds, and put backs.

Nick Jourdain is a 6-foot-8 unranked recruit. Finding only one video on the player, he is not aggressive in going after the ball, especially on passes. He waits for the ball to come to him. Jourdain’s defense has potential as he is used to playing in a zone defense. He looks to disrupt the passing lane and comes up quickly on the players receiving the ball. Jourdain does not seem to position himself well for offensive rebounds, but again is something that can be taught. While he is a good facilitator, he does not seem to be aggressive in driving to the hoop. It will be interesting to see him grow as a player.

Overall, it’s clear to see that Temple basketball has a lot of moving pieces, which will be interesting to watch come next season.

Featured Image from the Temple News