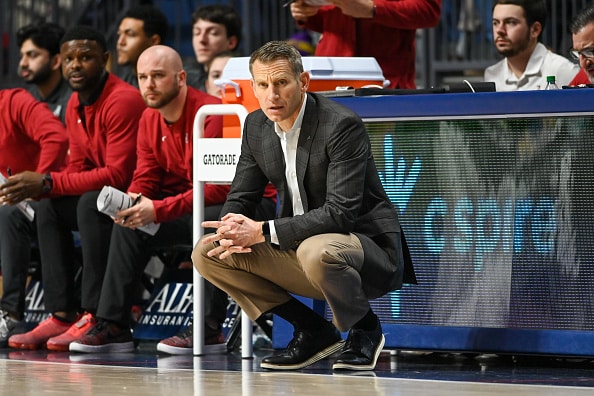 George Bagwell gives his SEC basketball power rankings for week 4 of the season.

Matchup of the week: Kentucky vs. Michigan

Sneaky good matchup of the week: Ole Miss vs. Memphis

All game times are in EST.

Alabama won what is perhaps the best game of the young season so far on Sunday night, beating #1 UNC 103-101 in 4OT. Mark Sears led the way for the Crimson Tide with 24 points in *55 minutes*. This win plus the victory over Michigan State vaults Alabama to the top of the rankings this week, even with their loss to UConn.

While Brandon Miller cooled off a bit against UNC, he averaged 21 over the two-game stretch against Michigan State and UConn, two very good teams. He’s shown to be one of the best freshmen in the country, leading Alabama in PPG with 19.6, and will be a fun watch for the rest of the season. One particular feature of this roster that could help come March is the depth. Currently, 9 Crimson Tide players are averaging 6+ PPG.

Looking ahead, the Tide play South Dakota State, a bit of a rest from the Phil Knight Invitational.

The loss to Colorado is looking more and more like an aberration for Rick Barnes’s squad as the season shifts into second gear. Since then, the Volunteers are 4-0 with wins over three Power 6 opponents, including #3 Kansas. What’s really impressive is that those three wins were without leading scorer Jordan-Josiah James. The defense has been smothering, holding Butler to 45 points and Kansas to just 50. If the Vols keep playing like this, they can stay near the top of the conference standings.

The Volunteers have an easy week this week, playing McNeese and Alcorn State, so they’re not likely to move much in these rankings either way, as they prepare for upcoming matchups against Maryland and Arizona.

Arkansas lost a nailbiter to Creighton in Maui, in a game that went back and forth constantly in the last few minutes. They bounced back nicely, defeating a good San Diego State team. After a slow start, Anthony Black has picked up recently, now averaging 14.2 PPG after scoring 26 against both Louisville and Creighton.

Looking ahead, Arkansas plays Troy and San Jose State, not exactly cupcakes, but it’s reasonable to suggest 20+ point wins in both contests. If there’s a reason for even more optimism around this program, it’s because they’ve gone 5-1 without Nick Smith. Once they get the star freshman on the court, they could vault to the top of the conference and become legitimate title contenders.

“Who has Missouri played?,” was a question I got asked after last week’s edition of SEC Power Rankings. The better question is “who can stop Missouri?” They’re shooting a ridiculous 52.6% from the field, a mark 5.3% better than the second-best team in the conference. In fact, the gap in FG% between Missouri and Arkansas, the second-best shooting team in the SEC, is larger than the gap between the 7th-rated team and the 14th-rated team in the conference. (Florida and Tennessee, in case anyone was wondering.)

D’Moi Hodge picked up SEC POTW honors for Dennis Gates’s team, and he’s played exceptionally, averaging 16.6 PPG. The Tigers have 5 players in double figures, and are averaging 23.1 APG and 93.3 PPG. This is a quality team, and Wichita State shouldn’t present too much trouble this week.

Mississippi State may very well have the best defense in the conference, picking up two three-point wins against Marquette and Utah last week. They’re giving up a league-best 48.5 PPG, which is the main reason why they’re still in the ranks of the unbeatens. Not only are they the best in SEC basketball, they’re almost the best in the country. Only Houston ranks above Chris Jans’s team in opponent PPG, and the Cougars and Bulldogs are the only teams giving up below 50 PPG.

Auburn played one of the ugliest games of the season against Northwestern but remained undefeated against all odds. While they looked better against Saint Louis, this is a flawed team. Shooting just 26.6% from behind the arc, the Tigers are still attempting 22 of them per game. If you’re going to shoot them, make them. Speaking of missing, Dylan Cardwell finally missed a shot. It’s week four. He’s shooting 77.8% from the field and averaging 2.9 BPG. Please give him more than 17 MPG, Bruce. I beg.

On the bright side, they haven’t lost yet, and they probably won’t this week, as they host Colgate. The defense is great, giving up only 56.9 PPG, good for 15th in the country. But they’re only scoring 70 PPG, good for 173rd nationally. The Tigers need to find an offensive rhythm.

As expected, the Wildcats took care of business against North Florida, winning comfortably by 40 points. That’s not enough to move them up the rankings, however, after two early season losses to Michigan State and a Gonzaga team that has been blown out by Texas and Purdue already. The team still looks solid, it’s just hard to put them over the top 6 teams on this list when their best win is against Duquesne.

However, John Calipari’s team has a chance to move the needle this week, as they host Michigan. Oscar Tshiebwe vs. Hunter Dickinson has the potential to be the best frontcourt matchup of the year.

Ole Miss finally lost, in a close game to Oklahoma. However, it could be argued that they exceeded expectations at the ESPN Events Invitational. Beating Stanford and a Siena team that has since beaten Seton Hall is certainly a positive. Amaree Abram has played quite well recently, second on the team in PPG and APG, behind just Matt Murrel in both categories. For a coach that was on the hot seat at the beginning of the season, it’s difficult to say Kermit Davis hasn’t improved markedly since last year.

Looking ahead, a trip to Memphis will be a nice barometer for the rest of non-conference play for the Rebels.

LSU finally took their first loss of the season to a good-not-great Kansas State team led by former Florida Gator Keyontae Johnson and Markquis Nowell at point, then played a not-good-or-great Wofford squad close, winning by just three. (Though Wofford freshman Jackson Paveletzke looks legit, averaging 16.9 PPG this year, including 19 against the Tigers. He could be one of the best mid-major freshmen in the country.)

But for Matt McMahon’s squad, it’s not the best of starts to the season, and part of that is depth. Averaging 73.3 PPG is fine, but almost 50% of that (34.7 PPG) comes from just KJ Williams and Adam Miller. The Bayou Bengals need more offensive firepower from the rest of the roster once they get to conference play. UT-Arlington this week shouldn’t be too difficult, however.

Texas A&M only played once last week but made the most of it, beating a Big East opponent on the road by 16. It’ll take more than that to keep moving up the rankings, but statistically, this is not a bad team. Rather, it’s a good team with two very bad games back-to-back. They’re 6th in the conference in FG% and sit 8th in 3PT%. They’re sending opponents to the line, though, averaging almost 23 fouls per game. They’ll need that number to go down if they want to move up these rankings. This week, they’re taking on SMU and Boise State, both games they should win.

Losing to Xavier is excusable, but the Gators were completely non-competitive against West Virginia, losing by 29. Colin Castleton can’t do everything, and him having an off-game shouldn’t automatically give Florida a mark in the L column. Will Richard has been good, as has the Bonnies’ transfer Kyle Lofton, but the rest of the roster needs to step up. Myreon Jones is shooting 15% from the field. That needs to change if Florida wants to be competitive against good teams. Yes, it’s the first year of Todd Golden, but as much as Gator fans don’t want to hear this, the inconsistency in this squad resembles a vintage Mike White team during his tenure in Gainesville.

Coming up, the Gators play Florida A&M and Stetson. They’ll need to look out for Stetson, as the Hatters of Deland have already beaten Florida State.

It’s the second straight week of Vanderbilt not feeling bad about where their basketball program is at this point in the season. Sure, a win over Saint Mary’s would have been nice, but the Gaels beat North Texas by 30 and Hofstra by 28. They’re certainly a quality team, and Jerry Stackhouse shouldn’t feel bad about his team’s effort, especially after they bounced back with a win over Fresno State.

Continuing the trend of scheduling quality opponents in the non-conference slate, the Commodores travel to VCU on Wednesday in what could be a good chance to move up these rankings a couple of spots before hosting Wofford on Saturday.

Georgia losing to UAB is technically an upset in the sense that Georgia is in a Power 6 conference and UAB is still in C-USA, but UAB is a better team than the Bulldogs this year, and a neutral-site loss isn’t the worst thing in the world. However, it’s not like Georgia looked great against Saint Joseph’s and ETSU, either. Sure, they won, but Saint Joseph’s is the worst team in the A-10 and this year’s ETSU’s team is not the same team that lived atop the SoCon in recent years.

The road doesn’t get any harder for Mike White’s Bulldogs, either, as they host Hampton and Florida A&M this week. Sure, Kario Oquendo looks great, but until Georgia plays (and beats) real competition, it’s hard for them to move up.

It hurts me to say this, but this might be the worst team in the conference. That’s to be expected, however, when the top 6 scorers from a non-tournament team all leave. The Gamecocks trailed USC Upstate at half last week, and it’s worth wondering what the final score would’ve been had GG Jackson not continued his dominance with a 22-point, 6-rebound performance.