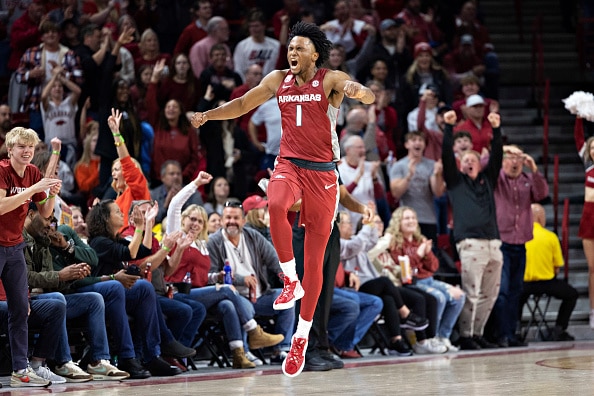 George Bagwell gives his SEC basketball power rankings for week 3 of the season.

Matchup of the week: Alabama vs Michigan State

Sneaky good matchup of the week: Auburn vs Saint Louis

Before you read this, keep in mind this is solely judging the first two weeks. This doesn’t take into account any preseason rankings, only each team’s performance so far this season. This means the rankings are likely to fluctuate early and begin to “normalize” in the coming weeks.

Arkansas is taking care of business early, starting 3-0 and winning every game by +15 points. Transfers Ricky Council IV and Trevon Brazile are leading the way with 18.7 PPG and 14 PPG, respectively. Brazile is also leading the team in rebounds, grabbing 10 per game, and maybe scoring the dunk of the year so far against South Dakota State.

Notably, freshman Nick Smith has not taken the court yet for Eric Musselman’s team due to injury. This week, they take on Louisville in the first round of the Maui Invitational before facing either Creighton or Texas Tech. Either opponent will be the first real test for Arkansas.

Alabama played well against South Alabama, in a game that wasn’t as close as the final score suggests. The Crimson Tide managed 63 rebounds in that contest, then outrebounded Jacksonville State by a +24 margin.

While the Crimson Tide haven’t played many quality opponents, they’ll get that chance in the Phil Knight Invitational against Michigan State. A loss isn’t the end of the world, but a win could vault Alabama up the polls. If they do manage a win, it’ll likely be because of star freshman Brandon Miller, who is averaging 20.3 PPG and 9.3 RPG.

Mississippi State continues to roll along in non-conference play, picking up a quality win over Akron, and beating all their opponents by 19+ points. Tolu Smith picked up a SEC POTW award for the first week of the season, and he’s averaging 17.8 PPG and 8.5 RPG. Besides Smith, guard Shakeel Moore is playing well defensively, averaging 3.2 SPG.

Looking ahead, the Bulldogs are playing in the Fort Myers Tip-Off, and they’ve got a solid shot to win the 4-team tournament.

Missouri’s offense is rolling, averaging 91.8 PPG, good for 10th in the nation. One could wish for more defense, as the Tigers are also giving up 74.2 PPG, but it won’t be a problem until the offense cools down. Isiaih Mosley may have finally broken out, scoring 18 against Mississippi Valley State after 3 slow games.

D’Moi Hodge is averaging 17 PPG after following Coach Dennis Gates from Cleveland State on 51.7% from the field. Elsewhere, Kobe Brown continues to lead the team in rebounds with 6.2 per game. Missouri’s undefeated start should continue this week, as they host Coastal Carolina and Houston Christian.

Auburn looked improved from a shaky first week, beating Winthrop and Texas Southern handily, even after a slow start against Texas Southern. They’re still sitting last in the conference with a 25% clip from behind the arc, and just 41.3% from the field overall. That’s not great, but the defense has been stellar and they haven’t lost, which is more than half the conference can say. Dylan Cardwell has been efficient, averaging 5.3 PPG on *100*% shooting from the field, and 4.2 BPG, which leads the team. Wendell Green and Johni Broome are the only Tigers averaging double-figures, but neither is shooting particularly well, with Green at 43.9% and Broome at 41.2%.

Looking ahead, Auburn plays Bradley and either Liberty or Northwestern in the Cancun Challenge. Bradley could be a tough matchup for the Tigers, who haven’t been particularly challenged yet so far this season. Make no mistake, however, the Tigers should be favored to win the tournament. After Cancun, the Tigers take on Saint Louis at home in what should be the biggest test of the year for Auburn.

Tennessee took care of a good FGCU team, winning by 31 against Pat Chambers’s team, one that had already beaten USC. They’ll play Butler on Wednesday, and the team that got beat by FGCU or BYU on Thursday.

Josiah-Jordan James has been playing well, leading the team in points and rebounds, averaging 13.7 and 6, respectively. This week should tell if the loss to Colorado was legitimate or just a bad day for Rick Barnes’s squad.

Kentucky drops to 7 this week after 2 losses. Two losses to quality opponents, but losses nonetheless. The Wildcats trailed Gonzaga by 16 at the half and never got back in the game. They played better against Michigan State, but it was still a loss to an unranked team.

This week, the Wildcats rest, playing North Florida at home. That likely won’t be enough to move them back up these rankings. On the bright side, Oscar Tshiebwe is back! All the way back, as he’s averaging 16 PPG and 13.3 RPG. Freshman Cason Wallace also continues to play well.

LSU took care of business last week and early Monday, beating New Orleans and Illinois State, but that was expected. Adam Miller continues to shine, as do Justice Hill and KJ Williams. But Matt McMahon needs the rest of his roster to step up if they’re going to be a force in the SEC again this year.

This week, they play Akron in the Cayman Islands Classic, in what could be a good game. They should win, though, as long as Adam Miller and the Murray State crew keep up the stellar work.

Ole Miss hasn’t looked good this season, but they keep winning, and that’s all that matters. Matt Murrell is the heart and soul of the team, averaging 36 MPG and 17.8 PPG along with 5 APG. A 12-point win against Chattanooga is probably their best win of the season, but it was unfortunately followed by a disappointing showing against UT Martin, a four-point win.

This week, the schedule gets harder for Ole Miss, as they take on Stanford and either Florida State or Siena in the ESPN Events Invitational. This should be a good measuring stick for Kermit Davis’s squad.

Florida lost in demoralizing fashion to a Florida Atlantic team that had already been beaten by Ole Miss, but bounced back on the road against a Florida State team that’s been underperforming so far this year. Colin Castleton is playing like a Wooden Award contender, averaging 25.2 PPG, best in the conference. But the Gators are going to need other players to step up too, especially Myreon Jones, if they’re wanting to jump up these rankings. It’s Todd Golden’s first year, so of course there will be wrinkles, but this is still a team that was predicted to make the tournament in the pre-season.

This week, they take on Xavier in the Phil Knight Invitational, then either Duke or Oregon State. If they can beat Xavier, a game against Duke could be a good opportunity to see how Florida plays against a top opponent.

What a week. Texas A&M entered the week ranked in the AP Poll, then promptly lost to Murray State and Colorado before beating a struggling Loyola-Chicago team. While Murray State is generally a good team, their roster was depleted from the loss of Coach McMahon to LSU, and Steve Prohm’s second stint in Murray is only in the first year. The loss against Colorado is more head-scratching, as the Buffaloes have already lost to Grambling and UMass.

The Aggies are giving up 70.8 PPG, good for 12th in the conference, and they’re also committing 22.6 fouls per game, which puts them at 342cnd in that category. If the Aggies are going to get back on track, they need to play cleaner and more efficiently on defense. That starts with a road matchup at Depaul this week. Wade Taylor IV is the only player averaging over 9 PPG, a stat that needs to change before conference play.

Vanderbilt responded well to an 0-2 start, first beating Temple on the road in overtime, then blowing out Morehead State at home. Vanderbilt is playing fine ball as of late, and Jerry Stackhouse should feel good about his team going into their matchup against Saint Mary’s.

Jordan Wright and Myles Stute are leading the ‘Dores, the only players in double figures. 11 players are averaging 10+ minutes, a good sign of the program’s depth. Besides Saint Mary’s, Vanderbilt also will play either Fresno State or Washington.

Georgia picked up two wins last week, but played much too close for comfort, beating Miami (OH) and Bucknell by just a combined 11 points. Terry Roberts led the Bulldogs in points in both contests, bumping his average up to 15.8 PPG. The Bulldogs sit in 12th place in the conference in both FG% and 3PT%, and commit over 17 turnovers per game, last in the conference. Unless the offense gets clicking, Georgia’s sluggish start to the season may continue.

Looking ahead, The Bulldogs play Saint Joseph’s and ETSU. Finishing anything other than 2-0 this week will be a disappointment, but ETSU could present a challenge for Mike White’s squad.

South Carolina occupies the last spot in the rankings this week after an 0-3 week at the Charleston Classic. A blowout loss to Colorado State followed by losses to Davidson and Furman are not what Lamont Paris had in mind after beating Clemson. While all three teams either made the tournament or were seconds away from it (Furman), 0-3 in a week is never a good sign.

GG Jackson has excelled, averaging 16.2 points and 8 rebounds per game. He’s looked every part of the 5-star recruit he was touted to be, and then some. Even though the Gamecocks have scored 60 or less points in 4 straight games, Jackson has managed double-digit scoring in every game. Chico Carter has also been solid, averaging 13.8 PPG to start the season.

However, the rest of the offense has been unreliable most of the time and is prone to elongated scoring droughts. Defensively, Carolina has given up 73.6 PPG, good for 278th in the nation. It’s only Lamont Paris’s first year, and it’s clear there will be some growing pains for the ‘Cocks this season.

Coming up, the Gamecocks just host USC Upstate this week, a good chance to get back in the win column, but not a great opportunity to move up these rankings.