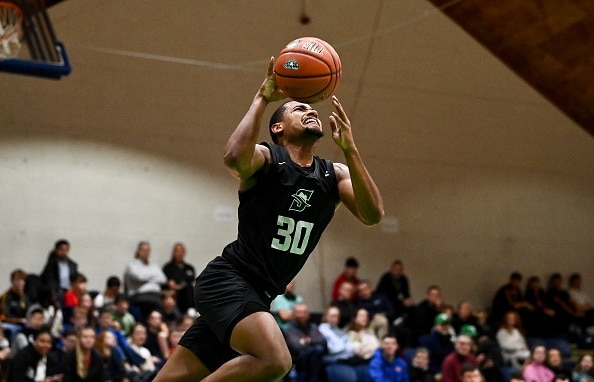 These power conference teams are on college basketball upset watch for week four of the 2022-23 season.

The number of upsets last week fell in number, but don’t blame the teams. Blame scheduling! The reality is that Feast Week was upon us, where early-season tournaments reign supreme and provide the average fan with mega-matchups. That doesn’t mean upsets didn’t occur though. Eight mid-major squads still shocked their power conference brethren in thrilling (or blowout) fashion.

Why not pick on the Huskies again? Truthfully, Fresno State wasn’t that far off from making our pick last week a reality. To be fair, Washington picked up their first good win by taking down Saint Mary’s the next night. Defense continues to be the name of the game in Seattle, forcing opponents to take tough shots and waste possessions. To that end, finding points hasn’t been easy for Washington either. That kind of pace naturally leaves the Huskies open to potential upsets.

Speaking of Seattle, the Redhawks will look to make their claim as the best team in the city in this one. Seattle is now one of just a handful of teams that are undefeated on the season, coming into this game at 5-0. The Redhawks are one of the best three-point shooting teams in the nation. However, they are efficient in general on offense and get a decent number of second chances. Seattle will have to step up their defense a bit, but this feels like a game they can win.

Let’s give Tony Stubblefield some credit here first. He had DePaul playing competitive basketball for the first time in a long time last season. The Blue Demons started out 3-0 this season before dropping three straight to tougher competition. DePaul’s defense isn’t terrible, but they give up far too many offensive rebounds to their opponents. Furthermore, they struggle to take and make quality shots. This is a group that will play tough but is still learning how to play consistently.

Enter the Samford Bulldogs out of the Southern Conference. Samford shot up the SoCon standings last year thanks in large part to the emergence of Ques Glover. The Bulldogs aren’t sneaking up on anyone this season, but still have a team that will push for a title in one of the nation’s most underrated leagues. Samford is rated in the top 75 both offensively and defensively on KenPom, and while they are shaking off a tough loss to non-DI UT Southern, they still have what it takes to pull off the upset.

South Carolina picked up a solid win against rival Clemson before going 0-3 in the Charleston Classic. The Gamecocks will be a roller coaster throughout the season as the program adjusts to Lamont Paris and the reshaped roster. The offensive end continues to be the bigger struggle, though there isn’t much to write home about defensively either. South Carolina goes on college basketball upset watch simply because they are too inconsistent to trust early in the season.

George Washington will play host to the Gamecocks and will need to continue their decent offensive numbers to defend home court. A lot of what the Colonials do goes through the outstanding play of James Bishop. The senior is averaging 21.3 points per game on the young season and has helped GW start 4-2. The Colonials have a good combination of taking excellent shots and playing stout defense thus far, which will carry them well not just in this game, but in the Atlantic 10 as well.

We mentioned roller coasters with South Carolina, but that’s even more fitting for Texas A&M thus far. The Aggies entered the AP Top 25 after the first week only to lose two straight before ripping off two more wins. Texas A&M has a team that will be pushing for an NCAA bid all season, but they need to improve a sloppy and unreliable defense to help with that cause. As it stands, A&M struggles to defend the deep ball and fouls opponents way too much, though they can force their fair share of turnovers.

Boise State is once again looking like one of the top contenders in the Mountain West. The Broncos already have two power conference victories over Washington State and Colorado and will not be intimidated here either. Leon Rice’s crew gets it done on defense, forcing tough shots and keeping opponents from getting second chances. Boise State does struggle offensively at times but does take care of the ball, which will be a big key against Texas A&M’s aggressive style. This game could go a long way for any at-large hopes the Broncos have.

Florida has already been a victim once to the college basketball upset, falling to a solid Florida Atlantic squad two weeks ago. The Gators really aren’t a terrible team and figure to ride the bubble throughout the season. Florida’s biggest weak spot is how easily opponents make deep balls against them. They also don’t force a ton of turnovers, so opponents will get looks and opportunities to make shots. The biggest thing for the Gators is being able to push the tempo to their liking.

Stetson opened the season with a bang, taking down Florida State on opening night. Things haven’t been as good late, with the Hatters having dropped two in a row at the time of publishing. Stetson gets it done on offense, getting fantastic looks, not turning the ball over, and getting to the free-throw line. The Hatters’ defensive performance isn’t as strong, leaving them open to having to play shootouts. However, Stetson is one of the slowest-paced teams in the country, and if they can do that here, they can topple the Gators.