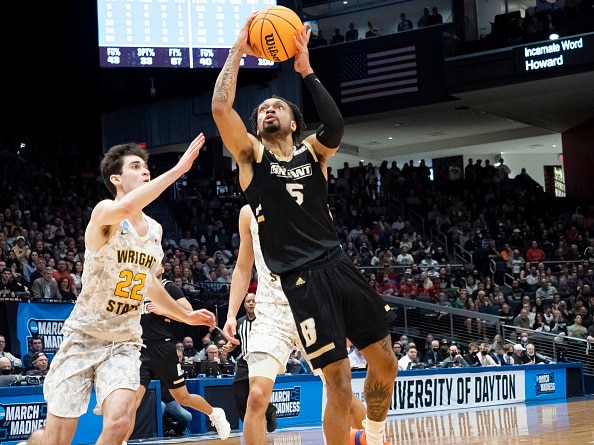 These power conference teams are on college basketball upset watch for week three of the 2022-23 season.

Do you need proof yet that the parity in college basketball is growing? There were a whopping 18 upsets last week of mid-major schools over their power conference opponents. Add that to the total from week one, and we’re looking at 29 thus far to start the season! Upsets are what make college basketball one of the best sports on the planet, and it’s why March is such an exciting time of the year.

Here at college basketball upset watch we had another 2-3 week. Colorado State trounced South Carolina by 30+ and Sam Houston State earned a hard-fought 10 point victory over Utah. As far as the misses, Furman lost to Penn State by 5, VCU blew a lead they held most of the game, while UNCW was the only blowout. The season really picks up with Thanksgiving upcoming, so it’s time for five new programs that should look over their shoulder. Are we bold enough to put the preseason top team on this list?

Perhaps this too easy of a pick by now. College basketball upset watch accurately picked UC Davis’ opening win over the Golden Bears a few weeks ago. Since then, Cal has also lost to UC San Diego and Southern. Throw in a loss to Kansas State as well and the Golden Bears are 0-4 to start the season. Cal turns the ball over a ton and allows opponents to shoot at will from deep, and that’s just scratching the surface of the issues with this team.

Enter Texas State, which has been one of the more consistent programs in the Sun Belt over the past few seasons. The Bobcats dropped a headscratcher to UTSA their last time out, but are still poised to compete as the season progresses. Texas State hasn’t looked great offensively thus far but are one of the best teams in the country at forcing turnovers on defense. That alone should set them up well to continue Cal’s woes on the young season.

We promise we’re not picking on the Pac-12 here at college basketball upset watch. However, the league has by far been the most picked on by mid-majors early on in 2022-23. The Huskies are 3-1, but that loss was one of those upsets, losing to Cal Baptist their last time out. Washington’s numbers don’t scream upset, but teams can find ways to move the ball against that 2-3 zone, opening up quality looks in the paint.

Fresno State’s 1-3 record is a bit deceiving. The Bulldogs have played quality mid-majors to close losses, playing some high-level defense in the process. While Fresno doesn’t force a lot of turnovers, they do force opponents to use up the shot clock without getting points more often than not. The Bulldogs offense is still lagging a bit early in the season, but if they can find some rhythm and play their style, they can knock off the Huskies.

No, your eyes aren’t deceiving you. The North Carolina Tar Heels are on college basketball upset watch this week. The eye test says that UNC has not looked like the top team in the nation so far this year. All of their games have been against mid-majors, and all of them looked like they had a puncher’s chance at one point in the game. There’s no question that Hubert Davis‘ squad will be one of the best throughout the season, but until they get into a flow, they could be prone for a trip up.

The Portland Pilots continue to quietly grow into a more quality program under Shantay Legans. Portland is led by Tyler Robertson, who followed Legans over from Eastern Washington. Early on, the Pilots do a great job of getting to the free-throw line and have a bit of a stroke from beyond the arc. Add in that this game, while part of an MTE, is essentially in Portland’s backyard, and that makes them dangerous. Expect the Pilots to hang tough just like everyone else has thus far against UNC.

It’s certainly been a weird couple of years at Syracuse of late. The Orange have snuck into the NCAA Tournament and made runs, and they’ve also had moments where they’ve looked abysmal. Syracuse is off to a rocky start once more, having dropped a game to Colgate for the second year in a row. The Orange still try to play high-level defense in Jim Boeheim‘s 2-3 zone, but it just hasn’t been as effective as year’s past.

Bryant enters its first year in the America East looking to take the league crown right away. The Bulldogs have become a quiet juggernaut in the New England region under Jared Grasso, and have only dropped a game to another good mid-major team in Florida Atlantic thus far this season. Bryant wants to run as much as possible on both ends of the court. While that can lead to easy looks for the opponent, they can also lead to their own fast breaks. That could be enough to get Syracuse uncomfortable on defense and open up scoring lanes.

This pick comes down to a simple question: which Colorado team will show up in this game? The Buffaloes have impressive victories over Tennessee and Texas A&M, who were both ranked at the time of the games. However, they balance those wins with losses to Grambling and UMass. Clearly Tad Boyle has some pieces to make some noise, but until they can find some consistency, the volatility here makes the Buffs a prime upset candidate.

Yale, at the time of publishing, was off to a quiet 4-0 start. The Ivy League crowned Penn and Princeton as preseason favorites, but let’s not forget that it was Yale who once again represented the league in last year’s NCAA Tournament. James Jones knows how to get the most of out his guys, and the Bulldogs are playing stout defense thus far, surrendering just 60 points or less in all four victories. Matt Knowling is a name to watch, as he’s averaging a blistering 21 points per game early on.