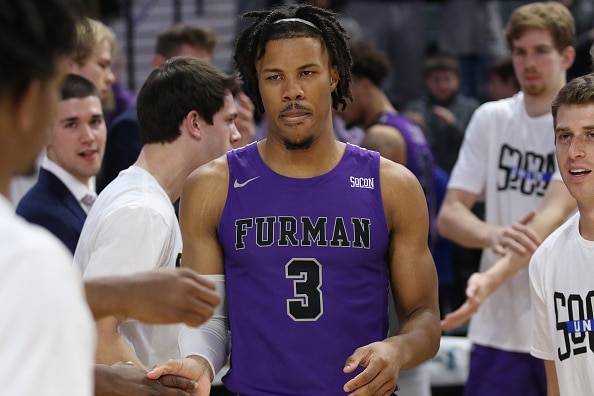 These power conference teams are on college basketball upset watch for week two of the 2022-23 season.

The first week of the college basketball season did not disappoint for upset watchers. While the opening week lacked big, marquee match-ups, it didn’t lack in excitement for mid-major fans. 11 mid-major programs picked up wins over power conference foes, and we here at upset watch picked two of those correctly.

UC Davis picked up their first-ever win over rival Cal, while Wright State picked off Louisville at the buzzer. Detroit and Florida Atlantic played their opponents tough, while Liberty was the only pick that got blown off the court. As we move into week two, here are five more games on the college basketball upset-watch radar.

Oklahoma was one of those power conference schools that took a hit last week. The Sooners fell to a solid Sam Houston State program by one, but also barely managed to squeak by Arkansas-Pine Bluff as well. The Sooners’ offense has been pretty abysmal over their first two games. The biggest issues thus far are getting second chances and holding onto the ball. Oklahoma will eventually even out those kinks, but that’s what non-conference play is for.

UNC Wilmington enters this game at 1-1, with the one loss coming to top-ranked North Carolina. However, the Seahawks fell by just 13 and were competitive throughout the match-up. Trazarien White has gotten off to a hot start, averaging 18.5 points per game thus far. UNCW is not afraid of the moment, plays solid defense, and likes a slow pace. That’s a formula that gives the Seahawks a chance in this one.

Arizona State is off to a 2-0 start, but it took some magic in the last seconds on opening night to fend off Tarleton State. The Sun Devils are projected to have another season in which they miss the NCAA Tournament. Through two games, the defense has looked good, but the offense has committed too many turnovers early. ASU will need to reel those in to be able to make any noise throughout the season.

VCU enters this game with a realistic chance of being the favorites. The Rams will be looking to get back to the NCAA Tournament in a tough Atlantic 10. They have handled their business through two games are doing it on the defensive end in typical VCU fashion. Chaos continues on, with the Rams forcing turnovers at a rate that puts them within the top 10 nationally. That should be enough to walk away from the Barclays Center with a victory.

There is no hotter team offensively than Penn State heading into the second week of the season. The Nittany Lions rank first in effective field goal percentage on KenPom and have been especially on fire from deep. They are being led by a trio of former mid-major standouts in Jalen Pickett, Cam Wynter, and Andrew Funk. That reliance on the three could be a pitfall, though, and, while it hasn’t bitten them yet, PSU is still giving up too many good looks on the defensive end.

Looking for a sneaky good mid-major program? Look no further than Furman. The Paladins are equally as hot offensively as Penn State right now, and that’s largely thanks to the two-headed monster of Mike Bothwell and Jalen Slawson. This is a scrappy group that will fight for rebounds and play sound defense. The Paladins have a chance to make a run in Charleston, and it starts with picking up a win over Penn State.

South Carolina has won their first two games by a combined five points. A close win over rival Clemson makes sense, but only winning by three over South Carolina State? That’s a head-scratcher. The Gamecocks will be a fun follow all season with GG Jackson, but they are also enjoying the services of Hayden Brown, a grade transfer from The Citadel. South Carolina relies on the three ball and lets opponents hit from deep as well.

Colorado State isn’t missing a beat even without their best player in Isaiah Stevens. They eked out a win over Gardner-Webb, but having playing great on both ends of the floor to start the season. Size will be a concern, but if the Rams are knocking down deep balls, that can make up for that. Furthermore, CSU is one of the best teams in the country at sharing the ball. It would not be surprising to see Colorado State and Furman playing for the Charleston Classic Championship.

Utah is in year two of the Craig Smith era, and the Utes have handled their business thus far. Utah has won by an average of 34.5 points per game and are ranking highly on both ends of the court. They like to work it fast on offense and make opponents eat the clock while getting an empty possession. Why in the world are they here then? Well, for starters the offense relies on the three. And, Sam Houston will be the highest quality opponent they have faced yet.

Speaking of the Bearkats, they are already no stranger to the college basketball upset. We’ve already mentioned their win over Oklahoma. It wasn’t pretty, and their offensive numbers on the young season reflect that. However, the name of the game is scoring more than the opponent, and SHSU does a great job of preventing their opponents from getting points. The Bearkats are well-coached and bring a team that will not be afraid of playing a Pac-12 team on the road.