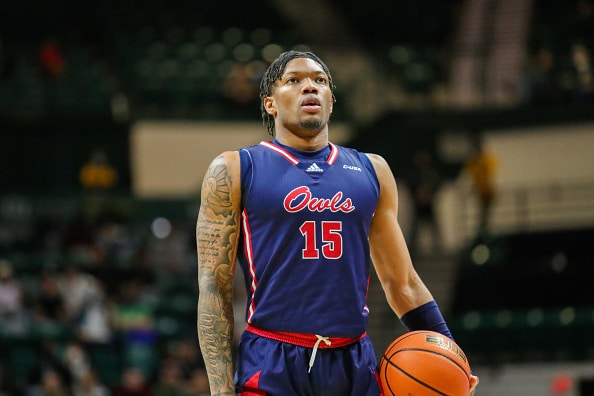 College basketball upset watch is back with new power conference teams on alert.

A new college basketball season is here, and with it comes the excitement of the upset. Mid and low-major teams hunger at the thought of getting their paycheck AND a win on the home court of a power conference team. Truthfully, a college basketball upset helps keep the game healthy and exciting, so we should all be rooting for them throughout the season.

Here are five power conference teams on upset watch against mid-major teams for the first week of the season.

Cal continues to just peddle along in mediocrity in the Pac-12. The Golden Bears lost 20 games for the second straight season and enter the new season without their top three leading scorers from a season ago. Mark Fox will be relying on guys who did not produce much to get the wheels rolling in 2022-23.

UC Davis enters this match-up with an underrated star in Elijah Pepper. Pepper averaged 15.1 points per game while also grabbing 5.4 rebounds per game from his guard slot a season ago. Furthermore, he plays lockdown defense, picking pockets at will. Add in capable big man Christian Anigwe, and the Aggies will have a chance to knock off their university system brethren on opening night.

Earl Grant was brought to Chestnut Hill to turn things around at Boston College. Year one saw a nine win improvement, largely behind the Langford brothers. The future looks like it is on the way up in Chestnut Hill, so the Eagles will not be a pushover like in the past few seasons prior. However, anytime you invite Antoine Davis into your building, that can be trouble.

Davis has been pacing Detroit for four seasons now and is looking to cap off an incredible career as a graduate student. He alone can help the Titans pull this one out. Admittedly, there’s a fairly new cast of characters around him, but that shouldn’t halt his production. As long as he can stay out of foul trouble, Davis can keep Detroit in this one.

Ole Miss stumbled to a 15-19 record last season, but top scorer Jarkel Joiner is gone. The Rebels do have some promising guards in Daeshun Ruffin and Matthew Murrell, and that could be enough to be a bit more competitive in the SEC. Overall, though, Kermit Davis has a young team continuing to build for the future.

Florida Atlantic counters with two top guards of its own in Alijah Martin and Bryan Greenlee. Martin was a breakout as a freshman last year, and there are high hopes about his encore performance in 2022-23. The Owls have yet to finish under .500 under Dusty May, and FAU is the wild card in Conference USA to break into the party at the top. In the meantime, they’ll put Ole Miss on college basketball upset watch.

Nate Oats has put Alabama towards the top of the SEC since his arrival in Tuscaloosa. The Crimson Tide begin the year ranked 20th in the AP Poll, with high expectations once more. It all starts with Jahvon Quinerly, but the supporting cast around him will make Bama an SEC title threat again.

The Crimson Tide know they are starting off tough facing one of the best mid-majors in the past five seasons in Liberty. The Flames have been giant killers under Ritchie McKay, and this team has gotten its pulse the last few seasons from star Darius McGhee. McGhee was one of the best scorers in the nation last season, but he’ll have Shiloh Robinson and Kyle Rode to boost him again as well. Don’t be surprised if the Flames get this done.

There’s no sugarcoating here: Louisville looks like they are in trouble before the season even begins. The Cardinals made news by losing to D-II Lenoir-Rhyne in the preseason, but they also barely slipped past Chaminade as well. New coach Kenny Payne knows he’s in for a full rebuild, but there will be dark times before the light hits the end of the tunnel.

Therefore, inviting one of the top teams from the Horizon League in Wright State seems like a poor draw. The Raiders are certainly in a bit of a rebuild themselves, but Scott Nagy knows how to build winners there. Trey Calvin and Tim Finke will the lead the way, while AJ Braun should take another step forward as a threat in the paint. This is a winnable game for the Raiders in the first week.

One thought on “2022-23 College Basketball Upset Watch: Week One”