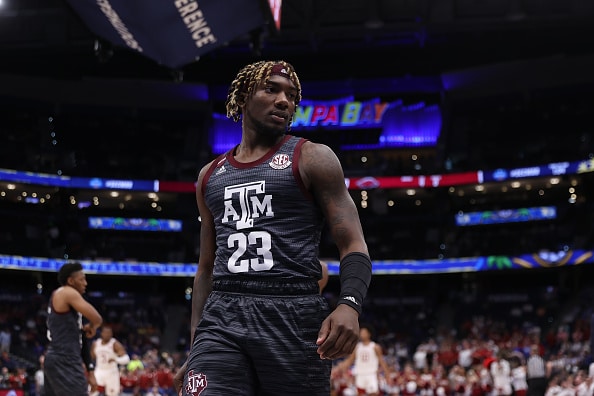 Following a red-hot end to the season for the Texas A&M Aggies, Buzz Williams’s squad is ready and reloaded to make up for last year’s tournament snub.

CBB Review is once again ranking the top 100 teams heading into the 2022-23 season. Each day we will reveal the next team until we reach the team slotted at number one. Coming in ranked number 28 are the Texas A&M Aggies.

From November 1 to January 15 of last year, the Texas A&M Aggies were 15-2. From February 15 to March 31, they were 12-3. But between those dates was a month of listless basketball, where Texas A&M lost eight straight conference games. Such is life in college basketball. One bad spell can turn a tournament team into a bubble afterthought. In what some media figures called the snub of the tournament, a 17-14 Michigan team was selected over the 23-12 SEC Tournament finalists from College Station. While Juwan Howard’s team did make the Sweet Sixteen, an argument could be made that Texas A&M was the more complete team.

The Aggies responded to the snub by taking Xavier to the wire in the NIT finals. Taking the mid year slump out of the equation, Texas A&M had a record of 27-5. In truth, the ability of this year’s team will likely fall between the two extremes. They return 4 of the 5 starters from the NIT run, but lose leading scorer Quenton Jackson. With a solid recruiting class, including some under-the-radar portal pickups, Buzz Williams’s squad is a good bet to cause some havoc in the SEC.

Radford or Coleman could be in this slot, but given Radford’s experience and seniority, he will the nod. The Virginia Tech transfer excelled in his first year at Texas A&M. While his FG% overall took a dip compared to his two years with the Hokies, his defense improved with his highest steal output of his career, (1.2 pg) he averaged almost 3 attempts per game from behind the arc at a 40 percent clip, (more than six times as many threes last year than his first two years combined) and cut his foul numbers even in an expanded role.

This year, with the absence of Quenton Jackson to take effect, Radford’s role will likely increase further. He’s up for the challenge.

According to 247, Obaseki is the 3rd-highest recruit to ever sign with the program. However, watching the first half of last year, there would have been no way to tell. The freshman had a slow start out of the gate, but received a bigger role towards the end of the year during the absence of Marcus Williams from the lineup. While playing in 38 of 40 games, Obaseki averaged 13.1 minutes per game and just 3.6 points. He averaged 1.1 fouls per game, and only hit on 35% of his shots.

If there is a silver lining to his play last year, it’s that he saved the best of it for the last. 2 of his top-3 highest point totals last year were in the postseason, including 14 against Washington State. Given his recruiting numbers, he’ll need to take a larger step this season to make the impact Aggie fans thought he’d have in College Station.

Analytics to Know: 4th in steals per game

The Aggies certainly disrupted passing lanes last year, finishing with 9.7 steals per game, 4th in the nation. 6 different Aggies averaged over a steal per game, and 4 of those players return for 2022. Buzz Williams’s disruptive brand of defense worked well last season, and should again this year. While Quenton Jackson, one of the conference’s better perimeter defenders, is gone, Wade Taylor IV and Tyrece Radford are more than capable of taking his place on the outside. Look for the Aggies to cause havoc on D again this year.

Texas A&M should be improved compared to last year, even with Quenton Jackson’s departure. Henry Coleman III, Tyrece Radford, and Wade Taylor IV will emerge as one of the conference’s best “Big Three”s, as Buzz Williams continues to work his transfer portal magic. The non-conference schedule isn’t as much of a cakewalk as last year, as the Aggies travel to Memphis and take on Boise State at a neutral site location. Texas A&M also plays host to SMU.

If Manny Obaseki takes another leap in his development and Williams figures out the question mark at the center position, A&M could finish in the upper echelon of the league. Look out as well for newcomers Dexter Dennis and Solomon Washington. Dennis, from Wichita State, should be a formidable lengthy presence on the perimeter. Washington is much better than his rating suggests, as he could make an impact almost immediately for Texas A&M. A physical player, Washington fits right into Williams’s game plans.

Especially given how hot the Aggies finished towards the end of last year, it’s certainly possible they could find their way to the top of the SEC standings at some point in the year. An NCAA Tournament appearance for the first time since 2018 is likely, and a Sweet Sixteen appearance could be in the cards.