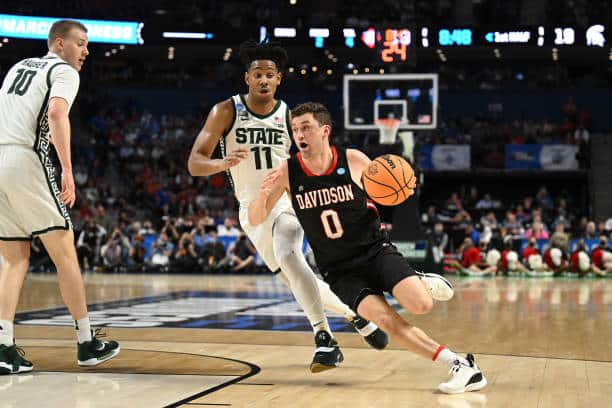 A revamped Davidson Wildcats roster looks to pick up right where they left off last year and make another run at an A-10 title.

CBB Review is once again ranking the top 100 teams heading into the 2022-23 season. Each day we will reveal the next team until we reach the team slotted at number one. Coming in ranked number 68 are the Davidson Wildcats.

A few different bounces and we may be talking about last season’s Davidson Wildcats team way differently. All of their losses except for one came by seven points or fewer, including a two-point loss in the A-10 championship game and a one-point loss to Michigan State in the first round of the NCAA Tournament. They still had a very successful season, led by Hyunjung Lee and Fletcher Loyer.

With three players in the starting lineup gone, Davidson has some retooling to do. Head coach Matt McKillop takes over the program from his father and legendary coach, Bob McKillop. Coach McKillop will look to follow in his father’s foot steps, leading Davidson to success. Another tradition that continues are international prospects at Davidson with the Wildcats boasting two international freshmen this season alone.

2022 Postseason Finish: Lost in first round of NCAA Tournament

Foster found a home with the Davidson Wildcats last year after three years at Michigan State. I’m sure he does not regret it after putting up by far his best numbers in his career. He handled the ball with precision, with a very good assist and turnover rate last season. Loyer was the primary ball handler on a very good team, and he had the highest usage rate. He was paired with big man Luka Brajkovic and wing Hyunjung Lee who both fed off of Loyer well.

Loyer was lights out as a shooter as well, shooting 43.9 percent from three. This ranked 39th in the nation per Kenpom. On top of that, he messed around and shot 93.7 percent from the free throw line, good for the second best in the country. What makes Loyer such a lethal shooter is that his efficiency did not decrease much on pull-up jumpers compared to catch and shoot attempts. Last season, he averaged 1.303 points per possession (PPP) on catch and shoot shots, while still averaging 1.169 PPP on his pull ups per Synergy. Loyer is a bucket and can score in a multitude of ways.

The reliable forward will be the glue guy for this Davidson team. He does a little bit of everything, working from both the post and perimeter. He is a quality rebounder at his size, but also does a good job of taking care of the ball. He does not take a ton of threes, but he has proven that he is capable of knocking them down when open.

Mennenga will look to provide some veteran leadership to a rotation that could have up to two transfers and four freshman in it. He may not be the most essential scorer or defender at all times, but Mennenga fills in where he is needed and will provide stability to the front court.

The Davidson Wildcats have shooters everywhere. Last season they had the 10th best eFG%, thanks in large part to being the fourth best three-point shooting team in the country. Led by Loyer at 43.8% from deep, Davidson had four players shoot over 40% from three last season, with two others shooting above 36%. A lot of the transfers and freshmen fit into this role of shooters, and I expect Davidson to fire them up again this season.

Coach Bob McKillop had a legendary career, but he decided it was finally time for retirement. His son, and current head coach, Matt McKillop looks to take over from pops. He has been on the Davidson Wildcats staff for close to a decade, so he has the experience and knowledge of what it takes to win.

This is a team predicated on their offensive movement and shot making capabilities. Loyer and Kochera project to be the primary scorers, with Mennenga and others filling in the rest.

The Davidson Wildcats have a lot of unproven talent with 4four freshmen and some role players from last season that did not get a ton of minutes. Their depth is really unknown at this point, so it could be what ends up hurting them the most. Freshman Reed Bailey may need to be able to slide into the 6th man role right away, providing a spark off of the bench for the second unit. He is a 6-11 guard that has an intriguing skill set.