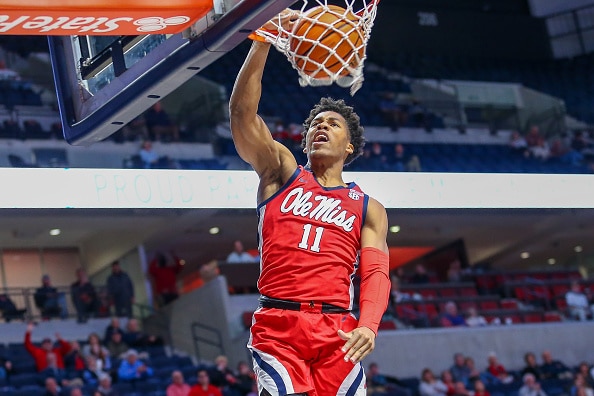 A new season in Oxford breathes a bit of new hope for the Ole Miss Rebels’ basketball team, but coach Kermit Davis is squarely on the hot seat heading into the 2021-22 season.

CBB Review is once again ranking the top 100 teams heading into the 2022-23 season. Each day we will reveal the next team until we reach the team slotted at number one. Coming in ranked number 67 is the Ole Miss Rebels.

The Ole Miss Rebels took a step back last season, going from a 16-12 mark and an NIT appearance in the 2020-21 season to a 13-19 record last year. The losses of Devontae Shuler and KJ Buffen proved too much for the Rebels to overcome, and, despite a couple of ranked wins, cemented Ole Miss into the SEC cellar. The only team behind them in the standings was a one-win Georgia team. Rumblings of a coaching change stayed persistent in the offseason, especially after 6 SEC teams took a turn on the coaching carousel.

But, whether the Oxford faithful deem it deserved or not, Kermit Davis is still the coach of the Ole Miss Rebels and is aiming for a much needed rebound from last year’s disappointing finish. Returnees Matt Murrell and Daeshun Ruffin should anchor a squad that is arguably better than last year’s squad, even with leading scorer Jarkel Joiner transferring to NC State.

To his credit, Davis was active in the portal and the recruiting trail, grabbing former Buffalo Bull Josh Mballa, Jackson State transfer Jayveous McKinnis, and two four-stars. (Malique Ewan and Amaree Abram.) For the sake of his job, they must fill the holes from last year on both sides of the ball. If not, Ole Miss could be giving Kermit some green in return for parting ways at the end of the year.

Murrell is the most consistent offensive threat for Kermit Davis’s squad this upcoming year. The highest graded recruit for the program in the 247Sports era, (per 247Sports) Murrell is ready to become the face of the Rebels this season. During last year’s lost season, the team saw stars Jarkel Joiner and Daeshun Ruffin miss double digit contests, while Murrell suited up for all but one game.

Hailing from Memphis, Murrell led the Rebels to an upset win over his hometown team last season, providing a blueprint of what a successful year could look like for Ole Miss. Murrell hit 4 of 9 attempts from behind the arc, finishing with 19 points in the 4 point win for the Rebels. He’s an electric scorer, and while he’s not a reliable passer, he rarely committed turnovers last year, dropping his turnover rate from 21.4% his freshman year to just 11.0% last season.

Murrell’s defensive numbers aren’t eye-popping, but he plays disciplined and doesn’t commit fouls often. The new additions from the portal and a healthy Daeshun Ruffin should allow Murrell to be less targeted by opposing teams on offense. The team needs to perform well together, and Murrell can be the glue that holds it together.

Mballa, coming off three strong years in Buffalo, will likely step into a starting forward role for Kermit Davis. The loss of Luis Rodriguez means one of the big men needs to fill a major void on the defensive end, and that could be Mballa. Mballa has averaged at least one steal per game every year in his tenure at Buffalo, and while the SEC is a completely different beast than the MAC, Mballa shouldn’t have too difficult of a transition given his production recently.

Out of 358 eligible NCAA teams, the Rebels ranked 346th in overtime scoring margin at -0.4. By the time the season rolls around, Ole Miss will not have won a game in overtime in over 18 months. While these stats could be construed as a team that simply starts games hot, they project more as a team that falls apart as soon as the game hits halftime. Without a significant improvement in all three of these stat categories, Kermit Davis will likely not be the coach of the Ole Miss Rebels by this time next year.

Mark it down ✍️

The good news is that this year’s Rebels team should be better than last year’s. The bad news is that Kermit Davis’s squad last year was one of the worst Ole Miss basketball seasons in recent history. They had only won 13 or less games once more in the last 17 years. Not only that, but the loss of their leading scorer Jarkel Joiner to NC State severely cuts down their backcourt depth, and the Rebels are one key injury away from challenging last year’s loss total.

However, another season in the wings for Matt Murrell and Daeshun Ruffin will help the two emerge as premier offensive threats in the conference, granted the supporting cast for Kermit Davis’s squad play up to their potential.

In the best-case scenario, the Rebels could post a winning record and an NIT bid, but in a suddenly-deep SEC, a lower finish is much more likely for Ole Miss.