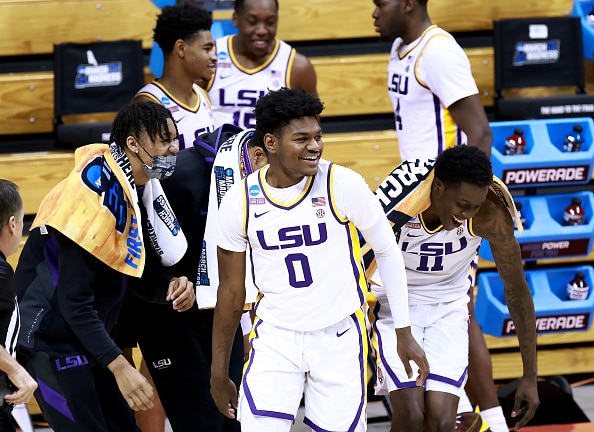 A NCAA investigation has turned the LSU Tigers program 180 degrees, with Matt McMahon attempting to right the ship.

CBB Review is once again ranking the top 100 teams heading into the 2022-23 season. Each day we will reveal the next team until we reach the team slotted at number one. Coming in ranked number 74 is the LSU Tigers.

By the numbers, LSU’s 2021-22 season was not bad. A 15-1 start to the year was masked by a 7-11 finish, but Will Wade’s squad made the tournament yet again, this time as a 6 seed. A loss in the first round to Iowa State awaited the Tigers, however, with Will Wade watching from, presumably, his couch. The former UTC and VCU coach was ousted after the SEC Tournament following a notice of allegations from the NCAA regarding the program.

The notice of allegations came after years of high-stakes limbo games within the LSU Tigers athletic department, in which Wade was suspended at the end of the 2019 season only to be brought back with a new athletic director. The NCAA’s investigation into the program concluded with numerous violations, and Wade was fired shortly thereafter, sending the program into rebuild mode. The university then hired Murray State coach Matt McMahon, but not before every single player from the previous season either left the team or entered the transfer portal. (Although 3 players in the portal eventually returned.) It’ll be a completely new look for an LSU team that has been anything but stable the past few seasons.

Williams was the big get for McMahon in the portal. Sure, Hill and Hannibal are good too, but Williams brings qualities to the program in a position that the Tigers sorely need. A very versatile defender, Williams averaged 8.5 rebounds over his last two seasons at Murray State, as well as contributing at least 1 steal per game the last three seasons. Offensively, he’s a threat as well, averaging 18 ppg last year, leading the team.

A lanky scorer, Williams isn’t known for his three-point shot but can knock one down if needed. The Tigers need a leader, and Williams is just that. They are also in need of a presence down low after the losses of Days, Eason, and Reid, of which Williams can also fill. McMahon will desperately need Williams to perform as well in the SEC as he did in the OVC.

Miller was injured in the offseason last year, and could not play in the 2021-22 season. He was expected to play a major role for the Tigers after a very good season at Illinois. Now, after rehab and a completely new coaching staff, Miller is a very large question mark. He could come back just as good as he was for the Illini, but his supporting cast at Illinois was much better than what he has now in Baton Rouge.

If Miller plays well, he could form a lethal backcourt duo with Justice Hill. But if he struggles after having three coaches in three years of college, it could be a sign for a long season for the Tigers.

Analytic to Know: 1st in steals per game last season

The good news? LSU’s perimeter defense was exceptional last season, finishing first in the nation in steals per game, at 11 per game. The bad news? 6 of the top 7 leaders in steals from last year’s team are no longer on the roster. While it’s unreasonable to expect 11 steals per game again, the Tigers will need someone to step up guarding the backcourt.

That could be stocky Murray State transfer Trae Hannibal, it could be Mwani Wilkinson (averaged 1.2 pg last year), or another transfer guard. The lack of returning production in the steals department isn’t a weakness, but rather simply no longer a strength. This means the Tigers will have to find another way to get stops on the defensive end, and can no longer rely on just getting steals.

A Winning Standard of Performance.

This year’s LSU Tigers team has more experience playing in the OVC than the SEC. Justice Hill, KJ Williams, and Trae Hannibal will form a good nucleus for the team and help the mostly transfer-filled roster adjust to McMahon’s style of play. The talent is there, (two top 100 recruits), the coaching is there, (McMahon) but the roster will need time to perfect McMahon’s brand of basketball and adjust to SEC basketball.

McMahon deserves some credit for turning the roster around in such a quick time frame, but the team still lacks the top-level talent associated with the LSU program over the past four to five years. However, given the way that Wade accumulated the talent, it’s certainly not a knock on McMahon.

For this season, a lower-half finish in an ever-improving SEC is acceptable. In a couple years, or even next year, McMahon could produce a very good team similar to what LSU Tigers fans have come to expect over the last few years, minus the strong-ass offers and NCAA violations.

Ceiling: NCAA Tournament Round of 32