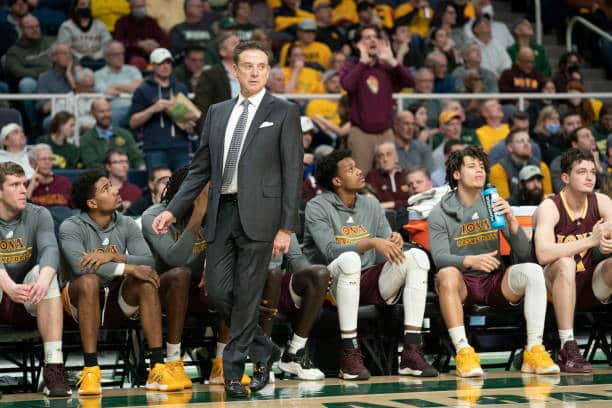 Since Rick Pitino took over as head coach, the Iona Gaels have turned into one of the top low mid-major programs.

CBB Review is once again ranking the top 100 teams heading into the 2022-23 season. Each day we will reveal the next team until we reach the team slotted at number one. Coming in ranked number 75 are the Iona Gaels.

At this point it should be apparent – it doesn’t matter what program Rick Pitino is coaching, he’s going to elevate their status based on his coaching prowess.

Last season, the Iona Gaels were nearly untouchable, especially in the MAAC where they only lost three games. They played everyone tough regardless of how much better they might be on paper. The Gaels only fell to Kansas by 13 and beat then No. 10 Alabama by four.

This season, some familiar faces are back including one player who might be ready to take an extraordinary sophomore leap.

Nelly Junior Joseph is the undisputable leader of an Iona Gaels team that does bring back additional talent. But if you want a do-it-all hard worker who will get you buckets and pull down rebounds, it’s this guy.

Joseph finished second on the team in scoring last season, behind Tyson Jolly. He led the Gaels in rebounding and contributed as a passer. On defense, he was a menace, altering nearly two shots per game, and forcing a turnover per contest.

Joseph certainly could have transferred to a bigger program, but chose to stay in New Rochelle and with Pitino. He gives the Gaels the likely MAAC Player of the Year after he made the All-MAAC team last season. In a conference where guards are often the talk of the town, Joseph is the beast of the bunch.

Will last season’s surprise freshman take over the reins as the starting point guard for the Iona Gaels? He’s got stiff competition, as this year’s top freshman to know, Cruz Davis, turned down offers from some pretty notable schools to come to the MAAC.

However, it’s hard for me to say that Clayton Jr. won’t get the first crack at it. He made it to the MAAC All-Freshman squad last season. With Jolly and Joiner leaving, Clayton Jr. comes back as the top leading scorer among guards.

Right now, he’ll either be leading the offense from the tip or the first man off the bench. Either way, some scoring needs to be replaced and Walter Clayton Jr. seems like the most likely option. He could be in for a major sophomore season.

Despite having a coach who prioritizes defense, and a defensive shot blocker in Joseph, Iona struggled last season on the defensive glass. The Gaels finished in the bottom 20 in PPSC, which measures how a team defends second-chance points.

To be honest, it shouldn’t be a huge issue during the MAAC season. Iona was top three in the conference in opponent points per game, which is really the most important defensive metric when it gets down to it.

Plus, they showed they could compete with the big dogs in Kansas and Alabama, so analytics don’t always tell the full story.

However, it’s still something to note, because if something bends that much, it could also break easier.

Saint Peter’s might have been the story of March Madness, but the MAAC was run all season long by the Iona Gaels. A tournament loss to Rider shocked Iona in their first game, but with the pieces they have returning, there’s no doubt they’ll be right back at the top of the conference.

The most important thing for Iona will be to not get carried away by such a strong regular season. You see it way too often – a team dominates a mid-major conference only to be upset and sometimes pop the March Madness bubble. For the Gaels, it’s all about making the NCAA Tournament this season, because realistically, they’re the up-and-away favorite.

A lot has been said about Joseph, but Iona also brings back Quinn Slazinski and Berrick JeanLouis, two other important pieces of last year’s Iona squad.

Of course, there are some transfers as usual. Daniss Jenkins spent last season at Odessa College but had played two quality years at Pacific before that. Anton Brookshire played sparingly at Missouri and comes in looking for a fresh start with more opportunities for playing time.

Overall, it’s another talented bunch with a clear leader up front, which gives the Iona Gaels all the pieces they need to get back to the Big Dance.