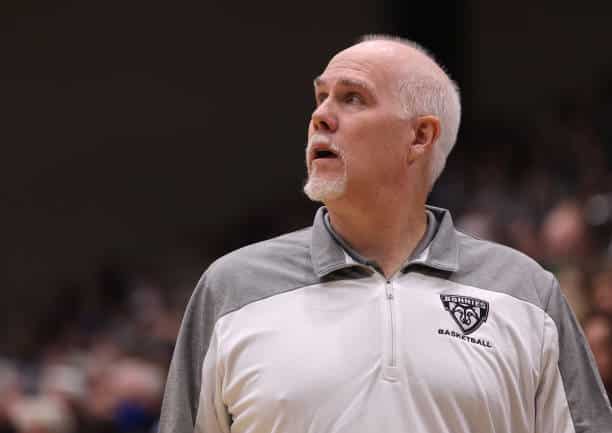 The St. Bonaventure Bonnies saw a mass exodus as multiple program-changers went elsewhere. However, there’s a culture and a lot of new transfers.

CBB Review is once again ranking the top 100 teams heading into the 2022-23 season. Each day we will reveal the next team until we reach the team slotted at number one. Coming in ranked number 90 is the St. Bonaventure Bonnies.

Believe it or not, last season was a bit of a disappointment for the St. Bonaventure Bonnies. While they finished with 23 wins and nearly won the NIT, most people had them as the preseason Atlantic-10 favorites to begin the year. They reached as high as 16th in the AP Poll after defeating Boise State, Clemson, and Marquette. However, they didn’t impress the selection committee enough to earn an at-large bid into the Big Dance.

Look no further than the man who helped Saint Peter’s to an improbable Elite Eight run last season. Now, he’ll try and use that experience in March on the Bonnies.

Banks comes from a Saint Peter’s system that really didn’t value any one person as the point guard. Instead, it was largely by committee. The same can be said about the St. Bonaventure Bonnies, in the sense that they play positionless basketball. Last season, Schmidt used an undersized lineup to his advantage. He might be able to pull it off again with Banks at the two and Moses Flowers at the three.

Banks was the biggest reason why Saint Peter’s started their run in March, dropping 27 points off of five made threes in the win over Kentucky. He also had 14 in the win over Purdue. Now, it’s a step up in the Atlantic-10, but if we learned anything at all last year, it’s to not undermine anyone in college basketball.

I’m going to the projected bench here and taking Amadasun as the guy who could give the Bonnies a major positive. He committed to the Pitt Panthers as a 247sports three-star rated recruit in the class of 2020, but never really saw the floor in two seasons with them.

Now, he takes a step back into the A-10 and does so on a team looking for answers in the frontcourt. Right now, Anquan Hill and Chad Venning have the most prior experience, putting up solid numbers at their previous schools. However, Amadasun just needs that extra boost of confidence, and he could give the Bonnies a jolt. He may not push for the starting job, but he could at least elevate a bench that does look weak on paper.

Analytic to Know: 31st in blocks per game last season

The biggest question mark heading into next season is where the rim protection will come from. Losing Osun Osunniyi is as big a loss as any in the country. He finished eighth in blocks per game as an individual in 2021-22.

Venning comes in averaging a block per game at Morgan State. He’s also a 280-pound beast and should have the starting center job. But Osunniyi has big shoes to fill, so the question remains on whether or not the Bonnies inside will even look remotely the same as last season.

Any time a team loses as many transfers as the St. Bonaventure Bonnies, it seems like a transition year. Most of the guys they lost were also culture guys just looking for a bigger challenge to finish out their college careers.

However, Mark Schmidt is responsible for developing that culture and it helped him bring in a very solid transfer class. The Atlantic-10 will always be tough and there are some teams with proven talent coming back, so it does make the Bonnies look like a middle-of-the-pack team. However, they’ve been a consistent winning program, going for 20+ wins in four of the last seven seasons. They also haven’t finished under .500 since 2012-13.

Never doubt winning programs, even if they look a bit depleted on paper.