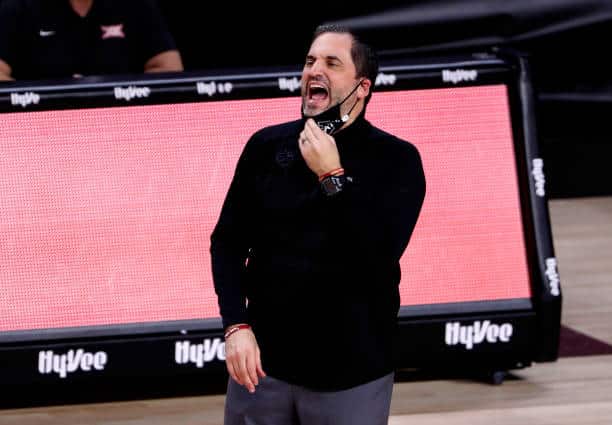 A perennial mid-major power, the Murray State Racers will have a completely different team than years past after the departure of head coach Matt McMahon.

Key players from last year’s Racers squad have joined McMahon in Baton Rouge with the Tigers, but “new” coach Steve Prohm (in his second stint) should be the best chance for the team to reach the tournament again, while navigating new waters in the MVC.

CBB Review is once again ranking the top 100 teams heading into the 2022-23 season. Each day we will reveal the next team until we reach the team slotted at number one. Coming in ranked number 89 is the Murray State Racers.

Despite a .500 record in the pandemic-altered 2020 season, last year’s Murray State squad improved from 13 wins to 31, advancing to the Round of 32 in the tournament before losing to America’s team, the 15th-seeded St. Peter’s Peacocks. After the tournament and a final ranking of 22 in the Coaches’ Poll, coach Matt McMahon left for LSU.

Perry is the unquestioned leader of next year’s Racer squad, after multiple seasons of averaging over 15 PPG at Stetson. The big-bodied (6’4, 210) guard with a similar build to former guard Trae Hannibal from last year’s squad, Perry should help lead the transition into the second Steve Prohm era. He can grab rebounds (5.7 PG last season), and dish the ball as well (2.9 APG as a freshman).

The competition from the A-Sun to the MVC will be a bit of a jump, but Perry has had a few breakout games against higher competition, against both Ohio State and South Carolina. In two conference games, Perry averaged 20 PPG last year. Given the relative lack of exposure of the other members of the team, (five freshmen and only six players with D-1 experience) Perry will not just be the leader of the team but will be forced to carry the Racers on his back for stretches of games.

Burns is the highest-scoring player from last year’s Racer squad to return but is not known for his offensive prowess. Rather, his ability on the boards is his key to success, as he averaged 6.3 rebounds per game last year. Given the departures of key players on the roster, Burns will be required to be much more involved on the offensive side of the ball this year.

An 11.1% usage rate from last season is unattainable with this year’s squad. While his offensive stats haven’t been horrible, and he can’t be at fault for simply not being asked to do much on that side of the ball last year, he’ll need to be an immediate factor offensively for the team to do well.

Analytic to Know: 34th in rebounds per game last season

While Murray State was in the top 20 in the country in offensive rebounds last year, and 34th in total rebounds, they are not a tall team this year. Their tallest player stands at just 6-9, and they don’t have a true center on the roster. Coach Prohm will have to adjust lineups to be able to defend against bigger, more athletic programs. They do have height in the backcourt, (Perry and White) but could struggle on the inside much more than last season.

Murray State is almost unrecognizable compared to last year. Gone is the core of last year’s tournament team, after KJ Williams, Trae Hannibal, and Justice Hill all left for Baton Rouge. While Steve Prohm will more than likely get the Racers back to prominence, (he is tied with Billy Kennedy and McMahon for most wins in a season in Racer history) this year will likely be a rebuilding year. Adding even more uncertainty to the team, they will make the jump from the OVC to the MVC in Prohm’s first year back. Look for the Racers to need at least a year to get back on track in a superior conference. But, anything can happen in Arch Madness, and given LSU’s legal limbo, Murray State likely has a higher chance of making the postseason than Matt McMahon’s new team in Baton Rouge.