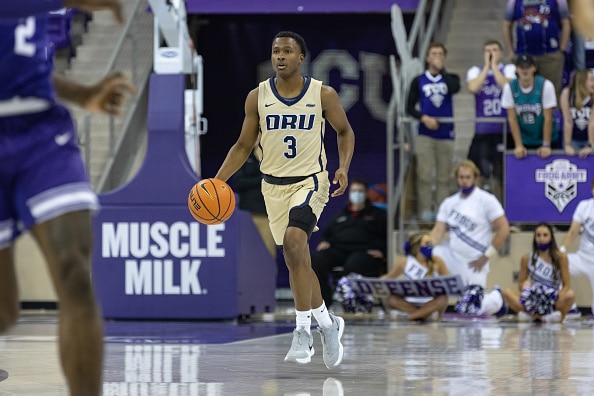 The Oral Roberts Golden Eagles look to rise back to the top of the Summit League in 2022-23.

CBB Review is once again ranking the top 100 teams heading into the 2022-23 season. Each day we will reveal the next team until we reach the team slotted at number one. Coming in ranked number 91 is the Oral Roberts Golden Eagles.

Oral Roberts had what would be considered a down year by their standards. Of course, the standards at ORU only increased after making a surprise Sweet 16 run in the 2021 NCAA Tournament. Nevertheless, the same magic wasn’t quite there last season, with the Golden Eagles finishing tied for third in their league and ending their season in the conference tournament semifinals.

Despite the disappointing end to last season, optimism is running high for the upcoming 2022-23 season. A large part of that has to do with the number of returning players from that aforementioned run in 2021. The talent is still there to make some noise.

There’s no doubt when it comes to who the Oral Roberts Golden Eagles turn to for their clutch moments. Abmas broke onto the scene with his amazing performances in the 2021 NCAA Tournament. Don’t forget that he was also the nation’s leading scorer in 2020-21 as well. His importance to this program cannot be understated. Perhaps the weight put on his shoulders going into last season was a bit much, but there’s no question that he can handle it. Now a senior, Abmas is looking to go out with a bang while also further trying to cement his status as a name that should be called in the 2023 NBA Draft.

Max Abmas is certainly capable of taking over games, but it’s always nice to have some help. The second and third leading scorers for ORU last season actually came off the bench. While that production is nice, a little more assistance from the starting lineup is always appreciated. DeShang Weaver seems like a great candidate to help open things up on offense. Weaver was back in the starting rotation last year and subsequently saw most of his key numbers improve.

If he can take the next step in his game and provide a more consistent scoring threat inside, that could open the floor up even more for Abams to do what he does best. As an added bonus, Weaver was the team’s leading shot blocker in 2021-22, so what he brings defensively can’t be forgotten either.

Analytic to Know: 356th in Assists/Field Goals Made

For those that didn’t know, there were 358 teams participating in Division I basketball last season. The stat above means that the Oral Roberts Golden Eagles did not pass much on their made field goals. That can happen when you often rely on one guy to do a majority of your scoring. Throw in the fact that Max Abmas was also the team’s leading assist man last season, and that’s how you end up ranked almost dead last in this category. For Oral Roberts to return to the postseason, they will need to find a more balanced approach and help out Abmas like what they had in Kevin Obanor in 2020-21.

If there’s one mid-major out there that knows what it takes to shock the world, it’s the Oral Roberts Golden Eagles (no offense to St. Peter’s). Unlike the aforementioned Peacocks, ORU actually has a majority of the guys who made that Sweet 16 run possible still on the roster. That experience is invaluable when it comes to finding yourself in a variety of situations throughout the season.

ORU has not yet released its non-conference schedule, but expect it to be one that will provide the Golden Eagles with their fair share of tests. Aside from that, the Summit League is a tough league that doesn’t get enough credit for how difficult it is to win. If Oral Roberts wants to make a run at anything, they’ll have to improve their results against the Dakota state schools. ORU went a combined 0-5 against North Dakota State and South Dakota State last season, and the league has historically ran through those two programs.

At the end of the day, this team will go as far as Max Abmas can take them. However, their ability to go even further will depend on who can step up and help ease the load off of Abmas’ shoulders. For now, that at least makes them the team to beat in their league heading into 2022-23.