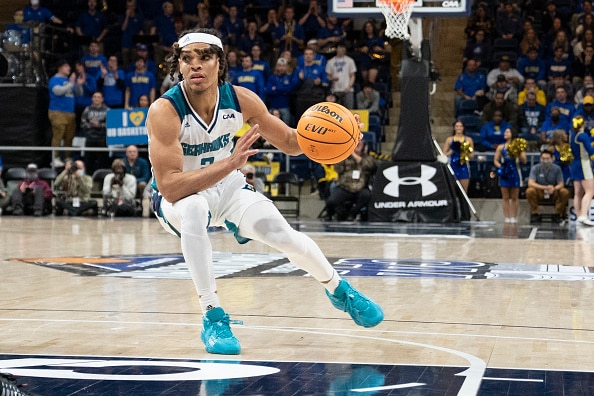 The UNC Wilmington Seahawks hope to build on their CBI title heading into the 2022-23 season.

CBB Review is once again ranking the top 100 teams heading into the 2022-23 season. Each day we will reveal the next team until we reach the team slotted at number one. Coming in ranked number 94 is the UNC Wilmington Seahawks.

UNC Wilmington shocked many last season by tying for the CAA regular-season title. The Seahawks started league play at 9-0, and their season included a 12-game winning streak at one point as well. UNCW rode the wave all the way to the CAA Tournament final but came up four points short of an NCAA Tournament berth. Rather than dwell on the disappointment, the Seahawks turned it into another type of championship, going 4-0 to capture the College Basketball Invitational title.

Takayo Siddle enters his third season at the helm with the bar set high. Siddle will have to try and replicate last season’s success without some of the key pieces, but enough talent remains to keep the UNC Wilmington Seahawks in the hunt for CAA supremacy.

Phillips has already flashed plenty of playmaking ability over his time at UNCW. He was named to the CAA All-Freshmen team in 2019-20 and earned All-Defense honors last season. Phillips wasn’t asked to be the go-to guy with teammates like Jaylen Sims and Mike Okauru around, but with both of them gone, Phillips is the most likely to be the next man up. The best part about that is that Phillips has all the tools to do what the Seahawks need depending on the night. His passing and defense are some of the best in the league. Meanwhile, it’s a safe bet that his scoring average will increase as well. Adding All-CAA to his resume seems guaranteed in 2022-23.

UNC Wilmington was very guard-dependent a season ago, with Trazarien White being the only forward getting any starts. Coach Siddle looks to fill that gap with the additions of van der Heijden and Victor Enoh in the transfer portal. Enoh is a rebounding machine, but the high ceiling of van der Heijden makes him an interesting guy to monitor heading into the new season. Things didn’t work out for him at Ole Miss, but his size alone should provide a boost, and if he can play up to expectations, this could give the Seahawks what they need in the frontcourt alongside Enoh.

As mentioned in the prior section, the UNC Wilmington Seahawks heavily relied on its guard play to win. Good guards win games, as was evident by the 27 wins racked up by last year’s group. However, giving up second chances to opponents makes it a lot harder to do so. Again, Coach Siddle went out and addressed this in the transfer portal with the additions of van der Heijden and Enoh, so this analytic should be expected to improve this season.

The CAA is always a competitive league, and this upcoming season is no different. If you need evidence, just look to the fact that Delaware won the league tournament as a five-seed last season. Add in the fact that the league added four more members (but lost James Madison), and that makes for more fun in 2022-23. Wilmington’s losses won’t be easy to overcome, but the starters that remain and the incoming pieces will allow the Seahawks to try to defend their regular-season title.

As of right now, the UNC Wilmington Seahawks will play two power teams in North Carolina and Oklahoma. The game against UNC is the season opener, while the trip to Norman takes place a week later. They will also play in a tournament in the Bahamas around Thanksgiving. The schedule sets up for a chance at a winning record heading into league play.

That schedule will also allow the rotation to really shake itself out. Phillips and White are the only returning guys with at least 20 starts from last season. Otherwise, plenty of spots are up for grabs when it comes to locking into the starting lineup. Although this was a championship team last season, the Seahawks want to have the right to play for the ultimate prize, and that’s great motivation heading into a new season.

Ceiling: NCAA Round of 32