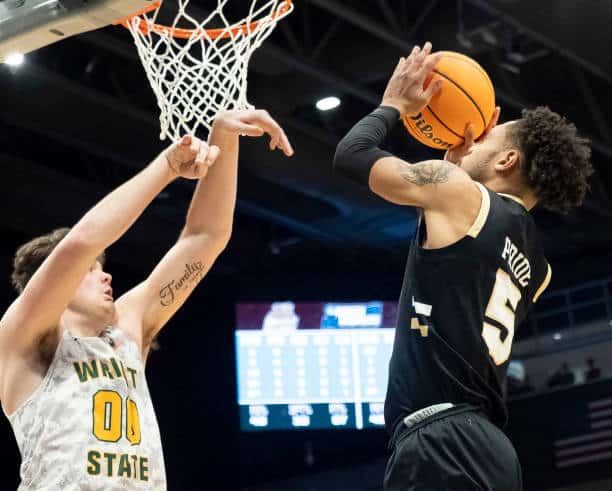 The Bryant Bulldogs lose a fan-favorite in Peter Kiss but got a big splash in the transfer portal and keep an electric scorer in Charles Pride.

The countdown is officially on. For the second straight year, CBB Review has ranked the top 100 teams in college basketball heading into next season. Each day, we will reveal the next team, until we get to number one. Our number 99 ranked team is the Bryant Bulldogs.

Peter Kiss helped lead Bryant to the NCAA Tournament, in 2022, putting the small Rhode Island school on the map. A heavy senior class departed, but the notoriety of making it to March helped Jared Grasso bring in a haul of notable transfers, including former top-50 recruit Earl Timberlake, and March Madness favorite Doug Edert.

Bryant also makes the transition from the NEC to the America East, a small step up in the grand scheme of college basketball conferences.

The “pride” of Smithfield, Rhode Island, Charles Pride does it all for the Bryant Bulldogs. Peter Kiss may have stolen most of the show last season, but Pride should not be overlooked. He’s been a scorer from the moment he stepped foot on campus and will undoubtedly lead his team in scoring this season. Pride has some talent around him, but there’s no question he’s the guy opposing teams will look to stop first.

The former consensus top 50 recruit will play for his third team in three years after transferring from Miami (Fla) to Memphis and now to play with the Bryant Bulldogs. Timberlake gives Bryant some unforeseen star power and hasn’t been a total bust, but just needs the right team to grow with. He’s got a lot of game and the pressure will be lower in the America East, so this could be Timberlake’s breakout season.

Bryant likes to play FAST and won’t lose a beat with Pride coming back for his senior year. Other guards like Chauncey Hawkins and Doug Edert also fit the mold on a team that looks to get up and down the court quicker than anyone they face. Timberlake is a wild card in that system, but the overall theme is a team that wants to score and do so quickly.

Something might be brewing in the Rhode Island water. The Bryant Bulldogs pulled in arguably the best transfer class in mid-major basketball. It isn’t every day a small team from Rhode Island gets a former top recruit like Timberlake, a legend in the making in Doug Edert, and five other transfers who can all put the ball in the bucket.

Hawkins is more than likely to help mend the loss of Kiss, who put up all sorts of numbers last season. Kvonn Cramer and Antwan Walker are two other under-the-radar pickups, as Cramer’s efficiency and Walker’s experience at Georgetown will both be big in the low post in a smaller conference.

They’ll also have to adjust to a new conference, making a small step up in the America East. With yearly contender Vermont not wanting to be dethroned, that battle will be interesting to watch.