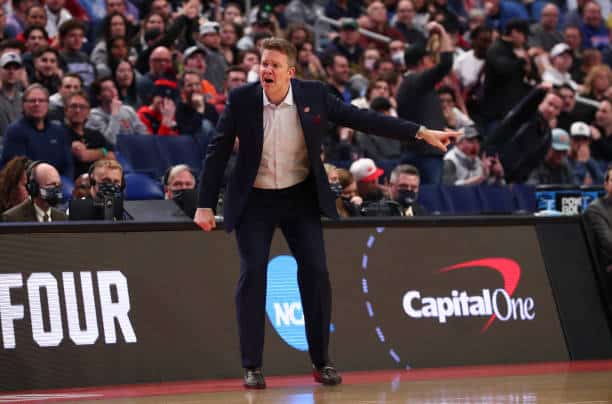 The Richmond Spiders lose a generational talent but do still have a talented roster to compete in the Atlantic 10.

The countdown is officially on. For the second straight year, CBB Review has ranked the top 100 teams in college basketball heading into next season. Each day, we will reveal the next team, until we get to number one. Our number 100 ranked team is the Richmond Spiders.

Moving on from a player like Jacob Gilyard isn’t easy. He could easily be nicknamed as “Mr. Richmond Basketball,” 154 games later and leaving the program as the NCAA’s all-time leader in steals. The Spiders will turn to Tyler Burton to take on the reigns of leading their program.

Burton has been largely overlooked over the past few years as Jacob Gilyard was the popular choice for the credit of the Richmond Spiders’ success. However, for the past two years, Burton has delivered a much-needed scoring punch. The forward can hit from deep and runs the floor as well as any forward in the Atlantic 10. However, what sets him apart is his aggressiveness around the glass.

Can Gustavson run the point? That will be the biggest question mark as to how good the Richmond Spiders can be. Coach Mooney hit the transfer portal and brought in three low-post players. However, the biggest need this offseason for Richmond was to find a starting point guard to replace Gilyard. Either Mooney has complete trust in Gustavson to pick up the point guard position, or someone else off the bench is going to be thrust into that role. Either way, Gustavson came back for another year, so it’s his time to shine with all that Richmond lost.

Analytic to Know: 58th in team assists per game

A big part of Richmond’s success last season was sharing the ball around to find easy buckets. The Spiders were well above-average in assists per game and were first in the A-10. Center Neal Quinn comes in from Lafayette where he dominated as a passing big man, averaging four dimes per contest. But finding a point guard to take over that role will be key to Richmond continuing their great ball movement.

The Atlantic-10 is always a race to the finish line and the Richmond Spiders are blessed with arguably the top frontcourt in the conference. They have the potential A-10 Player of the Year in Tyler Burton and have tons of depth in the post. What they lack is a proven point guard who can make the Spiders a tight-knit unit as they have been over the past couple of years.

If Richmond can figure out their point guard conundrum by the start of conference play, they have the pieces to make a run for the Atlantic-10 title and a second straight NCAA Tournament appearance. However, there could be some growing pains, which would keep the Spiders from dancing again.