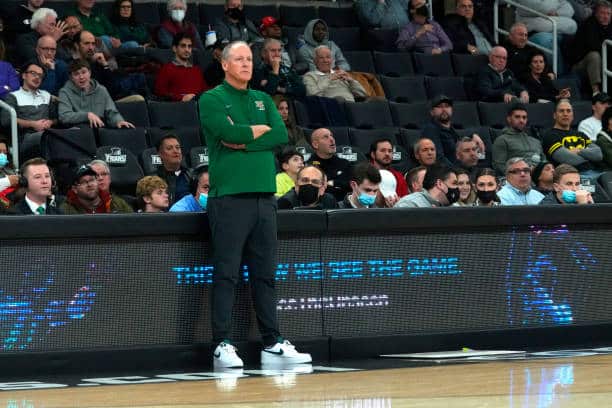 The Vermont Catamounts lose their top four scorers from a year ago but will try and continue their domination of the America East.

The countdown is officially on. For the second straight year, CBB Review has ranked the top 100 teams in college basketball heading into next season. We will reveal the next team daily until we get to number one. Our number 86 ranked team are the Vermont Catamounts

The Catamounts and head coach John Becker really take positionless basketball to the next level. Last season, their starting ‘center’ was Ryan Davis – a 6-8 stretch forward. This season, it’s going to be the same type of makeup, as more than likely, four guards will take turns starting.

Vermont did bring in one very big transfer. Dylan Penn comes over from Bellarmine, where he shined during their first two seasons in Division I. However, he wants to make an NCAA Tournament, and what better place than Burlington, Vermont?

Normally transfers don’t make immediate impacts as the top guy on their new team. However, Penn is a different type of dog and comes to a Vermont Catamounts team in desperate need of a new leader.

The Catamounts lost Ben Shungu and Ryan Davis – two program leaders and the top options in the offense. With no strong candidates for returning players to make a major leap, that’ll most likely be Penn’s job. He scored and made plays at Bellarmine, and will be expected to carry the load at Vermont. The America East is a comparable conference to the Atlantic Sun, so it shouldn’t be a tough transition.

There are some unusual stories in college basketball, and Matt Veretto’s is right up there.

The East Catholic high school product (shoutout to my hometown area) played his freshman year at Delaware in 2018-19. He was a rotation player and actually started 12 games thanks to a very strong performance in his efficiency from three.

But instead of returning for year two, Veretto transferred to UConn where he went back to being just a full-time student. Now, he’s back in the game and in an interesting spot. Even though the Catamounts play a lot of small ball, they are very thin and inexperienced at forward. If Veretto can revisit his D-I days and give Vermont some quality minutes it would make a big difference.

Despite being a team made up of mostly guards and forwards, Vermont knows how to get easy buckets around the basket. Last season, the Catamounts finished in the top 25 in NP%, which measures a team’s percentages of shots right around the hoop compared to their opponents.

Obviously, in a weaker conference, teams can get away with it. But basketball as a whole is turning into a game focused on small ball and the Catamounts always seem to give teams trouble in March.

A big reason for this success is the identity of the Vermont Catamounts. John Becker recruits players who can easily slot in to make the offense flow – despite their adjusted tempo being near the bottom in the country last season. They’ll work the shot clock when they need to and with Penn coming in as a distinguished playmaker, there’s no reason why Vermont won’t continue to get easy buckets down low.

The Vermont Catamounts are pretty much the favorite to win the America East every year. Part of it is due to their continued dominance. If it ain’t broke, don’t fix it, right? They continue to develop players year in and year out.

But they also have proven talent on their roster. Penn should come in and be a first-teamer in the America East. Aaron Deloney, Kam Gibson, and Robin Duncan have all waited for their turns. I wouldn’t be surprised if one of them develops into a counted-upon double-digit scorer this season.

Two freshmen – Jorge Ochoa and Perry Smith Jr. could make immediate impacts in the frontcourt. It just remains to be seen if John Becker will go that route. For a long time, Vermont has been a program that develops players, but this year that could change. Don’t be surprised if Ochoa eventually cracks the starting lineup.

It will be a challenging America East with Bryant coming in with a loaded roster. But Vermont is still the team to beat.