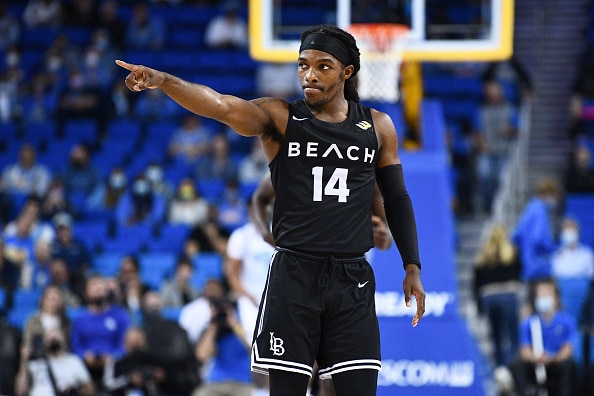 If you’re looking for a leader on the court and a winner, Colin Slater is your guy.

The 6’1 Long Beach State guard from New Orleans has worked his way up to one of the best in college basketball. His versatility on the floor and ability to show up in big-game situations earned him conference player of the year honors.

In this interview, we talk about his season, his team’s huge turnaround, and what’s next.

1) After two years at Tulane, what made you decide to go to Long Beach State?

Colin Slater: Ultimately, I just really wanted an opportunity to play. I wanted the opportunity to get out there and make a difference and help win some games.

2) After a quiet year last year, you took a huge jump this year. What did you work on to get to the level you are at now?

3) You had some crazy performances this year, 43 minutes against UCR, 30 points on good shooting against UCSB, 27 points against then #2 UCLA. What was your favorite moment of the year?

Colin Slater: Let me really dig in here. I would say against UC San Diego at UC San Diego. That was my favorite one, personally. I had 20 in that one.

4) In the coaches preseason poll, Long Beach State was picked to finish last. You guys complete turned the table and finished first. What did this team do to surpass expectations and get that regular season title?

Colin Slater: First of all, to the coaches thank you! As an individual as well as the guys on our team, we don’t forget stuff like that. We saw it, and the temperature in the room kinda rose. We didn’t say anything about it, we showed it. We said, alright, that’s where they have us picked, but they don’t know who we are. That’s why they have us picked like that. Let’s go get it.

We had a lot of growth moments and honesty moments with each other about what it would take to succeed, the amount of sacrifices each one of us would have to take individually in order to see our team have success and what would be more important, individual or team success. We all decided to buckle down, from players to coaches and committed to team success first this year.

5) At 6’1, you stand on the smaller side of college basketball athletes. How do you overcome the height difference and still dominate the game?

Colin Slater: Be smart and be able to understand why things happen before they even happen. I am also able to control the pace of the game at both ends. Pretty much all the intangible things. Naturally, you don’t have the abilities that a 6’8 person would have so you need to be a step ahead in every other aspect to make sure your game goes the way you want it to go.

6) Congrats on winning conference player of the year! What were your thoughts when you won the award and where were you?

Colin Slater: First and foremost, it’s a blessing that people saw me as being the best player in our conference. I’ve always felt like I was a talented player, and for people to respect me and respect my game enough to see me as the best player is an honor. I’m really humbled by it, and it fuels me to go harder and take it even further now.

When I got the news, I was actually about to go see Uncharted, the movie. I was walking in, and I kept getting texts, and they were from people I hadn’t talked to in a while. It was only like 2-3 texts, it wasn’t a lot, and they were saying “Hey, congrats on winning player of the year”. In my mind, I’m like they’re manifesting it. It was pretty late at night it was like 8:30-9, so I was confused why results would come in at this time, someone must be playing a joke.

Then, I go on twitter and see a link that says Big West awards were given out. I click it, was like wow, I’m player of the year. It was crazy, I couldn’t help to be taken aback because for a long time, you don’t imagine that happening and now it’s here. I was blessed though, it was a great moment for me.

7) That conference championship game was tight to the very last second. Take me through your emotions in those last few minutes.

Colin Slater: The last few minutes, I knew that it was getting really chippy. We were in the bonus, and we had a lot of opportunities to get to the line. Ultimately, throughout the game, I knew it was going to be a hard-fought game, but it’s the championship, and we got the best of the other team already, winning the regular season championship, so they’re going to shoot their best shot.

Throughout the game, I would say that both teams showed championship pedigree the whole time, like, one team would go down and the other would fight back and other way around. It was a constant battle and fight, and I would say I was blessed and privileged to be part of a really good game, one of those historic ones as a championship that people remember went down to the wire, and it ended in an incredible fashion. I give them credit to their defensive schemes; they rotated really well, but obviously I would have liked it to go another way. I’m glad the top two teams got a chance to battle it out in the championship and give the fans a good show.

8) What’s the next step in your career?

Colin Slater: The goal is to chase this NBA dream and see where the chips fall, and go from there. My immediate next step is finding an agent, I’m going to be doing that pretty soon. I’m having my last few meetings before I decide what agency I go with. From there, some workouts with some NBA teams and hopefully get into the NBA summer league.

9) What is one thing you want to work on before reaching the next level?

Colin Slater: One thing I would like to work on is really passing with precision and velocity on every pass. I want to showcase that at a consistent rate. Something that scouts should know is that my bag is deep; way deeper than what I displayed this year in the aspect of that I can play in a lot of different ways with different tools. Whether it’s a slowed down game or an uptempo game, onball, off screens, there’s a lot more to my game than a college game could display but we’re going to see it.