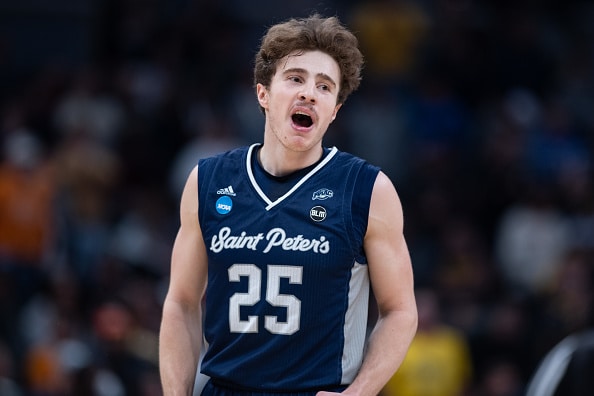 CBB Review has you covered in trying to figure out who to root for in the March Madness 2022 Sweet 16.

The Sweet Sixteen kicks off tonight, and by the end of the weekend, we will be down to the last four teams capable of winning a national title. There’s a good bet that your favorite team didn’t make March Madness or was knocked out last weekend. That means it’s time for you to decide which team you need to hop on the bandwagon for. Don’t worry, we have all the reasons why you should (or shouldn’t) pull for one of the remaining teams.

UCLA isn’t taking anyone by surprise this season. The reality is that UCLA hung around the top 10 of the AP Poll most of the season. This is a team that is looking to make back-to-back Final Four appearances. While that’s no easy task, it wasn’t that hard for UCLA in the 1960s and 1970s. Picking the Bruins bandwagon feels wrong since they aren’t starving for a championship in their program history.

Okay, let’s address the elephant in the room. Yes, there are people absolutely rooting for Coach K to go out as a champion. There are probably equally as many people waiting to rejoice when that does not happen. There’s no question that Coach Krzyzewski has made the Blue Devils into a national powerhouse. The bottom line is that this is a program with five national titles and 11 national title game appearances. That kind of history feels pretty blah to get behind.

Don’t worry, Duke fans, North Carolina isn’t that far ahead of you on this list. The Tar Heels are experiencing life without Hall of Fame coach Roy Williams for the first time in a long time this season. This group has definitely been a bit surprising, reaching the Sweet Sixteen as an eight-seed in Hubert Davis‘ first year. However, we can’t forget their six national titles and 11 national championship appearances. Look elsewhere for a bandwagon.

Give Kansas credit for not staying down long by Jayhawk standards in the Big 12. This group shared the league’s regular-season title and took the conference tournament crown to reassert their dominance. The best story for the Jayhawks during March Madness has been the health and resurgence of key transfer Remy Martin. However, Kansas already possesses three national titles and nine championship appearances in its history. Ride Rock Chalk only if you’re feeling blase.

Where would the Arizona Wildcats be without Tommy Lloyd? Perhaps they would be in the same position, but it can’t be understated how much he has done with the program in his first season. This is the kind of basketball fans want to see being played in Tucson. High expectations mean this once-proud program is returning to the glory that brought them a national title in 1997. The 25-year gap makes it a little easier to choose Arizona if you want.

Yes, Villanova has three national championships under its belt. Yes, two of those have happened within the past six seasons. However, Jay Wright is an easy guy to root for. For that matter, so is Collin Gillespie, who feels like he’s been playing at Villanova forever. Gillespie blew out his knee shortly before March Madness last season, and solely returned for the opportunity to take the Wildcats back to glory. If you like redemption, that would be a great reason to bandwagon here.

Michigan has been a runner-up in March Madness the same amount of times as Duke and North Carolina, but they only have one championship comparatively. All of a sudden, the Wolverines are looking like the team everyone thought they would be in the pre-season. Furthermore, there’s something about watching Hunter Dickinson have his way in the paint against other teams. If you like teams that are peaking at the right time, Michigan is a bandwagon to go for.

Arkansas, like Arizona, is a program trying to find the glory of the 1990s. The Razorbacks won their only national title then, defeating Duke in 1994. Eric Musselman likes to build his team around high-powered transfers, this year coming in the form of guys like Stanley Umude and Chris Lykes. If you enjoy the way the transfer portal has changed the college basketball landscape, pull for this group that can show using it effectively can translate to championships.

Purdue has been to the Sweet Sixteen 12 times prior, but only has one national title game appearance to show for it. The Boilermakers have been a stalwart in the Big Ten under Matt Painter, and it feels like he has a team that can win it all…if they play something along the lines of defense. Jaden Ivey is a joy to watch, while Trevion Williams and Zach Edey form an insane one-two punch inside. Pull for Purdue if you enjoy offense and dominant big man play.

Texas Tech came oh so close back in 2019. You could literally say it was within their fingertips (Too soon?). The Red Raiders have not missed a beat under Mark Adams, and have made it further than former coach Chris Beard. This is a group that plays nasty defense and can make even the best teams look mediocre. If tough defense and a great comeback story are your thing, make sure you get on the Texas Tech bandwagon while there’s still room.

Yes, Gonzaga is the number one overall seed. Yes, that means they should be favored to win the whole thing. However, until they can get over the hump, it feels like rooting for Gonzaga is an easy thing to do. Mark Few is one of the most respected coaches in the game, and he has built this program from the ground up. It’s time to finally earn the one elusive thing that Few hasn’t been able to get. Go for Gonzaga if you want the best team in the tournament to win.

Here is your third Final Four team from a season ago. However, the Cougars look vastly different. Injuries have reshaped this team multiple times, yet somehow Kelvin Sampson just keeps this team on the winning path. Houston experienced heartbreak during the Phi Slamma Jamma era, but this proud program is ready to break through for its first national title. If overcoming adversity and history is your thing, root for Houston during the rest of March Madness.

Now we’re getting into the nitty-gritty. Forget national title games. Providence hasn’t been able to make it past the Final Four. Ed Cooley always has his team ready to compete, and this is a team that has won a lot of close games this season. That kind of perseverance can bode well when every team left is a quality opponent. The Friars want to put America’s smallest state on the map, and winning a national title would certainly do that.

How do you respond as a program after winning just two games in 2020-21? Obviously, it’s by reaching the Sweet Sixteen and spending most of the season ranked in the Top 25. Iowa State’s remarkable turnaround in T.J. Otzelberger’s first season has been nothing short of astounding. Now, the Cyclones are in the running for just their second Final Four appearance ever. If worst-to-first stories get you going, get going on the Iowa State bandwagon!

Looking for a team that lacks March Madness success? Look no further than Miami, a program that has failed to advance beyond the Sweet Sixteen. The Hurricanes upset USC in a classic before handling two-seed Auburn with relative ease. Every win from here on out takes the Hurricanes to new heights as a program. That kind of story feels pretty easy to get behind, so putting your heart with Miami feels like a no-brainer.

Okay, rooting for Miami would be a no-brainer in almost any other situation. However, Saint Peter’s is making more program history than anyone else on this list. The Peacocks have earned their first two March Madness victories ever, and are now trying to become the first 15-seed ever to reach the Elite Eight. Cinderella comes in the form of a colorful bird, and it’s a bandwagon that everyone should be on, because this is truly why we love the NCAA Tournament.