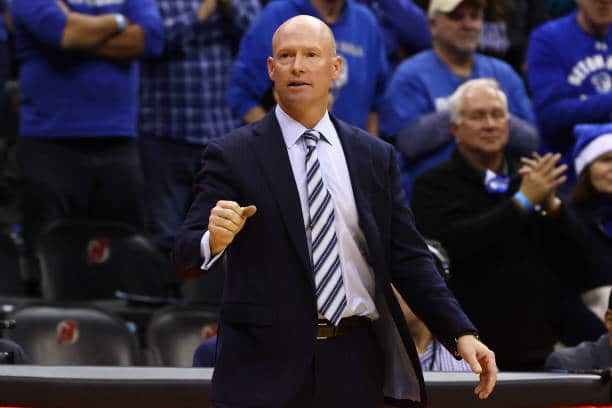 Kevin Willard’s time in South Orange is now through, but there were enough memories for the now-former Seton Hall basketball coach.

It still doesn’t feel real that Kevin Willard is gone from Seton Hall and on to Maryland. No more post-game press conferences at the Prudential Center filled with legendary quotes. We’re through with the annual question of if Willard will jump to a bigger school.

The time is now here – Seton Hall and Kevin Willard have officially separated as he moves on to Maryland. However, he brought so much to the Pirates’ basketball program, a tribute is only right.

November 14, 2010. Seton Hall defeated Cornell at the Prudential Center, 92-68. Does it carry a lot of weight? Nope. But the significance is Willard’s first win at Seton Hall – something he’d go on to do 224 more times in 12 seasons.

Jeremy Hazell dropped 28 points, which was a win in itself given he stayed for his senior year even after a coaching change. Guess that says about Willard, doesn’t it?

This was supposed to be the year of the Pirates, who came into the season with expectations, ranked 23rd in the AP Poll. Despite a typical February collapse that led to an unwanted 8-seed, Seton Hall handled business in November and December.

The Pirates were 14-2 on January 6, picking up back-to-back-to-back-to-back wins against Vanderbilt, No. 22 Texas Tech, No. 17 Louisville, and VCU. SHU also started 3-0 in the Big East, clearly calling out to the rest of the conference to put it on notice.

The Pirates went 8-10 the rest of the season, never able to get back the early-season momentum it once had. One still wonders how different things might have been if Seton Hall would’ve been able to finish somewhere in the realm of 23-9 or 24-8 heading into the Big Dance. Unfortunately, that wasn’t the case for the senior class led by Angel Delgado, Khadeen Carrington, Desi Rodriguez, and Ishmael Sanogo. But they’ll never be forgotten in Pirates lore.

This was the first major win in Kevin Willard’s career, just in his first year at the job.

The Pirates dismantled the Orange, 90-68, showing no signs of being led by a first-year coach against a Hall of Famer.

Jeremy Hazell led the way with 28 points and Jordan Theodore finished with 19 and seven assists. All five Pirates scored in double-figures.

But it was Willard’s defense, which became a staple for his teams, that caught everyone’s eyes. Brandon Triche and Scoop Jardine, two veteran SU guards, were both held to just 11 points. Meanwhile, Dion Waiters was scoreless off the bench.

A 17-game losing streak for Seton Hall at Villanova was snapped as the Pirates took down the Wildcats, 70-64.

It wasn’t a pretty game – Myles Powell got into foul trouble – but the Pirates didn’t abandon ship, using the second half to close out Villanova as a team.

The historic win added another chapter into the rivalry between two of the Big East’s best.

I went to a lot of memorable Seton Hall games during my four years in South Orange and this was by far the win that sticks out the most.

Taurean Thompson stepped up and gave the Pirates a needed boost against the number nine team in the nation. A second-half charge led by none other than Myles Powell (28 points, 4 assists) almost sent Seton Hall home with the win in regulation. But a Keldon Johnson halfcourt shot to beat the buzzer added an extra five minutes.

In that time, Seton Hall didn’t lose focus and it was Myles Cale delivering the winning punch with Kentucky unable to answer. Madison Square Garden agreed with the Pirates.

It will forever be known as the “Sterling Gibbs game” as the Pirates’ guard knocked down a game-winner to take down Nova in the Big East Tournament.

The Hall stymied Villanova’s offense to below 40% from the field. Meanwhile, the Pirates fought on the glass and against a foul disparity, as the Wildcats took 16 more shots from the line.

In the end, it was one of Kevin Willard’s first great upsets and helped kickstart the best rivalry in the Big East today.

The last player in the class of 2014 to graduate was Mike Nzei, who redshirted his first season at the Hall. Boy did he go out with a bang.

Nzei scored 10 points and grabbed three rebounds as the Pirates upset No. 23 Villanova on Senior Day at the Prudential Center. Seton Hall could celebrate one more time with a player who helped give so much in his career to the Pirates.

This might not be one single moment, but rather a long-lasting impression of what Kevin Willard was able to accomplish on a wider scale with the Seton Hall basketball program.

“Kevin came in and immediately changed the culture of our program and built it into a perennial Big East Championship and NCAA Tournament contender with student-athletes who succeed in the classroom and represent the University in a first-class manner,” said Seton Hall Athletic Director Bryan Felt.

Willard came into South Orange inheriting a program left with a sour taste after previous head coach Bobby Gonzalez. Things weren’t looking up for the Pirates, but the coaching change had an effect on the overall culture of SHU hoops. If there’s one thing that means more than wins and losses in college basketball, it’s about having a model program inside the classroom and as young men. Kevin Willard helped make that the core of Seton Hall basketball.

Although it was in an 8v9 matchup, Kevin Willard notched his first-ever NCAA Tournament victory with a 94-83 win over NC State.

The Pirates led by 10 at the break and despite a few Wolfpack pushes, never trailed in the game. Khadeen Carrington led the way with 26 points, while Desi Rodriguez chipped in 20 off the bench. Myles Powell, Angel Delgado, and Ish Sanogo all finished in double figures.

Unfortunately, Seton Hall had to play Kansas in the round of 32, ultimately ending their Sweet 16 hopes. It wasn’t an easy draw for the Pirates, but they did finish the tournament as the leading scoring offense.

Landing Myles Powell was not easy. The 4-star New Jersey product had offers from other top programs, including UConn, Cincinnati, and VCU.

Kevin Willard was able to secure Powell’s commitment to Seton Hall University and the rest is history. Number 13 became a 2,000 point scorer, national All-American, and will be remembered for as many iconic shots in a Pirate jersey as any predecessor.

It was a shame he never got to play in the 2020 NCAA Tournament. Seton Hall was a projected 3-seed by Joe Lunardi and was a popular Final Four pick. Sadly, COVID canceled what could have been a historic run in March. But Seton Hall fans will forever be grateful for Powell’s four tremendous years on campus.

A conference championship may seem minimal to some college basketball programs, but this was a game-changer for the Seton Hall Pirates.

Up until this point, the Pirates were stuck in a rut in the Willard era. Coach was new to town, but not new enough to consider any and all options with his future.

But a largely sophomore-led team mixed with a lone senior transfer found a way to click. They won 25 games and took down Villanova – something that has still only happened twice since the 2015 Big East Tournament. Seton Hall conquered the top cat and went down in Big East basketball history because of it.

This is what got everything all started for Kevin Willard. To this point, he had yet to recruit a premier class and was teetering on the brink of being let go.

If you spent any valuable time listening to coach Willard’s press conferences, you probably heard at least one reference to the 2014 recruiting class. Even the players were well versed about it. Those guys changed the narrative and started something in South Orange, and for that, Seton Hall will always be grateful for Kevin Willard.