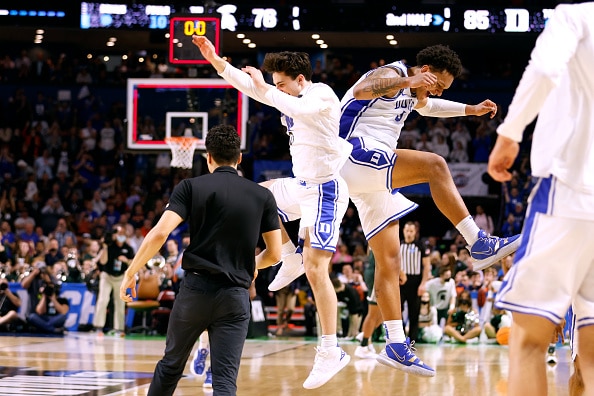 Two rounds of March Madness down, four to go. College basketball has not disappointed yet.

64 teams have now become 16, and in between that we saw some overtime games, huge comebacks, and everything in between. While some were blowouts, many were close games. Since there are 16 teams left, let’s rank the 16 best games, starting at the “worst” and ending with the best.

This game was about runs, and it was anyone’s game until the very end. Only until Jaden Ivey hit a dagger three was the game officially over. This game had a dead period when Texas went on a huge scoring drought, but the second half was a must-watch.

The last game of the Round of 64 was a little closer than people thought, with Colgate making every three and leading Wisconsin well into the second half. Neither team could pull away for a while, but Wisconsin controlled the last five or so minutes and took home the win.

Like the other two mentioned, neither team could pull away, and we had a major upset brewing with Akron controlling the game for the most part, however, UCLA’s Jules Bernard knocked down a few big-time shots and sent UCLA to the Round of 32 and continued their quest for back to back final 4 appearances.

Another case of the game being close, with Vermont cutting the lead down to three with 30 seconds left and two with 11 seconds left. However, Arkansas made their free throws and Vermont was unable to pull off the upset.

America, say hello to the face of #MarchMadness #AggieUp pic.twitter.com/e2yD7KNOAD

The legend of Teddy Allen was born in this one, with the Aggies’ star dropping 37 points. Even with this outburst, UConn kept it close, cutting the lead to three with 37 seconds left. They couldn’t cut the lead down anymore, as Teddy Allen made free throw after free throw to pull off an impressive upset.

This one was a fun one. Coach K vs Izzo, two of the greatest coaches of all time go head to head for the last time. This one had great three-point shooting, hard fouls, and lots of lead changes. That all changed at the 2:50 mark when Duke went on a 12-2 run to close out the game and move on.

This felt like more than a Round of 32 game, with both teams just playing high-level basketball. Kennedy Chandler for Tennessee would make big-time jumpers in timely moments, while Hunter Dickinson of Michigan just dominated the post. Unfortunately, like most Rick Barnes’ seasons do, the Vols’ season ended too early and Michigan stunned everyone and entered the Sweet 16.

A battle of two potential top 5 picks in Chet Holmgren and Jalen Duren battled it out, with both doing things that scouts will love on tape. Memphis actually dominated the first half, and it looked like both of the finalists from last year’s NCAA Tournament would be out in the first weekend. That’s until Drew Timme took over. The All-American scored over 20 points and brought them back into this game and eventually into the Sweet 16.

Another great game here that you can argue should be higher on the list. From the start, neither team could really gain an edge, going back and forth and killing any momentum the other team had. It seemed like Michigan State had it under control, in the end when they took a six point lead with only 26 seconds to go. A few big time shots and a missed free throw had Davidson down one with two seconds left, but they were unable to steal the inbound and suffered the loss. A terrific game all around nonetheless.

This one was all Chattanooga, leading from 39 minutes and 35 seconds of the game. However, no lead is safe in March and it’s not how long you lead, but who leads at the final buzzer that counts. Alfonso Plummer knocked down two clutch free throws, Malachi Smith missed two jumpers, and Illinois avoided a major upset and escaped with the victory. This was a hold your breath kind of finish that everyone loves.

Miami looked in control of this game, leading by 11 at half. It’s a game of two halves though, and USC quickly stormed back to cut the lead to a one possession game and kept it that way. When all looked lost for USC, trailing by 7 with 44 seconds left, Drew Peterson took over.

He knocked down a three, then USC stole the inbound and he knocked down another to cut the lead to one with 26 seconds left and layed it in to tie the game with just 14 seconds left. Just as many late game situations went for Miami this year, Charlie Moore got it done, knocking down two clutch free throws after getting fouled and a Gordon Hayward esque three falling short for Peterson sent Miami to the Round of 32.

Everyone was waiting for this one, and the biggest upset in college basketball this year comes in at number 5. This was one of those games where you were just waiting for Kentucky to take over and go on a big run, but it never happened. Daryl Banks kept knocking down big shocks, and America’s sweetheart Doug Eddert did what it takes to hold off any Kentucky run. When this game went to overtime, St Peter’s kept pushing Kentucky, and the Peacocks were able to shock the world and win this game.

This game kind of lost the respect it deserved since it overlapped mostly with the Kentucky- St Peter’s game, but man was it something special. Creighton kept it within single digits the whole game, but never looked like they had a chance. That was until they held SDSU scoreless for the last four minutes of the game, and it seemed like they used 110% of their energy to fight back and force overtime. In overtime, the Blue Jays kept fighting, and even when their starting center went down with an injury, they kept fighting, and just played a perfect final two minutes to fend off SDSU and bring home the win.

THIS IS JUST NASTY! OH MY! pic.twitter.com/qoaA83yXnx

This game felt like a Final 4 game. First of all, the passion was off the charts. Between Lampkin for TCU and Mathurin for Arizona, you felt like you were ready to run through a wall just sitting at home. Both teams were trading shots back and forth, with Lampkin getting big time put backs and Mathurin knocking down a monster three to tie it up. On the last possession, Mike Miles looked like he got fouled, but a no call led Arizona to a breakaway at the buzzer, and with America holding their breaths, the game winner was waived off.

In overtime, the tempo didn’t slow down. Both teams kept trading shots, and it wasn’t till a monster putback dunk by Christian Koloko that this game was over. Just an unbelievable game throughout.

If you’re not a believer in mid-major basketball, watch this game, because it was about as high level as it gets. Murray State’s Tevin Brown, KJ Williams, and Hannibal kept making NBA level shots and hustling on defense to eliminate fast breaks, and San Francisco’s Jamaree Bouyea would match them everytime, scoring an unbelievable 36 points. Murray State looked like had this one in the bag, taking an 8 point lead with two minutes left and momentum, but a big time three by Khalil Shabbaz and then a three pointer by Bouyea that only a few people in the world can make sent this one into overtime.

In overtime, fans watching the game couldn’t find a team to root for, because both teams just couldn’t miss and were making high level shots one after another. From the 4:37 mark to the 1:17 mark, every possession ended with at least one point, that’s how awesome it was as a fan to watch. Unfortuantely for San Francisco, Murray State was the better team and won the game. Seriously, if you love basketball, watch this game.

You knew it was coming, but this game was absolutely nuts. It didn’t look like it was going to be, with RJ Davis and Brady Manek controlling the game for UNC and the Tar Heels found themselves up TWENTY FIVE with 10 minutes left in the game. However, as every hooper knows, the game isn’t over until the buzzer. A questionable ejection of Brady Manek and some questionable officiating in general allowed Baylor to slowly keep trimming the lead. Suddenly, with 31 seconds left, the lead was only three.

Armando Bacot missed two free throws, James Akinjo got a huge and one, and boom we are in overtime. What seemed like an impossible comeback was achieved, but they still needed to win the last five minutes.

Lucky for North Carolina, momentum shifted back in their favor, and they were able to escape in the overtime period. This is the game that will be talked about for years to come and will be a core memory for any college basketball fan.