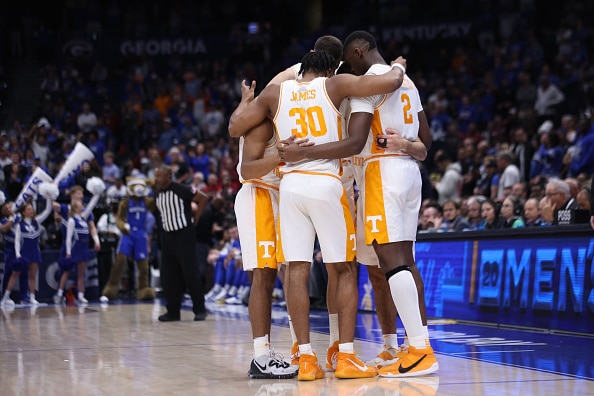 CBB Review hands out awards for each conference tournament in 2022. Up next: The SEC Tournament.

Tennessee halted any Aggie dreams to make the field of 68, beating Texas A&M in the SEC Tournament final, 65-50. The Volunteer defense was smothering, holding A&M to just 32.1% from the field and 21.1% from beyond the arc.

Tennessee’s defense had a masterful three game run, holding all their opponents below 65 points. They held Kentucky, a team that averages nearly 80 points per contest on 48% shooting, to just 62 on 34% from the floor. Texas A&M looked to fit the SEC’s glass slipper, but Rick Barnes and the Volunteers grabbed it and shattered it on the hardwood.

James came into the SEC Tournament shooting just 32.5% from three-point land. He decided to flip the switch, knocking down nine of his 17 attempts from bonus land while still maintaining an above average rebound clip.

James only averaged 9.7 points in the regular season, but his increased shooting percentages in the SEC Tournament can push Tennessee even deeper in the NCAAT.

The Vols are one of my picks to win the whole thing, but an Elite Eight exit makes the most sense for this team. Tennessee has not been past a Sweet Sixteen since the 2009-10 season, and Rick Barnes has only made it into the second weekend once with the Vols.

Tennessee is more than capable of playing deep in the field. They are one of the most complete teams in college basketball and play both sides of the ball well. Not to mention, they have the fifth hardest SOS according to KenPom. The only thing holding them back is lack of experience, both from the players and coaching staff.