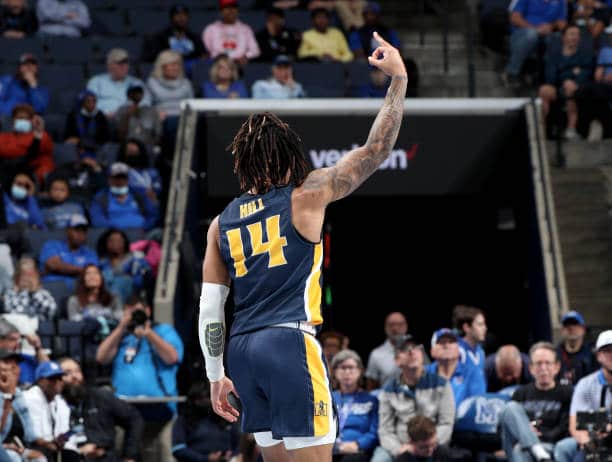 Murray State basketball raced past Morehead State to lock in their NCAA bid with an OVC Championship win.

Fans of the Ohio Valley got a game made full of championship-caliber plays and an extremely competitive effort by both teams. In a game that had a lot of great plays, the game ended with the Racers grabbing a 71-67 win over the Eagles.

Murray State had a hot start, but as all games are, there were runs by both teams. Morehead State had a herculean effort put forth by OVC defensive player of the year, Johni Broome, who put up 32 points (career-high), eight rebounds, and two steals. Broome had some help from Ta’lon Cooper and Tray Hollowell, putting up 12 points apiece.

Hollowell hit a huge 3-pointer at the end of the game on a curl with a high arching shot off the glass to put the Eagles down 68-67. Cooper assisted on that make, and his contributions put him on the OVC tournament team.

Your OVC Defensive Player of the Year ➡️ @JohniBroome from @MSUEaglesMBB

Murray State’s team was really between three players contributing the most. The two offensive players for the Racers were Tevin Brown and Justice Hill. Both put up over 20 points in this OVC Championship. The other big night came from KJ Williams, who came down with ten rebounds. The closing seconds, a call that closed out the game, came off a slight push-off by Broome as he went up for a rebound that was called a foul, and it was a heartbreaker for the Eagles.

If you missed it, here is what CBB Review had done a preview of the tournament. Check it out.

Murray State is feeding off of this energy from the crowd. Need proof? Just look at Justice Hill.

Johni Broome with 32 and counting 😈
Now he’s telling em they too little 💀 pic.twitter.com/58IRwD2p72

The Eagles did a solid job moving the ball to open up the defense of Murray State. Morehead State’s ball movement and unselfish play allowed for easy buckets and opportunities for points. The Eagles could convert a high rate of these easy points, but even playing a great game, it was not enough to overcome Murray State.

Morehead State basketball did so many things right. The team forced tough shots and turned the Racers over 11 times, with six coming off of steals. The areas that the Eagles had their wings clipped were at the free-throw line missing too many and not shooting the ball better from beyond the 3-point arch.

Watching this game, I was surprised at the amount of missed layups, and while the team was around their free-throw percentage average, there were missed opportunities. Murray State is a fast team that plays extremely smart. When the team started missing the easy shots around the rim, the 3-point chances were there, and they took them. The Racers will need to reduce turnovers and have better ball movement in the NCAA Tournament.

Congratulations to the OVC All-Tournament Team

The Racers are the first team to punch their ticket to the NCAA tournament. Murray State will wait a week to see where and who they will play. While the Racers could have potentially made the tournament without winning the OVC Championship, the team wanted to make sure it had its chance to cut down nets. While they wait, the team will be getting fitted for their dancing shoes.