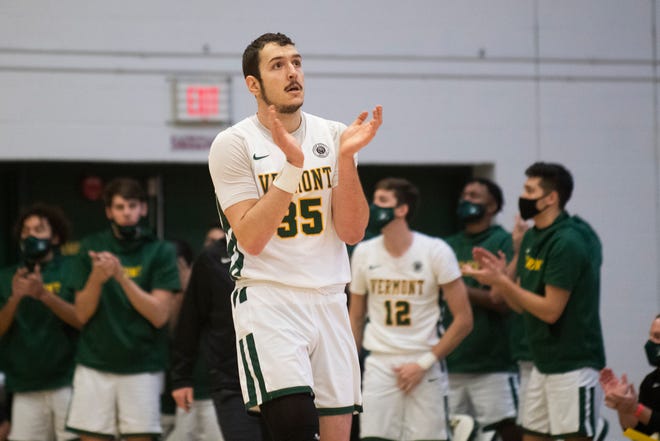 CBB Review highlights the ins and outs of every conference tournament leading up to Selection Sunday. Up next: America East Tournament.

It’s becoming a theme – Vermont running away with an America East regular-season title and looking to take that to March. But as we’ve learned before, they don’t always complete it with a conference tournament championship, and sometimes the teams that do make big things happen in the NCAA Tournament.

In a conference dominated by one team, it’s tough to think of any other scenario for this conference tournament. It all starts with Ryan Davis, who, for the second straight season, was the number one option on this talented team. He’s a major three-point threat.

If there’s anyone that can disrupt this tournament, it’s Tykei Greene. He led the America East in rebounding as a 6-4 guard and also averages over 14 points per game. His three-point shot can also catch fire in a moment.

Shungu is a fifth-year senior who also has a deadly shot from downtown and can offset Davis beautifully. Don’t be surprised if these two go hand-in-hand all tournament long.

5-2 Darnell Rogers has become an internet sensation but his game also does the talking. He’s had some big games and put up a season-high 26 points against Hartford on February 23. Rogers is the most exciting player to watch in this America East Tournament when he gets going.

The America East does its entire tournament on the home floor, and that’s something to watch for New Hampshire. The Wildcats are 10-3 in the conference at home, so a semifinal appearance seems imminent. Then, a matchup with UMBC seems favorable. Although New Hampshire lost at UMBC, they won at home in the second matchup and have won three straight. I’m riding with one of the hottest teams in the conference to make a championship appearance.

Darnell Rogers might be small, but he’s a big talent. Retrievers advance.

Four straight losses for NJIT and it’s going to be a fifth to end their season.

Probably the best first-round matchup, I like the Hawks, who won at Albany last time out, and get this one at home.

I already said it, but I like New Hampshire in this game. Hopefully, the three days in between doesn’t get to these teams.

I picked mostly chalk before and I’m going to pick chalk again. Vermont ends Hartford’s chance at a major upset. They didn’t get to play in 2020, and the Hawks took it in the semis last year. This time, it’s Vermont’s.

Vermont is going to be a popular pick in March Madness to pull off a first-round upset. They can’t look past New Hampshire, and I don’t believe they will. First tourney berth since 2019.