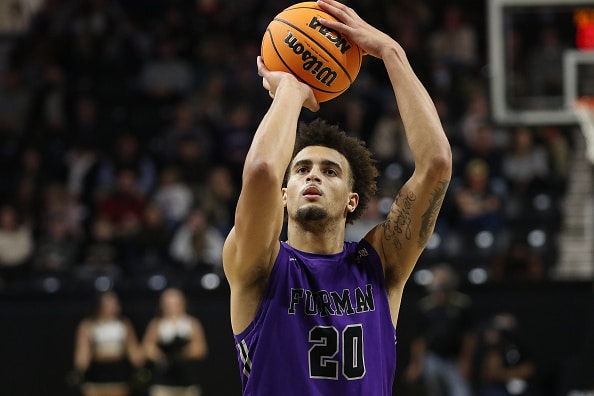 CBB Review highlights the ins and outs of every conference tournament leading up to Selection Sunday. Up next: The SoCon Tournament.

The Southern Conference is one of the most fun mid-major leagues to watch on a nightly basis. The league consistently produces teams that beat power conference foes and is easily one of the deepest leagues out there. Because of all that depth, there is the potential for a surprise champ, even though Chattanooga enters as the favorite.

Malachi Smith is must-watch basketball, period. Smith, just a sophomore, took home unanimous SoCon Player of the Year honors, leading the league in scoring and being the only player to average over 20 points per game. Meanwhile, if you’re looking for a versatile big man, Jake Stephens is your guy. Stephens is as fundamental as it gets down low, but he can also step out and hit a three when needed.

Ques Glover broke out in a big way for Samford this season. The Florida transfer was a unanimous first-team selection, and is a big reason why the Bulldogs captured the three seed this season. Jalen Slawson can do just about everything for a dangerous Furman squad. The league’s defensive player of the year led the SoCon in steals and was also top six in rebounding and assist average. Finally, B.J. Mack has been a consistent threat night in and night out for Wofford, becoming the go-to guy who has magical footwork in the paint.

VMI has seen a resurgence over the past few years under Dan Earl. The Keydets make more three-pointers than any other team in the country. That alone makes them dangerous because if you catch them on a hot-shooting night, it’s most likely lights out for the opponent. Throw in the fact that you also have to deal with Stephens down low, and the recipe for a run is there.

ETSU and The Citadel split during the regular season, with ETSU winning the most recent game a few weeks ago. Both teams have playmakers, but Hayden Brown does just enough for The Citadel to advance.

Mercer, once battling for a top three seed, fell all the way to the seven seed after finishing the season on a three-game losing streak. They haven’t looked the same with the absence of Neftali Alvarez. Still, the Bears find a way, even though WCU will keep this one close.

Chattanooga swept The Citadel in the regular season, and even by SoCon standards this would be a major upset. However, they won’t falter here. The Mocs move on.

These teams just met last week, and the game was a tale of two halves, with Wofford emerging victorious. This should be a fantastic rubber match, with the return of Jake Stephens from injury making the difference. VMI moves on by the skin of their teeth.

Furman swept this series by an average of 22.5 points this season. When the Paladins play to their capability, they can wipe just about anyone off the floor. The neutral court makes this game a bit closer, but Furman rolls to the next round.

After a slow start to the season for both squads, each really turned it on during the month of February. Samford has been a great story this season, but UNCG has played tough in games away from home. The Spartans contain Glover and pull off the upset.

The Keydets have been a tough match-up for Chattanooga this season and even defeated the Mocs without Jake Stephens a few weeks ago. The SoCon Tournament typically doesn’t escape the madness, and this game looks like a huge trap. I’m going out on a limb and taking the upset pick with VMI.

Both times Furman played UNCG this season they scored 58 points. One of those was a win and one of those was a loss. UNC Greensboro wants to play slow, so if Furman lets the Spartans control the pace, they could be bound for an early exit. However, the Paladins learn from those first two games and find a way to advance.

It shouldn’t come as a surprise as we have another split in a series. The difference for Furman when they beat VMI this season was defending the three-point line. The Paladins can smell a long-awaited tournament berth under Bob Richey and clamp down on VMI defensively on their way to their first NCAA Tournament appearance in over 40 seasons.

One thought on “2022 SoCon Tournament Preview”