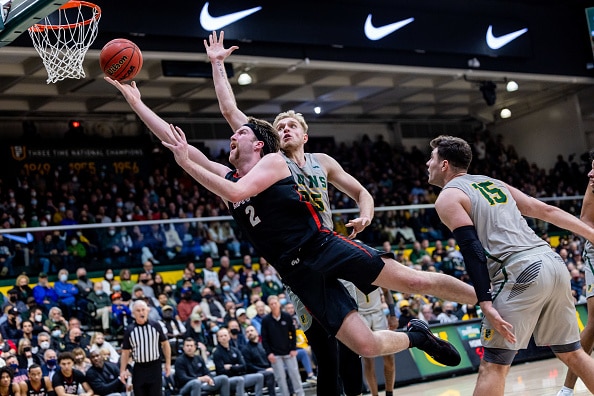 CBB Review highlights the ins and outs of every conference tournament leading up to Selection Sunday. Up next: The WCC Tournament.

For 17 of the last 22 West Coast Conference Tournaments, Gonzaga has hoisted the trophy after the final game. The Zags are ranked the number one team in the country but were just dethroned by in-conference foes Saint Mary’s. Drew Timme, Andrew Nembhard, and Chet Holmgren were named to the first team WCC, with Timme winning the conference’s Player of the Year. Do the Bulldogs have what it takes to bring home yet another conference title?

Check out other conference tournament previews at cbbreview.com

All five of these guys made their way on to the All-WCC First Team, and for good reason. Gonzaga has one of the best frontcourt duos in the country, with conference Player of the Year Drew Timme being the headline, but Holmgren is such a fascinating player.

The 7’0” 195 lbs (listed) center lead the conference in rebounds at 9.7 per contest, but also shot an impressive 43.8% from beyond the arc. He moves his feet well for his size, and what he lacks in strength he makes up for with a long reach and basketball IQ, leading to his 3.6 blocks per game in just 26.8 minutes.

Alex Barcello shoots 44.4% from 3-point range, averaging 17 a game on league leading 2.6 three pointers. Jamaree Bouyea is a guard who shoots just under 50% from the field, something unheard of in today’s style of hoops.

Drew Timme needs no introduction, having a great knack for getting to rim at will and has one of the best post arsenals the NCAA has seen in the past decade. And oh, Jalen Williams leads the league in scoring while also averaging a 2:1 assist to turnover ratio.

St. Mary’s just knocked off top dog Gonzaga at home less than a week ago. The Gaels might not have the juju to beat the Zags for a second time, on a neutral court nonetheless, but they do have a legit Top 25 team. Barring a big upset, St. Mary’s should find themselves in the championship for the WCC Tournament in Vegas with a chance to earn an automatic bid, and, if not, make some noise in the field of 68.

LMU lost its last 10 games before their season finale, where it took down…Pacific. History repeats itself.

San Diego lost 6 of its last 7 before heading into the tournament. But a season sweep of Pepperdine leads us to believe it should not be a struggle to win.

LMU has not won back-to-back games since January 20, and it took an overtime effort to do so. Unfortunately for them, it was not against a team with BYU’s capabilities in the WCC Tournament.

These two squads split their season series, with San Diego taking the first matchup by five at home. Portland found their stride, winning the rematch by 32. This one will be similar to the most recent matchup.

The Dons traveled to BYU and beat them by 14. Todd Golden has the Cougars figured out.

Portland has won 6 of its last 7. Santa Clara has the leagues highest scorer. These teams have only played once, with the other matchup being canceled. Portland has revenge on the mind.

Gonzaga is the favorite in this league for a reason. Take Gonzaga in this game no matter the spread.

Portland has had a nice little run up to this point. However, St. Mary’s is the hottest team in this conference. Will not be close, the Gaels and Bulldogs will have a rubber match.

The league’s two Top 25 teams to square off for the WCC Tournament title. What a storybook ending. Gonzaga will not lose to the same team twice, and have their sights set way past the WCC title.

One thought on “2022 WCC Tournament Preview”