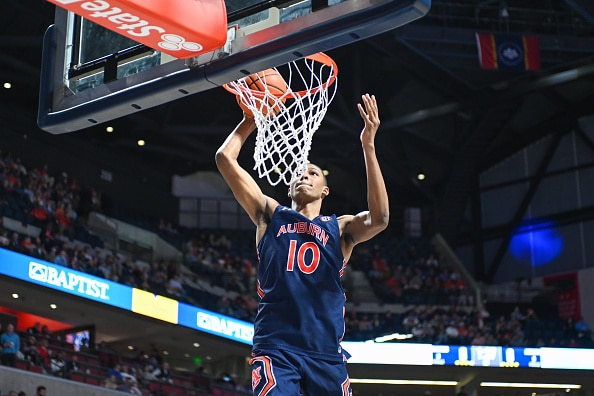 As the NBA hits the halfway point, it’s time to start turning our attention to the future, meaning mock draft season has started.

Unlike last year, there is no clear #1, like Cade Cunningham was from his commitment to Oklahoma State to Draft Day. Many people are calling this a down year, but there are still a lot of exciting young prospects. Read below for a full mock lottery of the 2022 NBA Draft.

People have segmented this draft into a clear top 3 players like two years ago with Anthony Edwards, James Wiseman, and Lamelo Ball. Right now, Smith is the most intriguing prospect. At 6’10, his shot-making ability is extremely impressive, and we have seen him make NBA-level difficult baskets night in and night out. He needs to improve on defense a little more, but his length on the court should allow him to make a seamless transition into the NBA. The Magic really don’t lack at any position since they are so young, but Smith can be a great floor spacer to pair with Franz Wagner at the wing positions.

A big concern coming into college for Holmgren was if he’d be able to handle the upgraded level of physicality that college provides with his 7’0, 190 lb frame. He has accomplished that and more in college, being an absolute monster on the defensive end, altering shots at a high rate, and pretty much eliminating the post presence of any team. He’s been terrific on offense as well, shooting at a high rate from the field and making threes consistently. The Pistons are looking for more pieces to build around Cade Cunningham, and Holmgren would be a great pick and pop contributor to the Pistons.

Rounding out the Top 3 of the “clear top 3” in pretty much any NBA mock draft is Banchero. Like the other two, he has great athleticism at his height of 6’10 and is an underrated passer. His biggest knock is that he doesn’t have as developed of a three-point shot as Smith and Holmgren, but that’s something that we can see change in these upcoming weeks. The Rockets opted against taking a power forward last year and a shooting guard instead, and that has worked out terribly for them, so this year they’ll try again and pair him with Christian Wood to make what should be a solid frontcourt.

For any Big 12 fans reading this, as of now, the NBA Draft is a lot like the Big 12. There is a clear top 3 but in different orders depending on what you look at (Kansas, Baylor, and Texas Tech. Smith, Holmgren, and Panchero), and then there is a clear 4th (Texas, Ivey). Ivey’s first step and explosiveness to the hoop are as good as we’ve seen from any recruit in a long time, and he worked a lot on his three-point and shot-creating ability this offseason and it has shown. Defense remains a minor issue, but his athleticism should be able to help that.

The Thunder don’t necessarily need another guard thanks to the success of Josh Giddey in his rookie season and Shai Gilgeous-Alexander, but Ivey is too good to pass up on. Don’t be surprised if the Thunder either trade up to get one of those three bigs or do what we just saw the Kings do and trade Gilgeous Alexander and run a backcourt of Giddey and Ivey.

AJ Griffin is an unbelievable shooter, making almost half his threes, and it seems like many of them are contested. We have yet to see his true potential because for some reason Coach K has limited him in what could be big-time scouting moments. His game does translate well into the NBA and could end up being the best player in this draft down the road.

The Pacers realistically need a PF/C after trading their star Domantas Sabonis for an up-and-coming star in Tyrese Haliburton. After pick 3, there is a big drop-off, so the Pacers would either be forced to reach for Duren or Murray, trade down, or draft Griffin and make him an excellent 6th man until Buddy Hield’s contract expires.

Shaedon Sharpe represents the group of people who want players to go straight from High School to the NBA. Yes, he has spent the second half of the college basketball season practicing with the Kentucky Wildcats, but when a team drafts him, they will not have seen in-game action from Sharpe in over a year and a half. He has good athleticism and great shooting form but will be a big-time project. He also hasn’t committed as to whether he will end up declaring or returning to Kentucky for his “sophomore” season.

Yes, the last thing the Kings need is another guard, but they need the best player available and that’s Sharpe. At 6’5, he can play the small ball forward as well. The Kings are trying to win and rebuild at the same time, and the potential of having a big three of Fox, Sabonis, and Sharpe long-term is enticing.

Keegan Murray, as well as a few other guys that will lottery selections, are a great case to make that staying that extra year in college instead of going straight to the league after one season can be extremely beneficial. Murray went from a 6th man to one of the best scorers in the country and a potential All-American. He has the ability to control the game and rebounds at a high rate. The only flaw is draft age, but his development already has shown that he could be a special player in the NBA.

The Trail Blazers have two great guards in Damian Lillard and Anfernee Simons, then face a huge dropoff in their roster. Keegan is a great fit and could start from Day 1, something the Blazers are looking for in the draft.

Davis, one of the nation’s top college players exploded into the scene this year and hasn’t looked back. He’s a terrific all-around scorer, rebounds at an extremely high rate for a guard, and is extremely sneaky in the passing lanes. He could very easily end up taking home the Wooden Award and a Top 10 selection in the same year, something not many are able to do.

After trading Derrick White, the Spurs need another guard to pair with All-Star Dejounte Murray. Davis can be a perfect complement and elevate the Spurs back to where they were the last two decades.

The injury bug has hurt TyTy this season, but when he’s healthy he’s shown he’s the real deal. The game to look at for him was a crucial SEC matchup against Tennessee in which he scored 28 points on 10-13 shooting and added five assists and three steals. At 6’3, he isn’t the tallest guy on the floor but doesn’t let that hinder him.

The Knicks are lost, and when you’re lost you draft someone from Kentucky, and that usually works. He’d join two former Wildcats in Immanuel Quickley and Julius Randle. The Knicks need some young guards, as Derrick Rose and Evan Fournier are getting up there in age and Kemba Walker isn’t even playing this year, so TyTy would be a great addition.

With their second top 10 pick in this NBA mock draft, the Trail Blazers go big again and take Duren. Duren has not had the season many people expected, and you can blame his coach Penny Hardaway and the whole situation in Memphis for that, but he has shown glimpses of being a legit NBA talent, especially on the defensive end. He has an NBA frame, standing at 6’10, 250 lbs, and with the right coaching and development, he can become a solid NBA player.

The Trail Blazers are thin at center thanks to Jusuf Nurkic’s constant injury issues, and with him becoming a free agent the Blazers will look to Duren to be the guy and give him the opportunity to succeed. He’ll be paired with a stretch four in Keegan Murray who will allow Duren to operate in the paint and develop at a successful rate.

Agbaji made a really smart decision coming back to school this year instead of going to the draft, going from a mid second round pick to lottery. Agabji is a knockdown shooter with great athleticism. He has developed every year in college and definitely has more growth to show.

The Grizzlies are suddenly in win now mode, sitting at third in the West. Getting a guy like Agbaji who can help right away will be huge for the Grizzlies and he can work his way into the starting lineup early. Ziaire Williams is still a project, so when they need that forward help Agabji can come in and open up the offense even more.

Mathurin is a do it all game, and has been the main reason for Arizona’s surprisingly unbelievable season. He’s a solid three level scorer and is an underrated defender. At 6’7, he has incredible height for a shooting guard. The Wizards have no direction right now, and it might be time to send Bradley Beal to a new home. That would open up an opportunity for Mathurin, and even if they keep Beal he would be a nice option off the bench. He’s still pretty young despite being a sophomore, and would only be 20 on draft night.

Daniels is another project, but arguably the best prospect from that G-League Ignite team. At 6’6, he has good height and is a great defender. The three point shot needs a lot of work, but Daniels is still young and will learn. The Hawks are in a weird position where they don’t need anyone but they’re not winning, so they can take a project here in Daniels. If the Hawks miss the playoffs, then there will be major changes and that could give Daniels some opportunity.

Eason is not talked about enough for how great he’s been this season. He scores at a high rate and has freaky athleticism. Defensively he can be elite and could be one of the best two way players in the draft with his potential. I’m a firm believer that he’s being held back in college and in the right situation he can be elite.

The Hornets also don’t have a direct need and can afford to take a guy like Eason. Eason can play either forward position for them and will be a nice addition to the team.