NBA Mock Draft 6.0: One Week Before the Draft Lottery Predictions 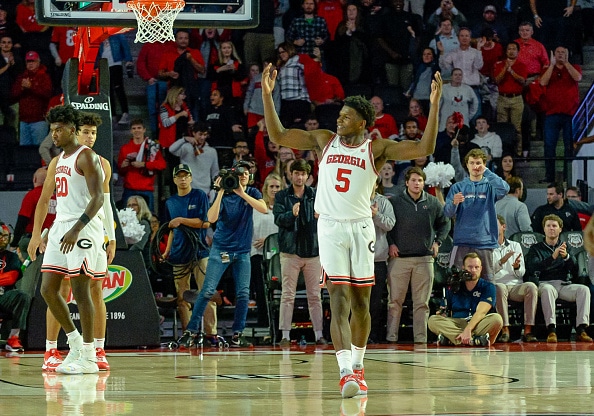 We are one week away from the day we’ve all been waiting for: the NBA Draft. The rumors have started circulating, with the Timberwolves, Suns, Hawks, and Pelicans all making moves. Until then, here is a full lottery NBA mock draft with stats and team needs for each player and team.

Edwards is one of, if not the best scorer in the draft. His ability to drive and his athleticism makes him a scoring threat on any given night, and as he continues to develop could also become a dangerous three-point shooter. Defensively, he’s about average but can improve. The Timberwolves are a little bit of a mess right now besides their two Allstars in Deangelo Russell and Karl Anthony Towns. With Edwards, that gives Russell the ability to become a true point guard once again, which is how he succeeded in Brooklyn and gives them a third solid scoring option. Minnesota is far from a contender yet but this is a great start.

Don’t be surprised if this pick doesn’t belong to Minnesota in a week. They’ve been actively trying to trade down, and there’s a chance a team like Charlotte or Detroit trade up to take James Wiseman or Lamelo Ball.

Since the Warriors dynasty began, they have had an All Star at every position except one, center. Now, with Stephen Curry and Klay Thompson back after missing all or most of last season, Andrew Wiggins still being able to average 20 PPG, and Draymond Green still being a great team player and defensive threat, the Warriors are complete.

At 7’1, Wiseman has the ability to protect the paint at a top-tier level, averaging 3 blocks per game in his short time at Memphis. He also shot an absurd 77% from the field, which will be very important for a Warriors team that scores a lot. He seems like the perfect fit and could be a key piece in their championship run next season.

Okungwu is a very underappreciated big in this draft. At 6’9, he is a little small, but as we’ve seen recently height doesn’t matter. What does matter is that he averaged almost three blocks a game and looked great on the offensive end as well. He’s going to bring much needed defense to this Hornets team while also improving their scoring and rebounding, which they ranked bottom 5 in last season.

The Hornets, like the Warriors are good at every position except Center. They recently gave PG Terry Rozier a big contract, their SG Devontae Graham has one of the biggest jumps we’ve seen in recent history, and their forwards Miles Bridges and PJ Washington have both proven they can be valuable pieces in the future. Complete the puzzle with Okongwu, and the Hornets may see another playoff appearance very soon. If the Hornets do decide to trade up to the #1 spot, they will almost definitely take James Wiseman, but if not this isn’t a bad option at all.

Ball might not be as ready for the league as we thought he was before playing in the NBL, but if he is he has the highest superstar potential of anyone in this draft. He has incredible vision and at 6’7, can also be a great rebounder. What he’s known for is his scoring though. As we remember in high school, he would pull up from half court and swish it, showing off his range. He struggled in Australia with his shot, but once he regains that threat he’ll be unstoppable.

The Bulls don’t necessarily need Lamelo since they drafted a very good point guard last year in Coby White, but there’s no way they can pass up on a guy like Ball. New head coach Billy Donovan has worked with point guards like Russell Westbrook and Chris Paul in his time with the Thunder, so he’ll be a perfect coach to help develop Ball and adjust him to the style of the league. Their star Zach Lavine will most likely move to the small forward position, and the combination of all three of them scoring might be enough for them to win games alone.

When evaluating overseas talent, it’s always hard to fully grasp because the play style is different and these players usually get less minutes (Deni only played 21.7 MPG), but Avdija looks like the real deal. He’s an efficient all around player and will do what needs to be done to get a win. He might not be a superstar after his first season, but with time could be a top 5 small forward in the league.

Cavs have two young guards that they like in Darius Garland and Collin Sexton. At Power Forward, they still have Kevin Love, though his future is uncertain, and at center they recently traded for the best rebounder in the league in Andre Drummond. What they don’t have is a quality small forward, and that is right where Deni fits in. With Kevin Porter showing signs of potential and Deni, they can rotate back and forth and continue to develop together.

Tyrese Haliburton is one of my favorite and could be the most complete player in the draft. He put up great numbers at Iowa State and was nearly part of the 50-40-90 club already. He is great in the passing lanes on defense and knows when he needs to score and when to find the open player.

The Hawks are set at every position, led by star point guard Trae Young. They need depth, and when Trae Young is off the court, they need someone who could fill that role and lead the offense. There have been rumors that the Hawks are going to trade this pick in an attempt to get Jrue Holiday from the Pelicans, but until they do Haliburton would be a great fit.

At this point in the draft, Okoro is the best option available. With his athleticism, Okoro could be an All-Team defender in his career, and he can also score the ball. The Pistons need everything, and starting with Okoro is never a bad idea.

Hayes is every scout’s favorite player. While the numbers might not show it, Hayes is a great point guard. He has a high basketball IQ, and some of the best court vision in recent history. He knows he to make has teammates better and is one of those guys that will do the little things.

The Knicks desperately need a point guard, after the rotation of point guards last year didn’t prove to help. With Hayes, they have that and he will pair well with fellow young players in RJ Barrett, Julius Randle, and Mitchell Robinson. Also, don’t be surprised if the Knicks try to move up a few spots and draft Haliburton or Ball.

Vassell is another one of my favorite players in the draft. He can do it all on both sides of the court, and doesn’t need the ball in order to produce. He’s an effective scorer, decent rebounder, and great defender. Vassell probably has one of the best positive/negative ratio of any prospect, and that says a lot.

The Wizards have Troy Brown at small forward, who is great and makes great vlogs, but not good enough to be their future starter. The Wizards have a lot of question marks, most importantly if they will trade Bradley Beal and how good John Wall will be now that he’s finally healthy. Vassell is a very safe pick, which is what they need with the team they have.

The best player in college last season finds himself in Arizona. An extremely fun player, Toppin is one of the few players in all of the NBA that can win a three point and dunk contest. His defense isn’t completely there, but can develop.

The Suns have a couple small/power forwards in Mikal Bridges, Cam Johnson, and Kelly Oubre. There have been rumors that the Suns are trying to trade for Chris Paul, which means at least one of those three players will be gone if it were to happen. This opens up a spot for Toppin, who can be a great second option to Devin Booker and a would form a great frontcourt with Deandre Ayton. If they do trade the pick to the Thunder, he would be a great fit for them as well.

Patrick Williams doesn’t have great stats, but high upside. He will be 19 for the whole 2020-2021 season and has a lot of room to grow. If he can reach his full potential on the defensive end and learn from Coach Popovich, the Spurs might just get another star through the draft.

It looks like the Spurs are going into full rebuild. Derozan is on his way out, and Aldridge is aging, which leaves a lot of young talent available. Dejounte Murray and Derrick White are two underrated guards, and should be with the team for the future. As soon as they improve their frontcourt, they’ll be a playoff team again, and Williams is the start.

I love Aaron Nesmith’s game. It is very rarely that you see a player shoot better from three than the field, but Nesmith did it on eight 3 pointers a game. He isn’t a great defender but makes it for it with his offensive. He’ll be a great player to space the floor and give the Kings are more balanced offense.

The Kings are in a weird position. Buddy Hield doesn’t want to be there, Marvin Bagley, their former #2 overall pick is hurt more than he’s healthy, and the rest of their team besides De’aaron Fox is very iffy. If Buddy does get traded, the Kings pick up a younger Buddy Hield in Nesmith, who fits perfectly for them.

De’aaron Fox 2.0 finds himself in New Orleans with Zion Williamson. Lewis is quick with the ball and great at driving and finishing, making him extremely difficult to guard. A great defender as well, Lewis is the perfect fit for the team.

The Pelicans do have Lonzo Ball at point, but after some inconsistency, it is unsure how long the Pelicans will keep him. Kira is a much better half court offensive player, and will do a good job at keep the offense at a good pace.

If Anthony had a full season to show off his talent, he would probably be a lot higher. Luckily for the Celtics, they get the great point guard. Anthony is a bucket, and will score when needed. For a guard, he’s also a decent rebounder. If he can reduce his turnovers and increase his efficiency when shooting he could be a steal for the Celtics.

The Celtics are so close to a return to the Finals, and having Anthony off the bench as a scoring option might do it for them. They have an All-Star at point guard at Kemba Walker, but at 30 years old, it is unsure how much longer he can play at a high level. Anthony will work great with the young stars in Jayson Tatum and Jaylen Brown, and having Gordon Hayward as a locker room presence will help as well.

How often do we see a lottery with no Duke, Kentucky, and Kansas players. Only in 2020. Gear up for a wild draft night, and make sure to follow the news, as next week’s mock may have teams in completely different orders following trades.