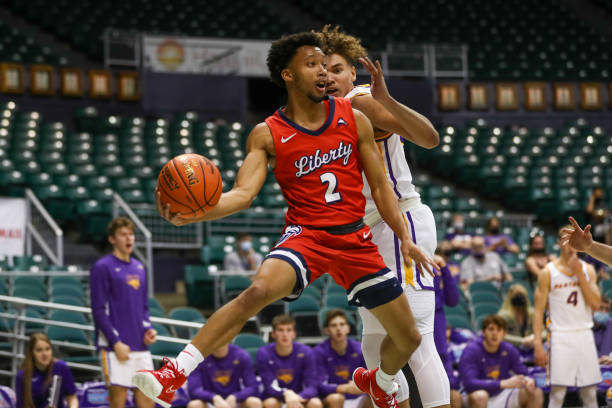 With the NFL just four weeks away from completion, the sports focus will soon shift to college basketball. Why not brush up on these stars before everyone else?

It doesn’t take a brainiac to know who Paolo Banchero or Drew Timme is. They’ve been at the forefront of college basketball all season-low, so if you’ve but consumed an ounce of the sport, you likely have heard their name once or twice. But some college basketball players fly criminally under the radar. You might not even hear their name called until they down a 30-foot buzzer-beater to knock off your team and ruin that (last place) bracket.

These college basketball players have made a mark on the season already, whether you know it or not. So why not learn about them before everyone else and really feel confident about your knowledge heading into Selection Sunday.

In case you missed it, Davidson is 15-2 and atop the Atlantic 10 standings at an unblemished 5-0 in conference. The Wildcats have a ton of unsung stars, but Lee is the most notable. He’s the leading scorer of the bunch at 16.7 points per game, but also rebounds at a high rate, controls the ball, and looks for teammates. You’ll likely hear enough about him before the NCAA Tournament because Davidson is on its way to getting an at-large bid with no worries about needing to take home the conference tournament title.

I spoke with Alex Morales last season and he’s got as much on his plate as anyone in college basketball. The young superstar competes in the NEC with Wagner, which might not be the sexiest of conferences, but Morales game would work just as well in the Big Ten.

The 6-foot-6 scoring guard can’t miss this season – 58.0% from the field, 62.8% from inside the arc, and 42.3% from outside of it. Morales is also a ferocious rebounder from his guard position, where he averages a solid four assists and plays the other side of the ball. Wagner will have to win the NEC to get in, but Morales will be an issue for any team that has to try and stop him.

If you’re going to have a conversation of the most under-the-radar scorers in college basketball, Mosley should be right at the pinnacle.

The Missouri State star has hit the 30-mark four times this season but has been on a tear as of late reaching 32 or more in three of the last four games. A 43 point outing against Northern Iowa was is highest.

The Bears are also 14-6 (5-2) and certainly in a fine position to win the Missouri Valley Conference over the favorite, Loyola-Chicago.

If Mosley is the underrated scorer of this bunch, Parker is the playmakers who no one knows about. A few years ago he set the Division One record with 24 assists in a single game. That wasn’t a fluke – Parkers hit the double-digit mark twice this season. In back-to-back games, he notched 14 assists and 20 assists.

Now the Big Sky isn’t going to get Montana anyone above a 15-seed at best. But the Grizzlies are above .500 and one of the favorites to represent in March. Finding open teammates in creative ways is hard to stop, so if Parker’s guys can make open shots, watch out.

I’d like to think Roddy is known pretty well inside the college basketball community, but outside of it, he hasn’t quite reached the level of household name just yet.

Roddy’s improved every year and that’s culminating in an unbelievable season in which he’s averaging 19.0 points and 7.7 rebounds per game. His Colorado State Rams are 14-1 and right in the mix to take home the Mountain West Conference. I had them as a 10-seed last Sunday, so keep an eye on Roddy and the Rams going forward. It’s almost a certainty they’ll be there in March.

While Cameron Parker can explode from time to time, Moore is much more (nice pun there) consistent with his numbers, for what it’s worth. He’s had 10+ assists on seven different occasions this season.

What makes Moore even harder to guard is he’s not just a passer. Oakland is a hard team to stop because Moore is arguably their best scorer. When you can dish out 14 assists in one game and put up 24 points two contests later, you’re an absolute animal on the court.

I stayed away from power conference players until now. When people think of the Big East, Collin Gillespie, Julian Champagnie, and Jared Rhoden are some of the names that come to mind. But what Adama Sanogo is doing for a UConn Huskies team arguably in the best position for seeding of anyone in the conference, is ballistic.

Take a look at Sanogo’s production the last three games:

A lot of people likely know Darius McGhee already, but they’re really going to know him this March. I feel pretty confident that Liberty, who’s 12-6 (4-0) will earn the Atlantic Sun’s automatic bid into the Big Dance. And if they do, McGhee is going to be that mid-major bucket getter to watch.

First off, when you average 23.0 points per game, you’re a top-notch threat to drop 30 on anyone in college basketball. And McGhee can take it to an even higher level. How about 48 points against Florida Gulf Coast and 41 on Stanford. McGhee doesn’t force up shots either – he shoots 48.1% from the field, a really good number for a guard.

I’m not sure if there’s any player who’s had as many unworldly statlines as Aimaq this season. And I’d know that because it seems like every other day we put out a graphic for his ridiculous numbers. They include 34 points and 14 rebounds against Pepperdine, 24 points and 22 rebounds on BYU, 21 points, 16 rebounds, and 5 blocks against Tarleton State, the list goes on and on.

Utah Valley’s odds of making it to March’s biggest stage are solid. It’s been a rough 2-3 start in the WAC but 11-6 overall shows the Wolverines are a capable ballclub. They knock off New Mexico State and boy do we have a player no one is going to want to match up against in a single-elimination bracket.

The ACC has nearly fallen off as Duke has been the only team able to stay somewhat relevant nationally. But Wake Forest is a quiet 15-4 and it can all but be attributed to Williams.

The Oklahoma transfer is putting up conference player of the year numbers with 20.3 points, 6.8 rebounds, 5.2 assists, and 1.2 steals per game. He’s turnover-prone – but he’s a game-changer and when it gets to March, if you aren’t prepared to guard him, Williams will expose you.