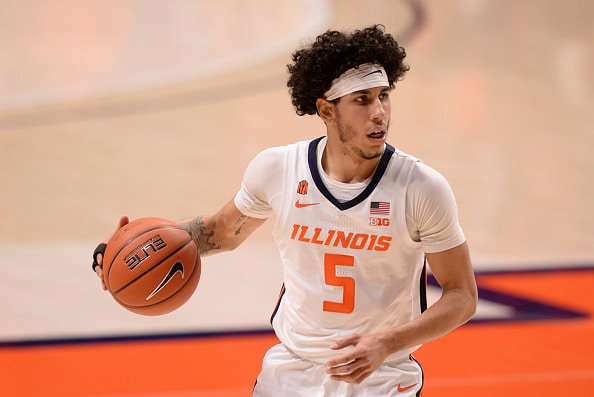 Andre Curbelo started out the season not meeting expectations. Now, he’s back after missing ten games due to a concussion.

After being named a preseason All-Big Ten conference candidate, Andre Curbelo had a slow start to the season, averaging 8.7 points with four turnovers to start through the first four games. Early in the season, Curbelo was diagnosed with a concussion which led to him missing ten games. On MLK Day, Curbelo came back, and that’s where the Illini fan’s hope begins.

Illinois played and lost to Purdue in what was a double-overtime thriller, 96-88, but the story of the game was how Curbelo, who was finally cleared, got to step in and play.

Coach Brad Underwood only expected to play him 6-8 minutes, however, that was soon dashed as his performance made it tough to take him out of the game. Curbelo earned 26 minutes off the bench, going 8-of-15 from the field and 4-of-5 from the free-throw line, scoring 20 points to go along with six rebounds and three assists with zero turnovers. Curbelo was the player that gave the Illini hope to even take the game this deep into two overtimes.

The sad trip to College Park

Against Maryland, without Kofi Cockburn, Illinois lost 81-65 in a sad showing for the Illini hopeful who wanted a bounceback win. Before the game, many thought Andre Curbelo was going to develop into an incredible point guard, with the matchup against the Terps as a potential breaking out party.

However, in just 14 minutes, Curbelo had only four points on 1-of-6 shooting and 2-of- for the charity stripe along with four rebounds and an assist. Curbelo also turned the ball over three times and had four fouls. Nobody knows the type of player he will be on a nightly basis, as that was a big difference from the previous game.

So where will Illinois finish?

If Kofi and the team stay healthy, Curbelo limits his fouls and turnovers and they stay out of foul trouble, their ceiling could be making it to the Final Four in Houston. Right now they’ll probably end up somewhere from a 3-6 seed, but they most likely won’t make it past the Sweet Sixteen.

On any given night, Andre Curbelo can win the game for his team, or the adverse and make it severely more difficult to win. Depending on how much he matures in the next two months, that will be the difference between a potential early exit and lasting until the final weekend.