College Basketball: 5 Upsets To Look For in Week Two 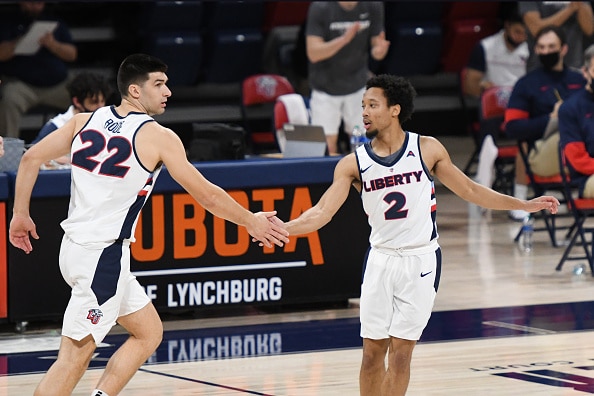 A new week of college basketball means new teams that should be wary of losing a buy game.

The first week of the college basketball season has come and gone. It feels good to see fans back in gyms and balls going through nets again. It also felt good to see power conference teams losing to mid-majors. The biggest belongs to Navy, who took down previously 25th-ranked Virginia. That’s just the icing on the cake of a week of struggle for the ACC. Miami of Ohio toppled Georgia Tech. And, in the first edition of this series, I correctly called The Citadel over Pitt and Furman over Louisville, continuing the league’s woes.

After week one, my record stands at 2-3. Close losses by Vermont and Buffalo almost helped me out, while Louisiana Tech took a beating at the hands of Alabama. Here are five more teams that are on upset alert in the second week of college basketball.

LSU has started the season on fire. More specifically, they’ve set two Sun Belt teams on fire. The Tigers blasted Louisiana-Monroe to the tune 0f 101-39 on opening night before dispatching Texas State 84-59 three days later. Darius Days is already averaging 23.5 points per game on the young season, including shooting a blistering 73.3 percent from deep. With all that being said, Liberty will be a step up in competition.

The Flames obliterated non-DI Regent 85-24 in their only game so far. A tune-up, to put it kindly. Liberty is led by Darius McGhee, who put up 21 points in just 16 minutes of action in their opener. Clearly, this group didn’t need their starters much, meaning they will be well-rested coming into this match-up. Liberty has terrorized the SEC over the past few seasons, including wins over Mississippi State and South Carolina in 2020-21. Ritchie McKay will have his team prepared to come out with a victory in Baton Rouge.

The Washington Huskies are coming off a five win season and already own a loss to another group of Huskies in Northern Illinois (who are also an uninspiring pack of dogs). Mike Hopkins‘ seat has to be feeling pretty hot, even in a cool place like Seattle. Washington has largely relied on a seven man rotation early, led by Terrell Brown‘s 16.5 points per game. A game against a SWAC team would appear to be just what the doctor ordered.

Except Texas Southern isn’t your ordinary SWAC team. The Tigers don’t shy away from playing big name schools year in and year out. They took down Michigan State back when the Spartans eventually reached the Final Four in 2015. They also took down Baylor and Pac 12 rival Oregon in 2018. Speaking of Oregon, they only lost by 17 to the Ducks on opening night. Johnny Jones has nine guys averaging at least 13 minutes per game early, and also has a one-two punch in John Walker and Joirdon Karl Nicholas down low.

It feels like South Carolina is a long way from their Final Four run in 2017. The Gamecocks have struggled to go .500 in each season since, including a 6-15 showing last season. Things have already started rough, with Frank Martin‘s group dropping a contest to Princeton last Friday. The Tigers are a solid team, but that won’t matter to the Gamecock faithful. Before South Carolina even gets a crack at UAB, they could potentially drop another game to Western Kentucky.

However, the focus here is on the match-up with the Blazers. Andy Kennedy‘s super team of transfers is off to a good start. They blew out UNC Asheville by 25 and then took down last year’s OVC champs Morehead State by 14. Jordan Walker is picking up where he left off at Tulane, averaging 21 points per game thus far. Oh, and a few of those aforementioned transfers have experience in the SEC. A win over South Carolina won’t move the needle tremendously, but it could be a good data point in March if the Blazers are fighting for an at-large bid.

No, I’m not picking on the Pac 12 this week. After all, the numbers speak for themselves. And Cal’s numbers are not good. The Golden Bears are already 0-2 and averaging just 59.5 points per game, ranking them 321st in the country. One of those losses came at the hand of UC San Diego, playing just its second year at the Division I level. Jordan Shepherd and Andre Kelly have been trying their hardest for Mark Fox, but Cal is just not in a good spot at the moment.

Southern Utah may just add salt to the wound. The Thunderbirds did take a disappointing loss to Dixie State in week one, but this group is the favorites in the Big Sky and are already deploying a ten man rotation of sorts. Dre Marin, John Knight, and Tevian Jones form a deadly trio in the backcourt, and that kind of guard play alone will be good enough to knock any remaining shine the Golden Bears may have.

No, I’m not picking on the SEC this week either. Truth be told, picking against LSU is the biggest limb I went on. However, the bottom of that league is easily susceptible to college basketball upsets. Vanderbilt does sit at 1-o heading into this week, but they beat a not-so-good Alabama State team. The one thing to see here is future NBAer Scotty Pippen. He’s back for his third (and probably final) season in Nashville. There’s not a lot here that inspires confidence otherwise.

Winthrop has been a model of consistency in the Big South over the past few seasons. That may have gotten Pat Kelsey a new coaching job, but the Eagles are still a formidable group under new coach Mark Prosser. It all starts with DJ Burns this season, who is off to an average of 23 points and seven rebounds per game in wins over Mary Baldwin and Mercer. I just don’t see anyone who can fight with Burns down low on Vanderbilt. This screams college basketball upset, even if it feels like Winthrop might be the better team.

One thought on “College Basketball: 5 Upsets To Look For in Week Two”