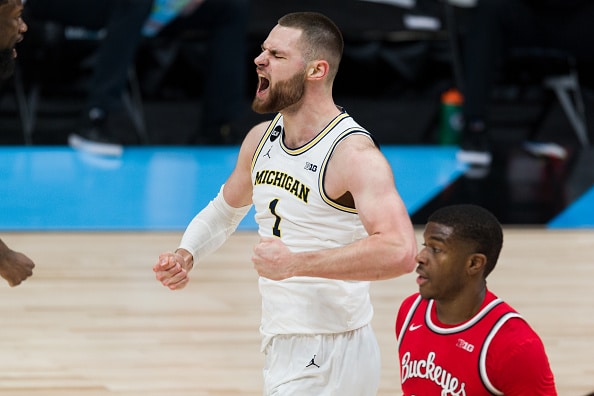 Michigan Basketball loses a lot of talent from last year’s squad, but the #2 recruiting class, an elite transfer acquisition, and the return of Hunter Dickinson make this team a championship contender.

Michigan basketball shocked themselves and the whole country when they were upset by the 11 seed UCLA Bruins in the Elite 8 last year as a one seed. They lose 5 of 7 of their top scorers from that team, but have retooled to what can be an even better team this season.

That starts with receiving a commitment from the Sun Belt player of the year Devante’ Jones, who is one of the top transfers in the whole country and can score at ease. Add on two top 16 recruits and 4 top 50 overall, and you’ve got yourself one of the most dangerous teams not only in the Big Ten, but all of college basketball.

.@TheAndyKatz lists his top 5 returning players on the #MM365 pod! 🔥

Although being a high recruit coming out of high school, no one expected him to be this much of a force in his freshman season. Dickinson was the best player on a team full of NBA and college talent and earned himself second-team All-American honors. He comes into this season as the best sophomore in this country, and his sheer physical presence in the post is a big reason why.

When Dickinson gets in the post, it’s probably resulting in a bucket, as he shot just under 60% from the field and an impressive 74% from the free-throw line as a big man. He’s a beast on both sides of the board, but specifically, the offensive glass where he averaged 2.2 offensive rebounds. While the stats are impressive, he impacts the game on a much bigger level than the stats showcase, as Michigan fans can second that statement. He’s a top-four if not top two big man in the league next year and is a big reason why Michigan basketball can be so good.

At Coastal Carolina the past two seasons, Jones was one of the best mid major scorers in the country, averaging 17.4 points per game two seasons ago and an incredible 19.3 last seasons. With Isaiah Livers, Franz Wagner, Mike Smith, and Chaundee Brown leaving, that leaves a lot of points to make up for. Jones’ is more than capable of doing that, but the question of how much he can produce is what matters.

The Big Ten is full of talented guards, and many who can defend. If Jones can’t adapt to this increased level of talent, then Michigan basketball will really need to rely on younger guys to produce like Houstan and Kobe Bufkin, which isn’t always positive.

On paper, the bench looks to be incredibly solid, but very young. They feature three freshmen who could be high impact players if they can adjust to the college level quickly.

Leading the way is Moussa Diabate, who will be a nightmare on the defensive end, thanks to his massive wingspan. He will need to show he can perform on both sides of the floor, but the future first-round pick could form a deadly frontcourt if Coach Howard decides to play him and Dickinson at the same time.

Bufkin and Collins are both likely multiple year players, but that doesn’t mean they can’t be quality players from the jump. Both have solid intangibles, especially Bufkin who can get hot at any moment.

The veterans show little to be desired, with Williams being the returner with the highest minutes at 7.4 per game. He has a chance to make a jump, but will most likely take a back seat to the younger talent.

According to the KenPom 2022 College Basketball Rankings, Michigan sits at #1 in AdjD (points allowed per 100 possesions). Between Jones, Brooks, Houstan, Dickinson, and Diabate, every game will be a nightmare for the opponent. The Big Ten has a ton of talented offensive players like Ron Harper, Kofi Cockburn, and EJ Liddell to name a few, so being able to take them out of the game will be extremely beneficial for this Michigan Basketball team.

The Preseason All-Big Ten is here and we have ✌️ Wolverines on the 10-member squad!

This season has many Michigan basketball fans excited as they keep inching closer and closer to that national title. They will get an early chance to prove themselves in a surprisingly light non-conference schedule highlighted by home games against Seton Hall and San Diego State, and a road game against North Carolina.

After that, they will face the extremely difficult Big Ten conference, who feature five top 25 teams and several others right outside. They start conference play with six straight difficult matchups in Rutgers, Michigan State, Purdue, Illinois, Maryland, and Indiana. If they can go 4-2 or better, then they will be set for the rest of the season. Watch out for Michigan basketball, and don’t be surprised if they’re still playing basketball in April.