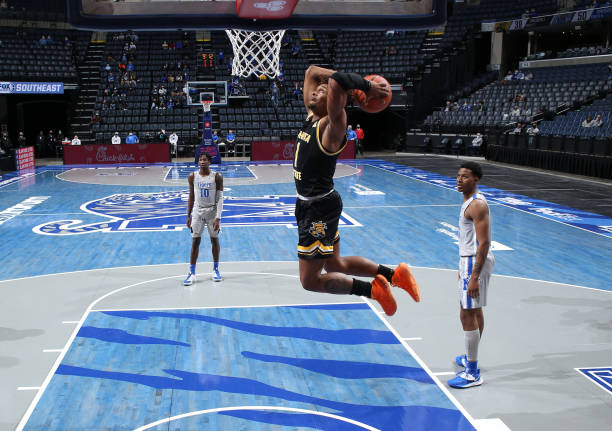 Wichita State basketball had an unfortunate start last year when the team’s head coach, Gregg Marshall, stepped down after allegations of verbal and physical abuse of players and staff. Coach Isaac Brown stepped up and did a great job after an exodus of players the year before.

Coach Brown did lose a couple of players this year. Two were walk-on seniors in Bryce Bush and Jacob Herrs. Two former shocker players are taking advantage of the NCAA exception, Alterique Gilbert is still in the transfer portal, and Trey Wade, who transferred to Arkansas. When Trey transferred, it was not a surprise to see Trevin Wade also transfer away to Eastern Kentucky.

The other four transfers were bigger surprises in Isaiah Poor-Bear Chandler went to Omaha, who couldn’t beat out Morris Udeze and struggled offensively. Josaphat Bilau also struggled to be the offensive force and transferred to New Mexico Junior College.

The significant surprise transfer was Jaden Seymour, who showed real promise in the system but transferred to ETSU. The last player to transfer was Remy Robert, who transferred to McNeese State. A big get for Wichita State basketball, and Coach Brown was Matt McFarland from Colby Community College. He was going to be a vital part of the offense and likely backup to Morris Udeze.

Unfortunately, Shocker Nation lost out on seeing him as he had family issues and transferred to LaSalle. The Shockers brought Qua Grant, a point guard from West Texas A&M, and Joe Pleasant, a forward from Abilene Christian. Wichita State basketball was knocked out in the NCAA tournament by Drake basketball in the play-in round. Shockers want to go back and dance again, Coach Brown has the itch and is ready to wield his dancing shoes. Wichita State basketball finished 16-6 on the year, being 11-2 in conference play.

After testing the NBA waters and potentially being a first-round pick, Tyson Etienne is returning to improve his game and get a higher selection in the first round. Wichita State basketball is getting an influential leader in Etienne who is highly versatile and explodes on stat sheets. He takes a lot of defense, can create shots, knows when to pass, pulls up, and drive the ball. Etienne has a lot of qualities that teams want and is highly advanced at a young age.

He should be the clear Player of the Year in the American with Quentin Grimes going pro and other competitors leaving the conference or going pro. Wichita State basketball finished last year at the top of the conference with some lucky breaks to be the regular-season conference champions. The team missed games against SMU, Memphis, Cincinnati, ECU, Temple, and USF.

Wichita State basketball is excited for the return of the Co-Player of the year in the AAC in Etienne.  Etienne was fifth in points (359) and points per game (16.3) in the conference. He was also ninth in free throw percentage (75.7%), second in 3-point field goal percentage (39.2%), and fifth in field goal attempts (283). Tyson continues his astonishing stats with being tied for third in 3-point field goals made (65) and fourth in attempts (166). Etienne made the fourth in made free throws (84) and sixth in free throw attempts (111).

The stat where he wants to improve even more is turnover over percentage, where he is number 1 in 7.2%, he is seventh in points produced (330) and fourth in points produced per game (15.0).  Tyson Etienne hopes to move up in all of these areas to increase his NBA stock and help Wichita State basketball succeed.

Wichita State basketball lost the only true point guard last year in Alterique Gilbert. He was quite the contributor. However, working on getting better at playing the point, Etienne will likely play most of the point. That’s why Qua Grant could be an essential factor. He is a junior college transfer that brings experience to the team.

Grant is a combo guard, which allows him to be the point or shooting. These attributes will be a massive benefit for the Shockers as he can shoot, ball handle, pass, drive, and kick. Grant will be the one who likely takes the pressure off of the other players when he’s shooting lights out who will open this offense. With the growth of the other guards on the team, Grant could be precisely what the Shockers need.

Wichita State basketball continues to bring in exactly what the team needs, as Coach Brown learned very well from Gregg Marshall on where to find the diamonds that go overlooked. Coach Brown was also blessed with his ability to retain some high-quality players from the Marshall Era. Hoping to build his own, Wichita State basketball is made up of eight guards and five forwards.

In reality, Dennis, Ricky Council, and Ricks can play either guard or forward. Not surprisingly, this team does not have a true big man that it has in the past. With McFarland moving on, this team will be fast, long, and agile. The issue with not having a true big man is the inability to matchup on a central player. Some teams could easily dominate the big man down low, but the rest of the offense will produce and offset that potential weakness.

Wichita State basketball is balanced and gaining an additional year because Covid has a team of five juniors, two sophomores, and six freshmen. The team has the experience and ability to play at various paces, a variety of sets, and it could easily be an issue for teams to match up against.

The Shockers were tenth in the country last season in terms of getting up shots. A few factors contribute to this ranking – not turning the ball over, trusting teammates, and a player like Tyson Etienne. Having Etienne back should help with how many attempts Wichita State is able to get up, but it’s not the end of the world if they drop a little bit.

Wichita State basketball has a decent schedule with a couple of solid opportunities to build an NCAA resume. This team will face Jacksonville State, South Alabama, Tarleton State, Arizona, Missouri, Oklahoma State, Kansas State, Norfolk State, Alcorn State, North Texas, and Prairie View. Having the opportunities to play some serious competitors in Arizona, Missouri, Oklahoma State, and Kansas State could help the Shockers. Wichita State basketball joined the Roman Main Event facing off against Arizona and could have a shot to play Michigan or UNLV in the championship or third-place game in Las Vegas.

With the strength of the AAC, Wichita State basketball should be in the top five of the conference. This team will hope for another 20 win season. If this team can mesh and Coach Brown can figure out a way, this team could again end the season as regular-season champions. The biggest asset for the Shockers will be Shocker Nation and the support of its fans in home games. Having them back in the roundhouse, the fans could break another record with their attendance during TBT. These fans are ready to welcome these new players and build them up.