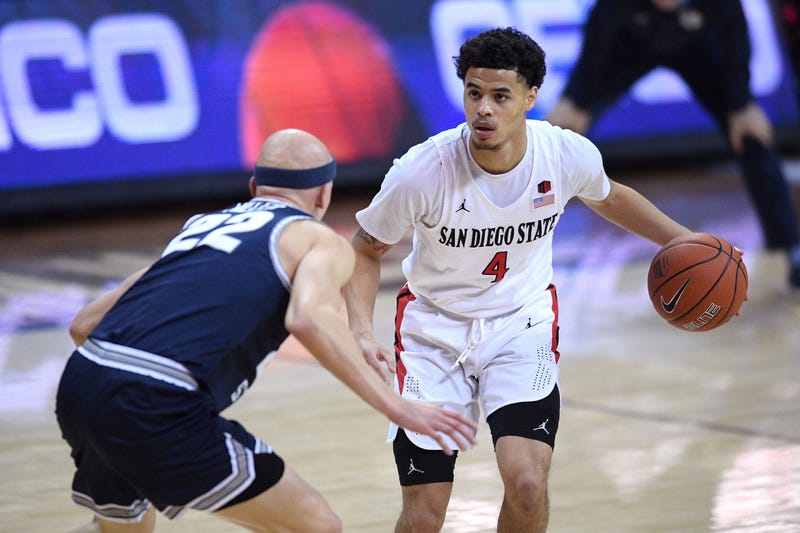 After a crazy year, the NCAA allowed seniors another year of eligibility, and Trey Pulliam and Joshua Tomaic returned to San Diego State basketball. The Aztecs lost Matt Mitchell, who played in the summer league for the San Antonio Spurs before signing a contract in France. This team also lost Jordan Schakel, who signed an Exhibit 10 contract with the Washington Wizards, to a pro contract. Finally, the Aztecs lost Terrell Gomez as well, which means that only two players from the starting lineup for San Diego State basketball return.

Coach Brian Dutcher was able to land some very good help in Matt Bradley from California, Tahirou Diabate from Portland, Chad Baker from Duquesne, and Jaedon Ledee from TCU.

San Diego State basketball finished first in the Mountain West Conference with an overall record of 23-5 in the regular season and 14-3 in conference play. The Aztecs won the regular-season championship and conference tournament championship, earning an automatic bid to the NCAA Tournament. They had a rough loss to Syracuse, who lost to Houston in the Sweet 16. Houston lost to Baylor in the Final Four as Baylor went on to cut down the nets in April.

After finishing dead last with California last year in the Pac-12, Matt Bradley was named to the Pac-12 second team. San Diego State basketball landed him after he finished in the top ten in the conference in many of the offensive categories. In a much more difficult conference, his success made him stand out. Coach Dutcher knew what he might lose in his senior players, so he landed some vital helpers with Bradley being one of them.

The Aztecs are hoping for an All-Conference first-teamer, and Bradley looks to be just that. He will challenge Grant Sherfield in this conference as one of the top overall players. Bradley’s size, strength, and speed will be challenging to stop in the MWC.

San Diego State basketball’s leading distributor from last year is Trey Pulliam. He will need to remain on this tear to assist this team into victory. Pulliam has the best grasp of the offense while being fourth in scoring for the Aztecs per game. He will be the one to run this team and will need to create shots to allow for a more freed Bradley and find other teammates cutting or kicking it out for open shots.

Pulliam will be the heartbeat of this team, as many will look to him to be a leader. Pulliam has the best opportunity of being the actual point guard and will need to help develop new players to the offense, from freshmen to transfers. Coach Dutcher has a plan for him and this team. Learning from coach Steve Fisher, Brian has put the same style into his coaching and this team. Aztec basketball is a tradition and this year, plans to dance deep into the NCAA tournament. Pulliam’s guard play would be one key reason why.

San Diego State basketball only has ten guards, with one player a true point guard in Trey Pulliam. There are nine guards on the roster, nine forwards on the team, and one center that likely ends up playing more as a forward in this conference.

This team is relatively young and can, in the upcoming years, fight for a deep NCAA Tournament run. As an often slept-on team, San Diego State basketball has a culture and a proud one at that.

Coach Dutcher brought in some underrated players that could end up in the starting rotation and will be dependent on how successful, quickly, and beneficial each player contributes to the team.

The Aztecs never shy away from the defensive side of things. Last season, they placed 21st in this KenPom analytic, but that wasn’t new territory. In 2020, the Aztecs ranked 10th in adjusted defense.

This season, Pulliam, Baker, Mensah and Diabate are the key cogs that will run the Aztec defense. They all pay attention to detail on that side of the ball and in the Mountain West Conference will be stifling to go against.

Outside of these games, San Diego State will also play in the Paycom Wooden Legacy, where they draw Georgetown and either play USC or Saint Joseph’s in the following round. A solid non-conference resume will help if the Aztecs do not win the conference or conference championship outright.

With the Mountain West having some intense competition, the San Diego State basketball team will be trying to stand out in the conference yet again.