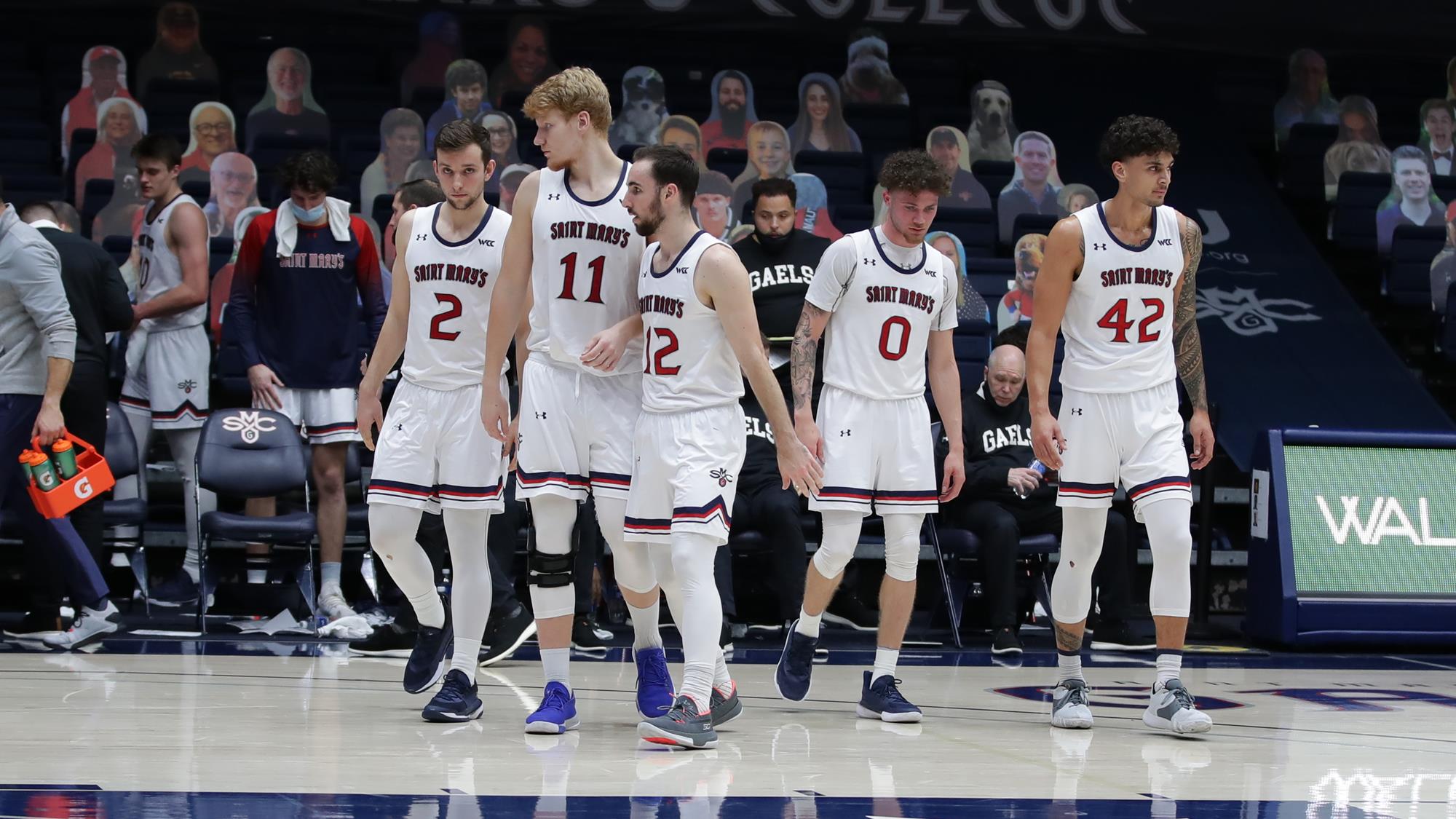 13 returning players are the most in college hoops as Saint Mary’s basketball looks to use that experience to head back to the NCAA Tournament.

Unheard of things were bound to happen when the NCAA announced a ‘COVID year’, giving all student-athletes another season in college athletics. For Saint Mary’s basketball, it was more of a gift. As plenty of players took it as a chance to transfer to a new school in hopes of a renewed chance, the Gaels were blessed with a baker’s dozen- 13 players – all deciding to run it back in Moraga, California.

Last season, it was barely the same. Saint Mary’s basketball started the 2020 season with six freshmen and head coach Randy Bennett says that had an effect on how the Gaels’ season started.

“It just took us a while doing to get every drill you do, teaching them how we practice,” said Bennett.

This year, you can practically throw all of that out the window. The Gaels will welcome in two freshmen, but the commodore of the overall unit will be able to help them adjust to the college basketball game as quickly as any team might see.

“These two young freshmen guards are, everything’s new to them right now. From where they’re at now, to where they’ll be in January, they’ll make the biggest growth,” Bennett said.

Both freshmen are guards. Augustus Marciulionis comes all the way from Lithuania and Chris Howell chose to make the move from Southern California and San Diego to the Bay Area. Coach Bennett believes they’ll be able to crack the rotation at some point.

However, there will be competition for the guard position, especially for the starting point guard and starting shooting guard roles. Those will not be up for grabs as two seniors, Tommy Kuhse and Logan Johnson, formed one of the best backcourts in the West Coast Conference last season.

Both scored the ball well, but Kuhse was also the top assist man for Saint Mary’s basketball. Johnson helped in that category as well, often keeping opposing teams guessing as the Gaels had the added benefit of two starters with point guard instincts. Defensively, Kuhse and Johnson combined for 2.5 steals per game, never taking a play off.

Bennett believes both can elevate their games even more, and in one department in particular.

Despite both averaging over 12 points per game in 2020-21, the two veterans had their struggles from the field. From a basic analytic standpoint, Kuhse was just 40.7% from the field and 27.5% from three. Johnson was more accurate from two, as he made 54.2% from his attempts from inside the arc, but was dismal from outside, posting a 23.2% clip from downtown.

The struggles from deep carried over to the rest of the guys. As a team, the Gaels would only connect on 28.59% from shots from behind the arc. That was good for the bottom 15 in the entire country. However, despite those struggles, coach Bennett believes the statistics were a bit skewed based on how the overall season actually went.

“We were rolling along. We’re 8-1, we were pretty good and we lost (Alex) Ducas and Leemt Böckler, who are our two best shooters, and probably two best scores just as far as being able to make a bucket,” said Bennett.

Before the injury bug bit them, Saint Mary’s was shooting 34.4% from behind the three-point line. However, losing Ducas and Böckler had a clear impact on the Gaels’ struggles shooting the ball the rest of the season. Coach Bennett elaborated about their injuries, saying it will be a whole different Saint Mary’s basketball team with them on the floor.

“We need those guys. I think we have them back this year and if their health is good, I like our team,” Bennett said.

A healthy Ducas and Böckler combined with Kuhse and Johnson only leave six open spots available. Bennett seemed adamant about the two freshmen showing reasons they should be included in the everyday rotation. Judah Brown, Dan Fotu, Matthias Tass and Kyle Bowen also seem like pretty good bets as far as guys who shouldn’t have to worry about playing time.

“10,” said Bennett, when I asked him how deep the rotation will be. “And then probably it’ll get slimmed down to nine as we hit league play, but 10 early. I think we have at least 10 good players that are good enough to play on a top 25 team.”

Gaels advance to the semifinals of the WCC Tourney with a great defensive effort and another outstanding offensive performance by Logan Johnson. Johnson scored 25 points in the victory. #GaelsRise pic.twitter.com/GqIvv8VZUQ

The Gaels have just under 50 days to figure it out, but Bennett is sure that once he does have his 10, they’ll be pretty hard to stop.

“We were toward the top last year,” said Bennett, whose Gaels were 60th in the final NET rankings. “I like our pieces. If we’re healthy and our guys are back, we have a lot of pretty good players.”