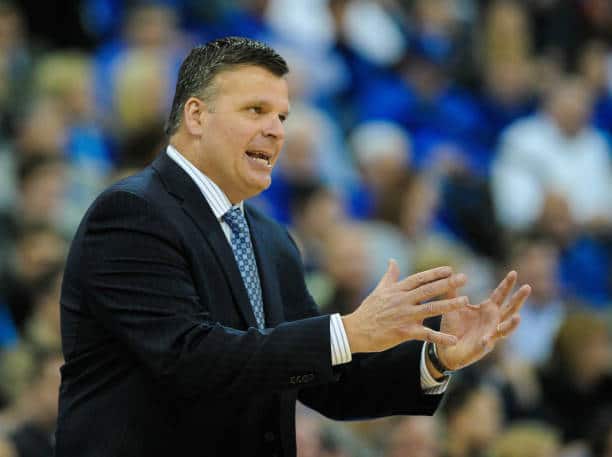 A top-ten recruiting class takes over a Creighton basketball team that lost nearly everyone from last season.

After a year that Creighton basketball should be proud of, the team finished second in the Big East because the Bluejays played more games than anyone else. The Bluejays overall record was 22-9 on the season and 14-6 in conference play.

Head coach Greg McDermott lost most of his players to pro contracts either here or abroad, with others departing to different teams in the transfer portal. McDermott was able to get a couple of transfers in Keyshawn Feazell and Ryan Hawkins. These two will likely be slotted into leading roles, with Alex O’Connell as the senior on the team. Multiple freshmen will make Creighton even more intriguing.

Stumbled across this McNeese-Nicholls game on YouTube and found a few clips to share of new Creighton commit KeyShawn Feazell (#2) pic.twitter.com/5zDVBFg9Kd

KeyShawn Feazell is joining Creighton basketball and Coach McDermott after stints at McNeese State and Mississippi State. He had excellent play when given the opportunity not awarded to him at Mississippi State and dominated. Feazell will need to step up big for this team and be a leader. With his experience in different systems and competition, his length and size will be a tremendous asset for this Bluejays team.

He has a hunger that Coach McDermott will appreciate as he led the Southland conference in rebounds. Feazell is very bouncy and will likely be the guy going for the ball, blocking shots, and stealing rebounds for Creighton basketball. He is a shooter but isn’t known for his 3-pointers. He has a soft touch, the ability to cut, and can throw it down.

Creighton's Ryan Nembhard is showing off his game today for Canada.

Ryan Nembhard is stepping into some big shoes trying to follow his brother at Gonzaga and also after Marcus Zegarowski for Creighton basketball. Coming in as a top prospect, Nembhard will likely have many expectations from analysts, fans, and coaches. McDermott will hope that he can mold Nembhard into something unique and another coach on the floor. Nembhard has some solid stats, but that was in high school. He will need to grow up quickly to fly as a Bluejay. Creighton has a lot invested in him, and I am sure he will continue to rise.

Creighton basketball has a very talented group of starters. However, the team lost players this off-season to various places and lost a lot of depth. The Bluejays consist of 11 guards and four forwards. Four of these guards went to play pro ball, one forward went overseas to play professionally, which tanks the depth. The players not in rotation had very little to no stats in their time with Creighton basketball.

Kaluma, Miller, and O’Connell will carry most of the load off the bench, which isn’t necessarily bad, but is putting trust in two freshmen and a senior who’s a good three-point shooter at best.

This team has Sami Osmani, Andrew Merfeld, Devin Davis, John Christofilis, Rati Andronikashvili, and Modestas Kancleris. Zander is a walk-on, Christofilis is a 3-star recruit, then unranked Andronikashvili and Kancleris. The other players are returners who could not average over 1.0 in any statistical category.  Creighton basketball will hope that its starters will carry the load.

I’m cheating by not using actual analytics, but how often is Creighton a top ten recruiting team? (7th to be exact) The Bluejays even topped Villanova, and that’s no surprise considering four of their recruits are rated 4-stars and inside the top-75.

Kaluma is the highest-rated and might be on the bench to start the season, but expect him to fight for the starting power forward job with Feazell. Nembhard and Alexander probably will be starters from day one, forcing McDermott to rely on his fresh faces.

Either way, it’s totally off-brand for Creighton to have this great of a freshmen class, but you have to see it as a positive. Better players usually mean good basketball teams.

This is a very young team, but given all of the talented freshmen, it could be a sleeper team to watch. Creighton is usually a team that excels with juniors and seniors, so it will be interesting to see how McDermott coaches the young bunch.

Even with that inexperience, this is a team with NCAA Tournament hopes. Matty Brackets didn’t have them in the field in August, but they’re right around the corner from being able to get in as an automatic bid. It’ll be up to the Bluejays to fight for some good non-conference wins and hold their own in the Big East. They have a lot of preseason expectations, but those don’t always hold true.