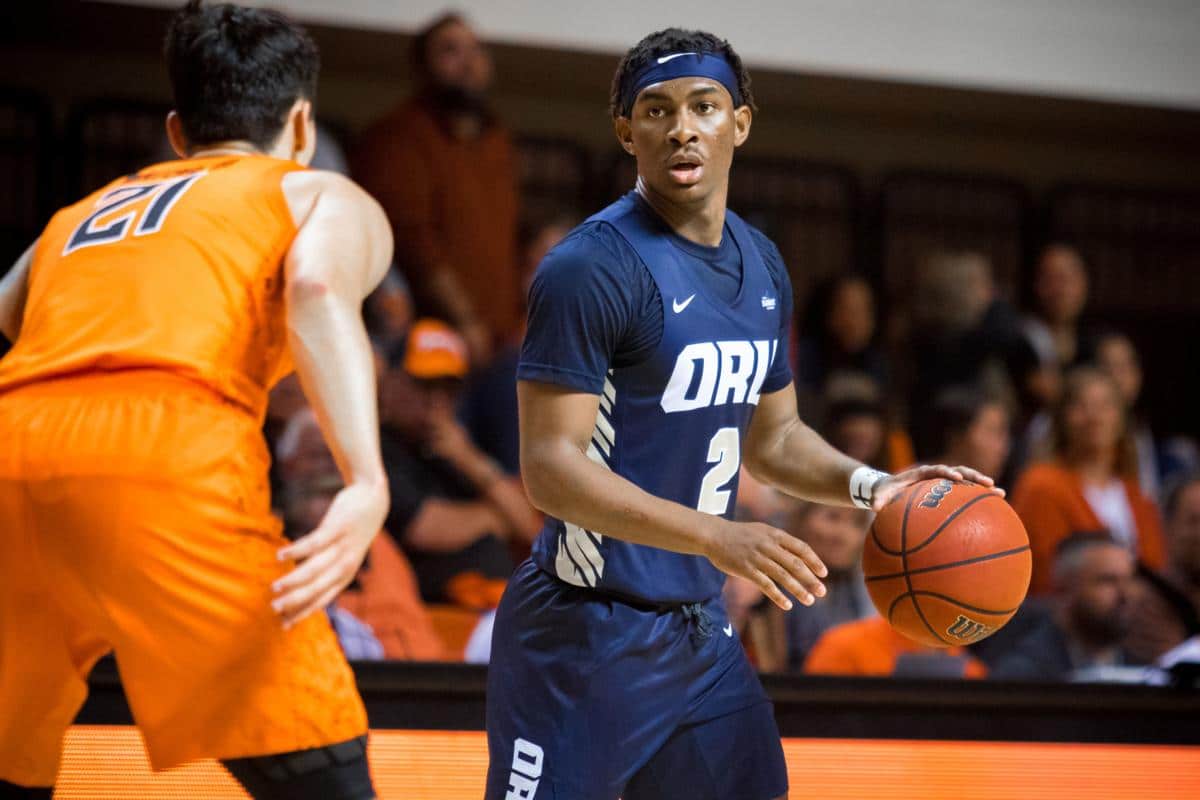 After testing the NBA waters, Max Abmas returns to Oral Roberts basketball missing his partner in crime, Kevin Obanor, who transferred to Texas Tech. This team remains mostly the same but does lose a few other pieces. This Golden Eagle team will have some transitioning to do as it also loses RJ Glasper to Incarnate Word, Sheldon Stevens to Emporia State, and D’Muria Jones to Cal State Dominguez Hills. Head coach Paul Mills was able to recruit Isaac McBride from Vanderbilt and Trey Phipps from Oklahoma.

The Golden Eagles finished fourth in the Summit Conference with the most games played and most wins. They finished 18-11 on the season and 10-5 in conference play. Oral Roberts ended the season in the NCAA tournament claiming the 15th seed to beat Ohio State (2), Florida (7) before a sweet 16 loss to Arkansas by two. Arkansas went on to lose to Baylor in the Elite Eight.

Few of our fave 🏀 plays from your 2021 Summit League Champions!!!
And tune in tomorrow (CBS/2 pm) to watch these Champions in action as they take on No. 2 seed Ohio State | Round 1 of the NCAA Tournament #MarchMadness pic.twitter.com/y9GzDzsSSI

Max Abmas gave us a SHOW 🤝

Showed us why he is the LEADING SCORER in the nation 💯

Max Abmas has something to prove after a poor showing in his NBA draft process. Oral Roberts basketball is going to lean on him, and he will be Abmas to grow. Adding some additional tape, Max will hope to strengthen his NBA resume and think after a summer of work. He will come out very strong. Max Abmas will work on creating shots, increase his basketball IQ, and hopes to be able to not only draw defenders but also get past them or pass out of many difficult situations. Abmas’ scoring prowess is a huge benefit for this team. He was at the top of the Summit league in almost every facet.

He was surprisingly only sixth in field goal percentage. He needs to improve on floor vision, having the second-most turnovers in the league and third in turnover percentage, and becoming a better defensive player. If he can get a little heavier and more muscular, his footwork to keep players in front of him, Abmas could quickly become a player in similar stature to Fred VanVleet, Stephen Curry, or Trae Young as examples of players he could form his game to match.

Freshman year was a good one✅🏀 pic.twitter.com/x13aGcqB6M

With Kevin Obanor to Texas Tech, Kareem Thompson will gain more playing time and have to try and fill his shoes. Thompson is a well-rounded player, but he needs to become more reliable. He will need to be able to take the big men outside and knock down 3-pointers. Oral Roberts basketball will need Thompson to crash the boards with the loss of Obanor on both ends of the floor, going strong to the basket for additional points, blocks, and be a massive outlet for Abmas. His length is a considerable asset, and he hopes he can maintain it for Coach Mills.

Oral Roberts Basketball doesn’t have many turnovers, but its depth is acceptable and not stocked with a ton of 3, 4, or 5-star recruits. Expecting Abmas to lead the Summit league in minutes played again wouldn’t be a surprise unless there is an injury. Losing Obanor and Glasper is an issue for this team, but luckily there are players to replace them that have the talent to step easily into their shoes.

Once we get past these top 8 players, there is a drop-off. This Oral Roberts basketball team contains eight guards, six forwards, and one of those forwards could also play center, making it two five-men. Pretty balanced here, but the Golden Eagles added three newcomers (two of which are forwards and one guard).

Oral Roberts basketball only has two players back that averaged scoring over eight points per game last year. The rest were hit or miss. Probably one of the biggest struggles for the Golden Eagles will be its lack of solid shooters. This bench will need to step up for this team to have success in the postseason.

The Golden Eagles were 46th in adjusted tempo last season, which measures possessions per 40 minutes. With Obanor gone, that likely will take a hit as the Golden Eagles will need to find a replacement for such a valuable offensive asset. However, Abmas is the ringleader, and he will keep Oral Roberts in a good place as far as earning extra possessions throughout the course of the game.

How will he do that? Not turning the ball over. Obanor hit the offensive glass to create extra shots for Oral Roberts, so Abmas will need to do his share by limiting turnovers. He only turned it over 2.3 times last season, so that’s a wonderful start.

While Oral Roberts basketball made it to the NCAA tournament and hopes to return, after a brutal ending to last season not becoming the regular-season champions for the Golden Eagles, the team had to win the conference tournament to advance. This team could easily do it again behind Max Abmas.

Oral Roberts has set up excellent non-conference opponents in Colorado, Oklahoma, Tulsa and TCU, among others. With experience in the starting lineup, this team is balanced and could mesh and move forward into a strong run for the end of the season.

Projected Finish: 1st in the Summit