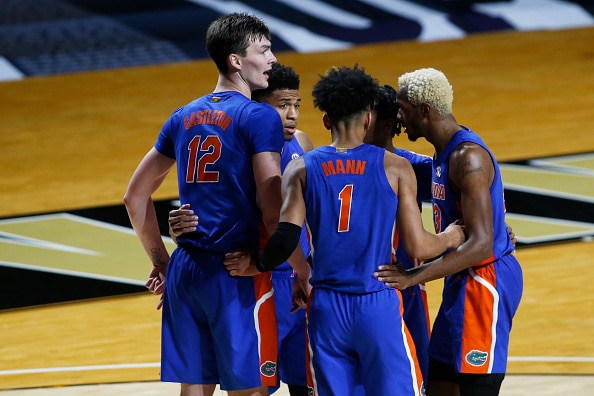 The return of key starters, plus an incredible group of transfers will see Florida basketball back in the mix for the top team in the SEC.

Last season, Florida basketball put together an impressive run and found themselves in the Round of 32 before being upset by Oral Roberts. This year, they lose some of their top guys but return several important pieces and some essential recruits in their attempt to make it back to the Round of 32 and further.

Castleton might not be the top scorer in most games, but his value on the court is so important. He’s a terrific rebounder and defender and makes the right play more times than not. In the Round of 64 game against Virginia Tech, he was the main reason why Florida was able to win that game. With an expanded role now that guys like Tre Mann and Noah Locke are gone, we are going to be able to see this even more.

Castleton is a classic example of making the most out of his minutes. In his sophomore year, he only averaged 8 minutes a game and because of that wasn’t productive. Last year, that was boosted to 26 minutes per game and we saw what happened with that. Expect Castleton’s production to continue to rise, especially in those SEC conference games when the lights are on him.

The Penn State transfer really showed that he is one of the best players in all of college basketball last season. He averaged over 15 points per game in arguably the toughest conference last year and did so on decent shooting splits. Now, in a new system, conference, and role, Florida basketball is hoping Jones can continue to do what he has done the last two seasons, and even get better.

If Jones can be a 15+ point per game scorer for Florida, then this team will be super dangerous. However, if he struggles with issues like chemistry or Florida’s system, then that can be a cause for concern and would lead to guys like Appleby or Fleming to step and ruin the rotation ladder.

Florida basketball actually has a really deep 8 man rotation, and if Keyontae Johnson is able to play, it could be one of the best in college basketball and a surefire 10/10. Brandon McKissic was terrific last year at Kansas City, and he could be a great guy to call off the bench when they need a bucket.

Duruji is another great player, who not only is a leader on the court but does the nitty-gritty stuff that every team wants. Don’t be surprised if he replaces C.J Felder in the starting lineup. Rounding out that 8 man core is Kowacie Reeves, who’s a Top 10 shooting guard recruit in the country and can make an impact if given the right situation.

Every team that finished in the Top 45 in both AdjO and AdjD made the tournament last season. Florida was one of them, finishing in 44th and 41st. These stand for Adjusted offensive and defensive efficiency in KenPom, meaning Florida basketball was getting it done on both sides of the floor. Now, with a very new team, Coach White will have to make sure that they can stay solid on both ends of the floor and make it back to the NCAA Tournament.

If you came into this upcoming season thinking you’d see the same team, you’d be very mistaken, with four of the top six rotation players being transfers. Like any team with a lot of new players, chemistry can play an impact at the beginning of the season.

Something to watch is how players will adjust to different roles, especially the transfers. Jones, McKissic, and Fleming were all top options at their previous schools, so now that they’re all on the same team it’ll be interesting to see who takes the step back and who still keeps that role.

Florida takes on a few fun non-conference opponents this season. The two to watch are against in-state rival Florida State on November 14th, and a home game against a probable top 25 team in Maryland on December 12th.

After that, it goes to conference games, where the SEC should be as tough as ever. Florida basketball will have a three-game stretch at the beginning of conference play against Alabama, Auburn, and LSU to test how legit of a team they can be. Also keep an eye out for the regular-season conference finale against Kentucky, which can have conference and NCAA implications for both teams.

Projected Finish: 7th in the SEC