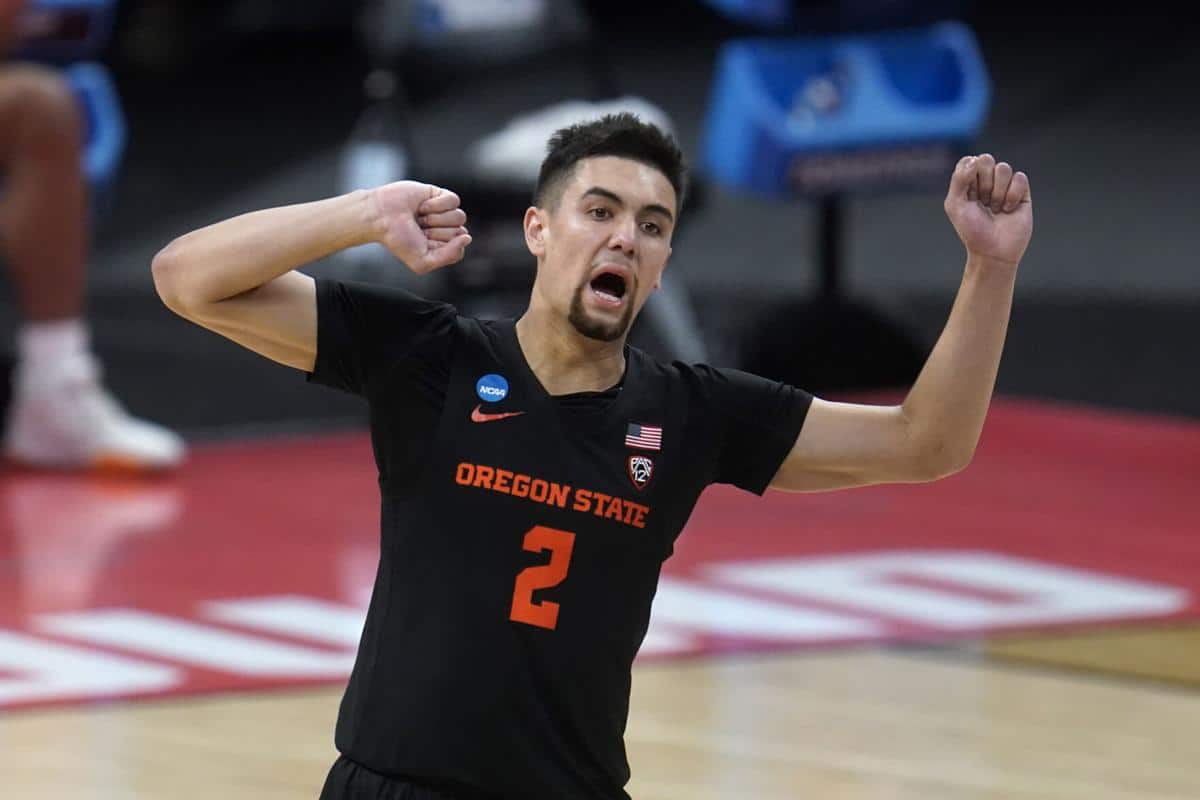 Oregon State basketball has one of the tallest teams in college basketball. The Beavers will look to use that size to compete in an improving Pac-12.

Ethan Thompson’s time with Oregon State basketball has come to an end, shifting junior Jarod Lucas into the role of the go-to guy on offense. Six of the Beavers’ top eight scorers from a season ago are back, so the team chemistry should be off the charts. A few impact transfers should keep Oregon State in a serious quest of another 20-plus win season.

Lucas is a shifty guard, who dribbles to his spots, and really excels in the mid-range game both as a shooter and a passer. He’ll likely split time with Hunt at point guard because the numbers Hunt put up last season are too hard to ignore.

Either way, Lucas will have to move from Ethan Thompson’s sidekick to the leader of Oregon State basketball every night. That type of adjustment can be difficult, but Lucas has shown flashes of being able to do so.

Lucas will destroy teams from outside, where he nearly shot 40% from deep last season, shooting six times from deep per game. His defense is nothing to brag about, but his ability to lead an offense and make nifty plays shines through. This season, it’ll just be about having higher averages as a means to pick up what will be lost with no Thompson.

Hunt started one game last season, coming off the bench for the other 30 as the sixth man. He averaged nearly three assists in 20 minutes per game, making a really good case to be the starting point guard for Oregon State basketball this season.

It will all depend on if Wayne Tinkle wants Lucas to play off the ball or be the main distributor. I prefer Lucas at the two, which would likely mean Hunt would start at point guard.

If Hunt can make another leap forward from his sophomore to junior season, it would give the Beavers some pretty good depth at guard, where they might even run three in a starting lineup with two beefy big men. Hunt will have options to lead a successful offense, but like Lucas, it will be about adjusting to a new and more important role.

There isn’t a surefire sixth man on Oregon State to start the season, but I realize that could change as it goes on. However, there are a couple of players who have the potential to really help this team out as the season drags along.

The most impressive feature of the Beavers’ bench is how practically every position has a replacement player. 6-foot-8 Rodrigue Andela and 7-foot-2 Chol Marial are the main reasons for that arsenal at Tinkle’s disposal. It also gives the Beavers an inside track to be one of the best rebounding teams in the Pac-12.

I’m also keeping an eye on Isaiah Johnson. He played off and on last season, but has the body type to be a potentially lethal player if his game allows.

The Beavers shot the three at 37.15% as a team last season. Obviously, the departure of Thompson will shake that up a bit, but Williams and Malone-Key are two transfers that can come in and knock down threes.

Oregon State basketball really excels when Hunt and Lucas are firing away from deep. They can both connect around 40% this season and that alone would give the Beavers an extra way of beating teams.

Oregon State basketball is a sleeper team because they no longer have their star in Thompson, but are really a veteran team with a few could reinforcements from the transfer portal.

I can see the Beavers struggling from time to time as they try and get past the Thompson era, but I don’t think it will be more than a few weeks process. They’ve got a lot of players back from last season, and that’s always a nice quality to have.

I’d be foolish to say this team can challenge Oregon and UCLA for a Pac-12 title, but there’s no reason they can’t finish in the top half of the conference and earn a bid to the NCAA Tournament. The Beavers will be able to score the ball, outrebound opponents, and play efficient basketball when Hunt and Lucas are on the court.

I’m projecting the Beavers to be right on the brink of the tournament on Selection Sunday, but they’re certainly a team that can win a game if they get in. Keep an eye on the Beavers and don’t count them out as they move past Thompson.