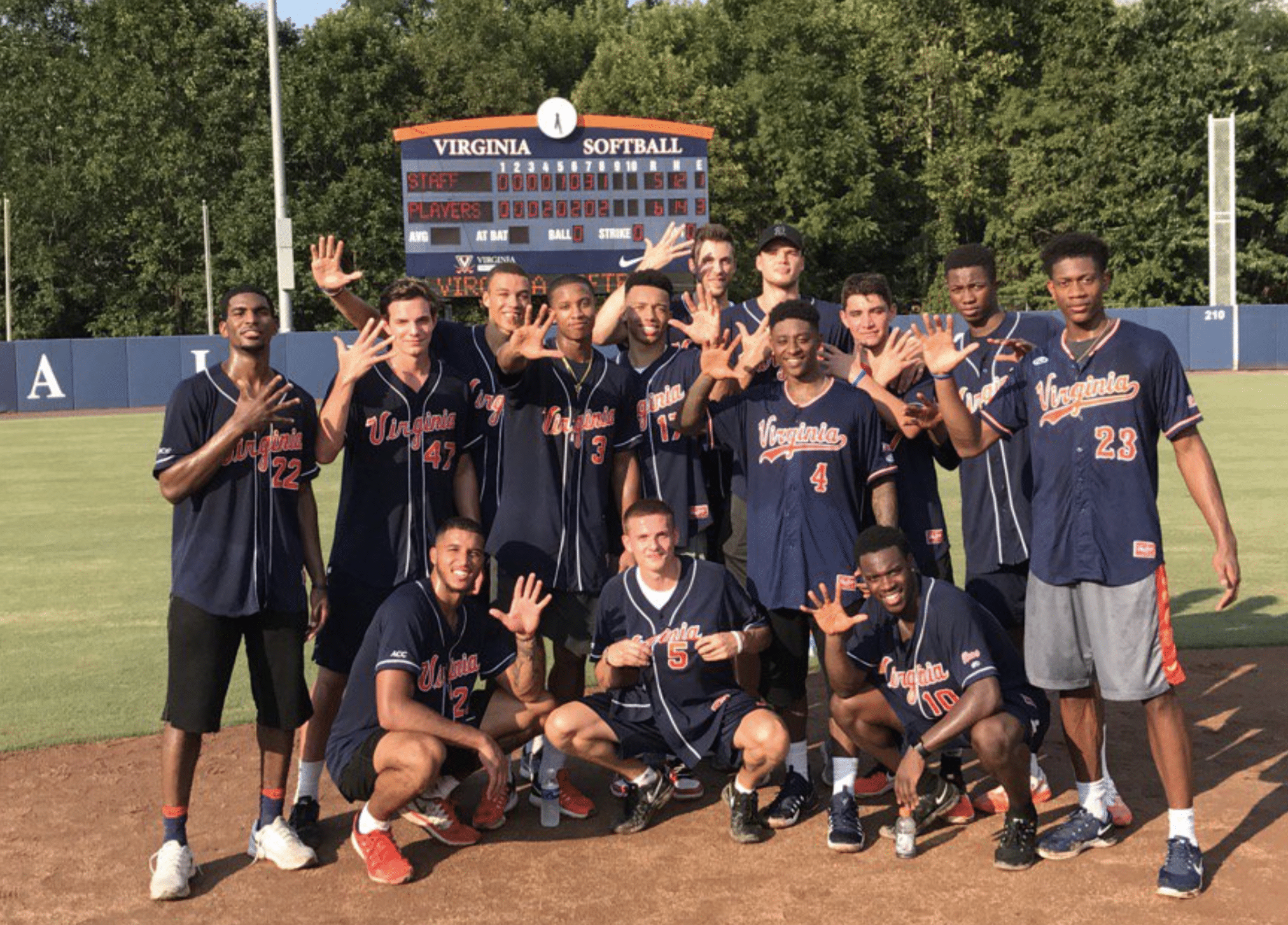 College Baseball is about to crown a National Champion in Omaha at the College World Series.

Unlike the sport college basketball, where four teams emerge to determine a title team at The Final Four in three days, college baseball has eight teams converging in Omaha, Nebraska.

Two will meet in the finals, which is a best-of-three series, and whoever comes out on top hoists the trophy and claims the final national title of the 2020-2021 college sports year.

But as a college basketball news outlet, we wanted to take a look at the tournament as if it were basketball. So we went through the bracket, making it a single elimination tournament, similar to what we see in March, and judged who would come out on top if it were hoops and each schools basketball team was playing.

Do you agree with how this would play out? Vote on Twitter who you think got their picks right!

The college baseball postseason starts with 64 teams seeded into 16, four-team double elimination brackets. Those 16 teams then are put in head to head matchups in a best of three series to advance to college baseball’s greatest event, the College World Series.

The College World Series teams feature these eight schools and here are the matchups set to start this weekend.

In honor of Creighton, whose campus is in Omaha, we have named the two brackets, the Doug McDermott Bracket, and the Paul Silas Bracket.

NC State finished the season with a 14-13 record (9-8 ACC) and was selected to play in the NIT, where the Wolfpack beat Davidson and fell to Colorado State. They had a pair of quality wins over UNC at home 79-76 and at Virginia late in the season 68-61.

Their opponent, Stanford, lost in the first round of the Pac-12 tournament and did not play another post-season game. Forced to be road warriors in the Covid-19 crazy season due to strict California mandates, the Cardinal swept Arizona, ironically a fellow College World Series participant. However, their best win came in the season opener when they throttled what would become an Elite 8 team in Alabama 82-64 on November 30 in Asheville, NC.

Steve’s Pick: Based on the quality win over Alabama and the talented duo of Oscar Da Silva and Zaire Williams, I am moving Stanford on to the McDermott Bracket Final.

Sam’s Pick: Although Stanford had a huge win over Alabama, the Wolfpack had a better end of their season and had the momentum over Stanford in the postseason. For that reason, NC State will be advancing to my McDermott Bracket Final.

In the other matchup, it’s Vanderbilt against Arizona. First, can you imagine the coaching job Sean Miller would have had to do to get his Wildcat team to the Final Four?

The Wildcats finished 17-9 with their best win over USC. They did not play in the Pac-12 tournament. Meanwhile, Vandy was 9-16 overall, but did win its first-round SEC Tournament game. All logic says Arizona moves on. “Not so fast” as ESPN’s Lee Corso would say!

Steve’s Pick: Vanderbilt would have the best player on the floor in Scottie Pippin, Jr. They might have the second-best too in talented double double machine Dylan Disu. The Commodores played LSU, Tennessee, and Alabama well late in the season (albeit in three losses). Add in that Arizona sharpshooter Jemerl Baker had been lost with a season-ending injury, and the Commodores ride the three-point shooting of Pippin, Jr. to a surprising win.

Sam’s Pick: Arizona would have made a crazy run if they made it this far. They beat Arizona twice, with no other great wins coming. As aforementioned, Vanderbilt is loaded with talent, but what gives the Commodores the advantage here is how unlikely it is that Sean Miller fields a Final Four team. Vanderbilt to the McDermott Final.

That sets up an intriguing matchup between Vanderbilt and Stanford in the McDermott bracket final. Two of the best academic institutions in the land. One plays for a national title.

When you examine this matchup, Stanford struggled defensively and allowed their opponents eight made three-pointers per game. That plays right into the hands of Vanderbilt, who made nine per game. Pippin has another big game and the SEC sends one of its teams into the finals. Vanderbilt wins!

This game would be very sloppy and very face paced. Turnovers galore, and not the typical Final Four game. However, NC State had a knack for winning poorly played games this season. They usually win their biggest matchups by forcing them to play sloppily. With that, NC State moves on to the National Championship.

This is the heavyweight bracket as Virginia is looking to repeat having won the last title in 2019 before Covid-19 canceled the 2020 event. Tennessee and Texas not only share the color orange, but also Rick Barnes as its head coach. Then, there’s upstart Mississippi State from the SEC looking to spoil the fun.

In the opener, it pits the two best teams in the field against each other in the first game. That’s the way the bracket fell. There’s no re-seeding, remember!

Steve’s Pick: Tennessee proves to be too tough for Virginia, which is saying something against a Tony Bennett squad. The Vols, who had wins over Kansas, Arkansas, Missouri, and Florida to close out the regular season and then again in the opening round of the SEC Tournament, outscore Virginia to stay alive.

Sam’s Pick: Virginia had an extremely up and down season, winning some very big games and losing a lot more. Still, they had some incredible offensive performances and played solid defense as the season went on. Virginia’s weakness was the three-point shot, more specifically, defending it. And Tennessee shot 33% from beyond the arc. Virginia squeaks past the Vols.

Texas had a great season under Shaka Smart, going 19-8 and finishing third in the Big 12. Andrew Jones and Matt Coleman III led the Longhorns in scoring, but it was a very evenly balanced scoring attack, with six players averaging over 8.5 PPG.

On the other side, Mississippi State had a very rough season, finishing just 8-10 in the SEC and winning only one game against a Top-25 opponent.

Steve’s Pick: Knowing they would face their former coach was all the motivation they would need as the Longhorns throttle the Bulldogs Iverson Molinar and DJ Stewart. Greg Brown dominates in the paint and Texas moves on to face Tennessee.

Sam’s Pick: Texas had every advantage in this game. Guard play, defense, shooting, rebounding, you name it. This game would not be close. Texas to the Silas finals.

The Longhorns exhausted all their energy in beating Mississippi State and had nothing left in the tank against Tennessee. The Longhorns’ pension for turning the ball over at 14 times per game proved fatal against a ball-hawking Volunteer defense that forced over 15 turnovers per game. That led to a huge fast-break advantage for Rick Barnes’ squad. John Fulkerson did his best to contain Brown in the paint as that matchup was basically even and Barnes’ current squad beat his old squad, setting up an epic final.

Texas and Virginia do have something in common, as the two Coleman sons are on each team, Matt on Texas and Chase on Virginia. With that being said, Texas is the highest ranked team in this field from a basketball standpoint for a reason. They shoot the ball well, play smothering defense, and would be too much for Tony Bennett’s team. In a different year, maybe Virginia takes it. But the defense was not quite good enough to keep the Cavaliers in games that they shot poorly. For that reason, Texas moves on to the title game.

Two SEC teams. Two from the state of Tennessee. It’s Vanderbilt and Tennessee in the Championship Series. Since college baseball plays a best two of three to crown its national champion, so will we for this exercise.

On the basketball hardwood, all you need to do is look at the two regular-season matchups to see who wins this series. Tennessee swept Vanderbilt 81-61 and 70-58. Neither game was that close! Pippin, Jr. does his best and makes a case for MOP from a losing team but the Volunteers finish the year 4-0 against their in-state SEC rival and claim the title with a sweep.

Rocky Top can be heard playing all across the Volunteer State, even in Nashville, home of country music and the Commodores (the basketball team not the musical group).

In a best of three series, Texas takes this without a question asked. But let’s take a deeper look at what would happen in a one-game series.

DJ Funderburk is a key factor in this game. Can he out rebound the Longhorn big men and provide second chances for his guards? Devon Daniels is a threat, but do not forget about Braxton Beverly, who has been lurking from three-point range, haunting the ACC for years.

NC State would shock Texas with their style of play and ferociousness. And I would have said Texas would stay cool and collected, but they ran into a similar matchup against Abilene Christian, and we know how that went. NC State shocks the world and wins it all.