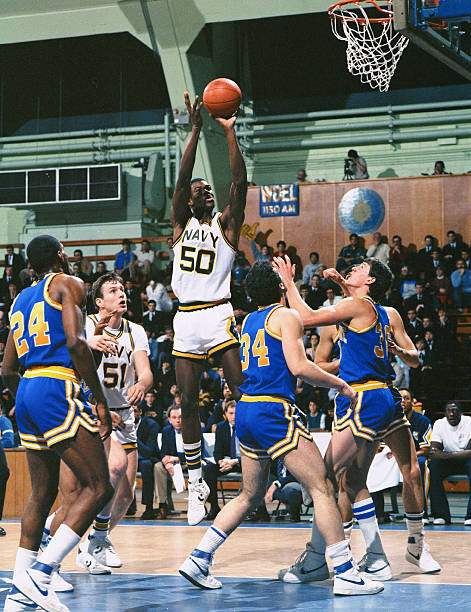 On Memorial Day, we look at the best college basketball players to ever grace the floor for an academy college.

College basketball has always been flooded with talent in the power-six schools. Night in, night out, they put their bodies on the line against the best in the game.

Unfortunately, often underlooked are the students playing division one basketball at service academy schools. Not only are they putting their bodies on the line for a sport, but are also training to do so for the United States of America.

There may have been players that played in the 1970s and 1980s that put up better stats than Brown, but the fact that he has been dominant at The Citadel in an age where mid-major teams very rarely get that type of talent and production is noteworthy.

In four years, Brown has raised his statistics each season. But his senior season, Brown averaged 18.8 points and 10.5 rebounds, being marked as one of the best players in the SoCon in the process. More than that though, he’s showed that players at academy colleges can still get it done at an elite level on the court.

Winton is easily Coach Krzyzewski’s best player during his tenure at Army. After a 3-22 season, Coach K came in and led Army to an 11-14 record, followed by two straight winning seasons.

Winton led the Black Knights in scoring all of those seasons, including 23.0 points and 10.3 rebounds for his fourth and final year in West Point, NY. His jersey was retired along with other Army legends in 2015.

Another Army product, Houston came in a few years after Coach K departed for Duke.

The 1987 MAAC Player of the Year, Houston was a flat-out scorer at just 5-foot-11. He raised his averages from 11.9 points during his freshman year to 32.9 points his senior season. He also developed his passing and rebounding – even from his short stature.

He never played in the NBA, but Houston was easily Army basketball’s most gifted scorer of all time.

Williams is the lone modern-day serviceman to really grace an NBA floor consistently. At VMI, Williams averaged close to 30 points both his junior and senior seasons, becoming one of the most gifted scorers in Big South history.

He was drafted to the NBA in 2009 by the Golden State Warriors and averaged 15.2 points his rookie season. From there, his averages dipped, but Williams was able to stay in the Association as recently as 2017.

David Robinson is hands down the best serviceman to ever touch a college basketball floor. “The Admiral” spent four years at Navy dominating the competition, eventually becoming one of the best NBA players of all time.

Robinson was inducted into the Basketball Hall of Fame in 2009 and is also often listed as one of the 50 greatest players in NBA history.