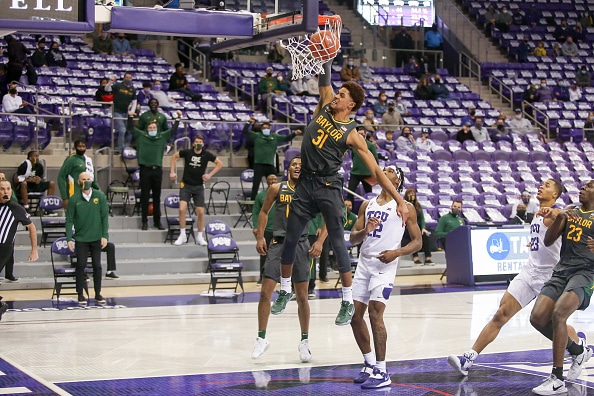 We saw a lot of impressive performances from players throughout college basketball this season, but some stood out from the pack.

From crazy scoring performances to monster all-around games, these are the top individual CBB performances of the 2020-2021 season.

Every part of the statline is normal for Wahab, but the 9 blocks would tie for the most by any player in a single game this season and almost got him a triple-double without assists. This was also his only game with more than 3 blocks, making this stat even more impressive.

Like Wahab, he was just one block away from a triple-double and tied the season lead for blocks per game, but this statline is clearly better. Queta is a beast on the defensive end, and unfortunately, Colorado State had to find that out the hard way in an important conference game.

Jalen Moore did it all in this game, completing an impressive triple-double for Oakland. Moore is no stranger to passing, leading the nation in assists per game last season but bringing down 11 boards and scoring as well gave him the honor of being in the top performers this season.

Ayayi was incredibly efficient in this performance, being able to get a triple-double in just 28 minutes. He shot 71% from the field, and having 14 assists in 28 minutes is extremely impressive, even if you’re on a team like Gonzaga. Even in the NBA, we don’t see people hit the triple-double mark this quickly besides Russell Westbrook, so to do so in college is incredible.

Davis’ 46 points were the most by any player this season. The scorer was on fire from three, making 10 in only 16 shots, and adding 5 assists is also impressive. Davis will go down as one of the most underrated scorers in college basketball, and he’ll have this game as proof.

While his shooting splits are subpar, there are three stats that really show how amazing this game was for Al-Dama. The 30 points and 22 rebounds was one of the three 30-20 performances this season, and the most rebounds grabbed in either of those three. Also, playing 51 minutes in a game is nothing short of astounding. That is 11 minutes over playing every minute of the regulation game, so the fact he was able to continue to produce as the game went on deserves recognition.

Prim was an absolute monster in this game, shooting well and achieving a monumental 20-20 game. He did so in only 34 minutes, meaning he utilized every second he was in the game. The three blocks are a bonus on the defensive end for the underrated big.

What MaCio did in this game might be one of the best heat checks college basketball fans have seen ever. He started the game 10-11 from three, something not even Stephen Curry has done in a game, and with Teague’s untraditional shooting form, each one was more surprising than the other. He also did this in an important conference game in early March, making this performance special and one that could honestly have been ranked higher.

Cade proved to every critic in this game that he is going to be an NBA superstar and the #1 pick in the draft. A forty point double double is a special performance, and to add a few steals and blocks on the defensive end is impressive too. He was lights out from the line and scored at will in this one.