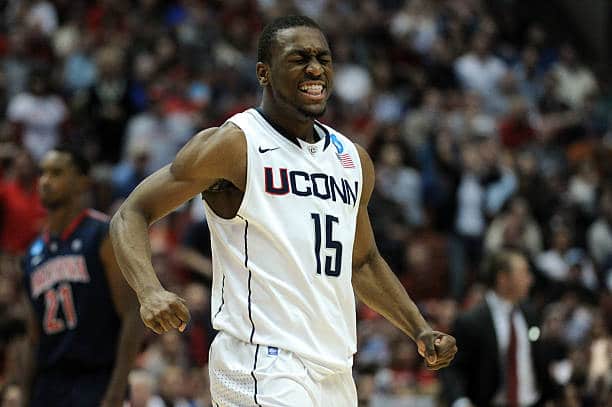 The NBA Playoffs kick off this evening, but who would be the favorites if we went by their college careers?

Tuesday marks the start of a new NBA season as the NBA Playoffs kick into gear. This year, the betting favorites include the Brooklyn Nets, Milwaukee Bucks, and even the Los Angeles Lakers. But we’re a college basketball website, so this year’s playoffs got us thinking – who would be the favorites if we went by each team’s best college stars.

Because of international stars, some of the NBA favorites weren’t included. And then there’s LeBron James who made the jump from high school, which effectively knocks them out too.

To create the list, each team is limited to a starting five and sixth man. So let’s get going!

One through five, the Charlotte Hornets have the most complete roster. Even Miles Bridges off the bench is solid. But other teams above them just have a bit more star power. Gordon Hayward could push them a few rounds, but ultimately the Hornets lack a duo of college superstars to put them over the top.

The Blazers do have a college superstar in Carmelo Anthony along with two Cinderella beasts in the backcourt. Nassir Little, Harry Gilles III, and CJ Elleby can all hold their own, but they bring down the talent a bit too much. Melo was able to lead a Syracuse team similar to that makeup to a championship, but this time he gets beat a round or two short of the Larry O’Brien Trophy.

The Pacers have some HOOPERS at the forward and center spot. Dougie McBuckets can light it up on anyone, and the Sabonis/Turner tandem is one of the best in these NBA Playoffs. Brogdon, LeVert, and Lamb combine for a pretty solid guard trio, but other teams have even better ones.

The Hawks are one of those teams with that firepower at the guard spot. We saw what Trae Young did at Oklahoma, but Kris Dunn did the same on a smaller stage at Providence. Hunter, Reddish, and Fernando are all solid as well, but Huerter doesn’t give them enough boost off the bench. If you’re asking why the Hawks are above some of these other teams, it’s because of one name – Trae.

Now we’re getting into the real contenders. That CP3 and Jevon Carter backcourt is nasty and Mikal Bridges can produce as a small forward. This team really thrives up front as Frank Kaminsky and DeAndre Ayton were two of the best bigs to play in college in the 2010s. Jalen Smith off the bench is another solid addition that could push Phoenix to the Western Conference Finals of these NBA Playoffs.

The Warriors probably make it out of the West. Steph Curry literally got to this point because of what he did in college and Jordan Poole hit one of the best shots in college basketball history. Wiggins, Green, and Paschall make for a tough and versatile frontcourt. Oubre is one of the best sixth men in this simulation.

The Brooklyn Nets have great odds and easily make it to the ECF. Starpower of KD and Blake Griffin is as good as you can get, but don’t sleep on Jeff Green and Landry Shamet’s college games either. James Harden thrived more in the NBA and Chris Chiozza doesn’t give enough off the bench.

The Boston Celtics have a fantastic lineup of college stars. Kemba Walker and Carsen Edwards highlight a terrific scoring backcourt, with Marcus Smart there to add even more and a ton of defense. Jayson Tatum can score from the forward spot and no one’s getting past Tacko Fall at the rim. Payton Pritchard is perhaps the top sixth man out of these eight teams, giving Boston the ultimate edge.