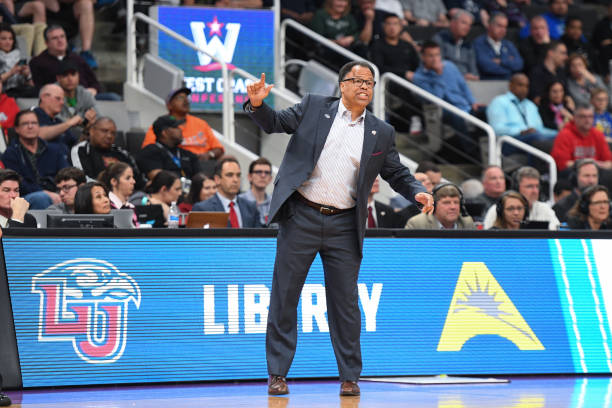 Liberty basketball is lucky to have Ritchie McKay. The polished coach excels past just basketball.

It’s perhaps why McKay is now being measured as one of the top coaches in college basketball, having guided the Liberty Flames program to the last two NCAA Tournaments. In 2020, had the season not been canceled, the Flames finished with a 30-4 overall record and had already clinched an automatic berth from defeating Lipscomb in the Atlantic Sun Championship.

It’s seasons like that that elevate coaches to new heights. Before his current stop at Liberty, he also coached there from 2007 to 2009, McKay was an assistant under Tony Bennett at Virginia. It was there that he really developed a deeper understanding of the game.

“All that you hear about Tony Bennett, his basketball excellence as a coach, all that’s true,” says McKay, “And so is he’s even a better person. That usually comes right after what a great coach he is.”

McKay calls Bennett his “mentor” and has applied Tony’s philosophies of the game at Liberty. “I just had this inkling that it could be done at a high level at the mid-major level,” McKay says.

Bennett might have been just what McKay needed. McKay had already been a head coach for thirteen years before joining Bennett’s staff, but it came with turmoil – as many challenges as perhaps any coach has faced.

From basketball standards, he had plenty of ups and downs. Three schools in six years finally led to a more constant job with New Mexico.

It was there that McKay was tested beyond coaching.

In 2004-05, one New Mexico Lobo committed suicide and another attempted to. It’s hard to even think of how he got through the year and stayed two more, all while balancing coaching duties and the unthinkable of losing a player that tragically, and almost having to go through it all over again.

That year, McKay was also able to lead the Lobos to the NCAA Tournament, his first ever as a head coach. They never got there the next to seasons, which led to his departure and ensuing job with Liberty. That lasted two seasons, the latter ending in a 23-12 overall record.

That season was extra special because McKay coached perhaps one of the best players in his nearly two decades as the head guy. But it ended sour, because Seth Curry, the Flames star, transferred to Duke in the offseason. McKay decided to resign.

But a bitter ending with Liberty basketball the first go-around was perhaps what really shaped why we know Ritchie McKay today.

Because fast forward 11 years later, and McKay’s coaching was put to the test again. As if the COVID-19 pandemic wasn’t tough enough to coach through, the disgusting murder of George Floyd prompted as much civil unrest as this country has seen in some time.

“I want our voices to be heard so that we can make a decision, or have a perspective that is congruent with what we believe as a family,” says McKay.

As an African-American coach on a team split right down the middle – not by views by but race – eight Black players and eight white players – McKay had to bring them together when it seemed like the country around was doomed. He wanted their voices to be one together. To talk things out as a team, the way mature young adults do, a testament to the way he runs his program.

He held “no cap sessions”, team meetings where McKay and the players would, “talk about all the aspects, we’d run the gamut, from political agenda to unintended racial comments, or unsuspecting privilege, or even sharing some stories of people that were iconic in black history.”

This brought Liberty basketball together during a very crucial time, non-basketball-related yet overtly more important than cutting down any nets or raising some trophy.

McKay owes the way he handled this situation to his faith, something else he attributes partially to Tony Bennett and Virginia.

“I’m a Christian before anything else,” says McKay.

This didn’t start at Virginia and McKay wasn’t brought to the Lord by Bennett. It was an aspect in Charlottesville that McKay says he’s lucky to have at Liberty.

Sports Spectrum, a Christian sports publication, explored Bennett’s faith during the 2018 NCAA Tournament. Their feature on Bennett included a quote pulled from something Bennett said during an interview with the Billy Graham Evangelistic Association.

McKay felt blessed to be a part of a program where he shared such beliefs. “When I left (Virginia), I thought I’d probably never have a chance to go back, and really enjoyed working at a faith-based school.”

Well, McKay did get the chance to coach again at a faith-based school in Liberty. McKay said:

“When the opportunity came up again, at Liberty, I thought, wow, this is this is really evidence of God’s sovereignty and maybe even a sense of humor, because I left on April 1, 2009. I came back on April 1, 2015, and came back a lot more mature, a lot healthier, emotionally, and spiritually as a result. I think being at Liberty is something that I really had an appreciation for, like never before. So there’s a contentedness that it feels like home.”

Now, it’s clear how content McKay is at Liberty, and vice-versa.

The Flames made it publicly official on April 7 of this year that McKay had received a contract extension through 2028.

Coach McKay has signed a contract extension through 2028 🖊 pic.twitter.com/RmYwKxKE6V

If McKay stays the full tenure, he will surely become the longest-tenured coach of Liberty basketball since they made the move to Division One in 1988. Along with it, he could really cement himself as one of the greatest mid-major coaches of our time and perhaps college basketball history.

The structure McKay and the Flames have built is quickly climbing to be one of the most consistent on the mid-major level and one of the top programs in the country over the past few seasons. If it keeps up, there’s no reason why Liberty basketball can’t become the next Belmont or even VCU – a quality mid-major program that consistently schedules tough in the non-conference to prepare itself for the NCAA Tournament.

Next season, Liberty star Darius McGhee could be one of the top players in the nation if he decides to return for his senior season. Last year, the 5-foot-9 small assassin averaged 15.5 points, 4.4 rebounds, and 2.1 assists per game. Next year, he’ll likely have the spotlight centered on him for each game plan he faces.

But coaching stars is nothing new to Ritchie McKay. His first year in Albuquerque McKay had Ruben Douglas on his roster. Douglas led the NCAA in scoring that season.

The next two years, the Lobos were led by Danny Granger. Granger went on to have an eleven-year NBA career which includes one NBA All-Star appearance and multiple seasons averaging over 20 points per game.

Seth Curry stayed one year with Liberty in the 2008-09 season, scoring 20.2 points per game with the Flames. He’s now an NBA veteran in his own right.

McKay has a chance to add another star to that list if McGhee comes back for another hoorah with Liberty. If he doesn’t, it’ll be up to McKay to produce another winning squad, a feat he’s accomplished every year since 2016.

“You’ve got to try and be a Cinderella for a little bit,” McKay says, “I think it helps every aspect of you not only your program but your institution.”

He mentioned the Gonzagas, Saint Mary’s, and Loyola Chicago’s of the collegiate landscape. Those are the programs that have made their marks time and time again to the point where you expect them to compete with the big boys, even in mid-major conferences.

Next year could be the year that Liberty basketball begins to eclipse that status, at least minimally. But ultimately, winning in the NCAA Tournament is the only way to jump ahead to where McKay wants them to be.

Although CBB Review hasn’t released Way-Too-Early rankings yet, the Flames are certainly in discussion to be on the cusp of that level, and certainly the preseason favorite to win the Atlantic-Sun for a fourth straight year and earn an automatic bid into the 2022 NCAA Tournament.

“I hope we can keep improving so we can stick, maybe stay relevant, and maybe even end up on the national scene one day,” says McKay.

For now, it’ll be up to McKay to prepare his team for the upcoming season, and he wouldn’t trade in that goal of winning in the NCAA Tournament for anything.

“That’s what makes college basketball so fun and so enjoyable to be a part of,” McKay closed.

But trust, he isn’t closing the door just yet. If you had to make a bet, it’s merely just opening.

2 thoughts on “Liberty Basketball: Few Coaches are like Ritchie McKay”