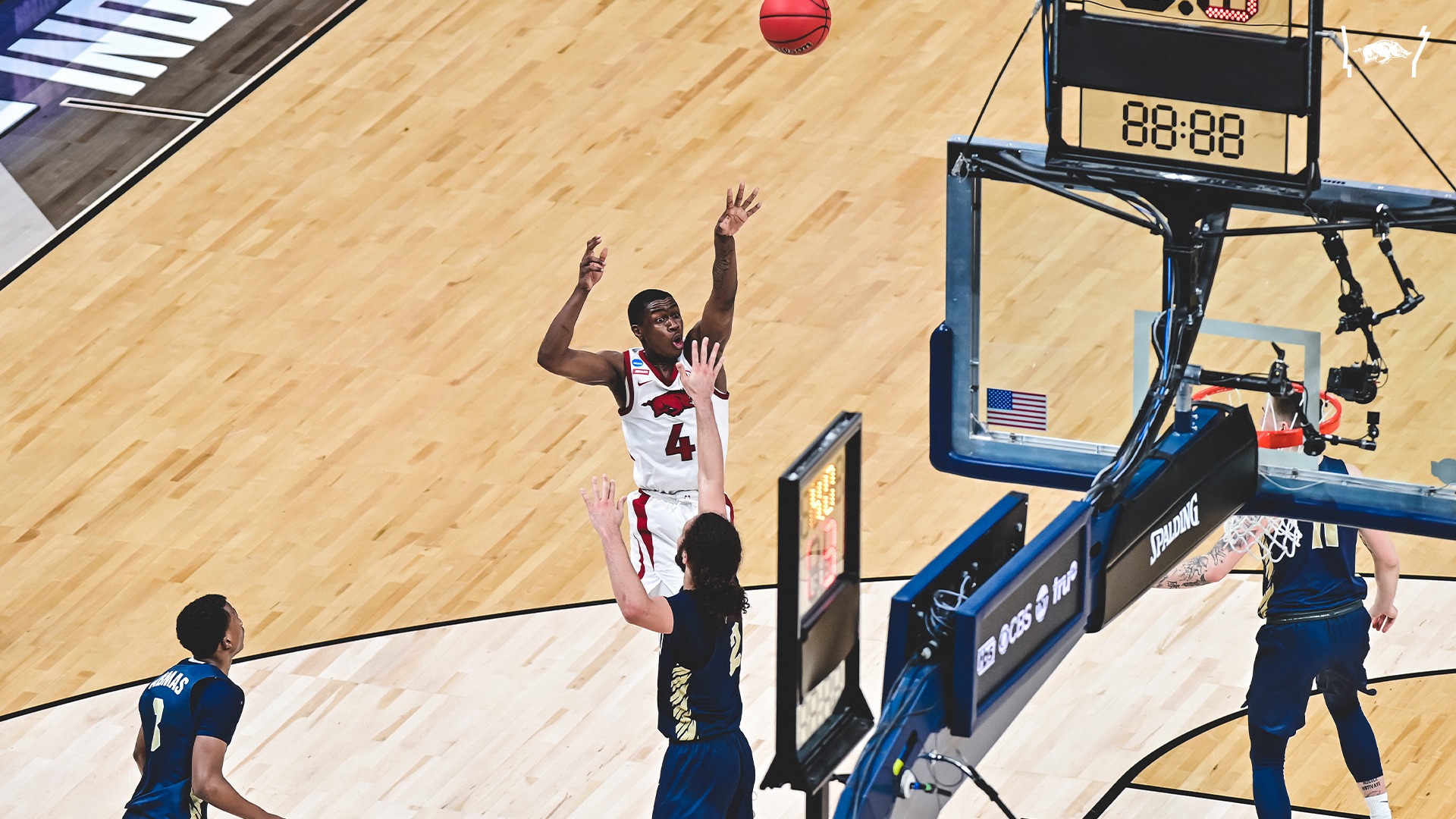 March Madness saw its Cinderella bow out as Arkansas basketball pulled it out late against Oral Roberts.

March Madness has lived up to its name this year, with the Sweet Sixteen looking much different than anticipated. That included the Oral Roberts Golden Eagles becoming just the second 15 seed to advance to the round of 16. However, Arkansas basketball overcame their third-straight double-digit deficit in the tournament to make the clock strike midnight, edging out ORU 72-70 to get to the Elite Eight.

Davonte Davis hit the game-winning jumper with 3.1 seconds remaining. Jalen Tate led the Razorbacks with 22 points, while Max Abmas shined one more time for Oral Roberts with 25 points. He got a great look from three as time was expiring to try and win the game for the Golden Eagles, but it bounced long off the rim as the clock hit zero.

1) Arkansas basketball crashed the glass in the second half

These two teams met well before March Madness, with Arkansas getting an 11-point win five days before Christmas. The Razorbacks trailed Oral Roberts by ten at halftime in that game, and they trailed by seven in this game. However, just like back in December, Arkansas eventually used their size to gain an edge. The Razorbacks won the rebounding advantage overall 46-35, but the bigger advantage was on the offensive glass, as they won that 18-6.

Arkansas basketball started to get second and third-chance opportunities in the second half as they slowly made their comeback. They also forced their way inside the paint, continually getting to the rim, even if not everything was falling as easily as they would’ve liked. To Oral Roberts’ credit, they played a pretty great game defensively. However, you can only do so much against size before it eventually takes over. It did just enough for the Razorbacks tonight.

2) Oral Roberts was inches from history

Perhaps the most heartbreaking part of this game for Oral Roberts isn’t that they missed a shot at the buzzer that would’ve won them the game. Instead, it will be that the Golden Eagles controlled this game for almost 37 minutes. It wasn’t until the game’s final few minutes that the teams traded buckets before Arkansas hit their game-winning mid-ranger. ORU defended well and contested just about everything Arkansas put up. Meanwhile, Abmas got more help from his supporting cast, with Carlos Jurgens scoring 13 points and Francis Lacis scoring 11. You couldn’t have asked for a better team performance.

Meanwhile, head coach Paul Mills had the perfect inbounds play for the Golden Eagles to have a shot at a miracle. He ran a few guys through Arkansas basketball defenders around half-court before Abmas cycled behind them, receiving the pass going towards the basket at midcourt. He was able to drive down the sideline and create space for a somewhat contested, but decent look from beyond the arc at the right extended elbow. It looked good from the TV angle, but was just off the mark, bouncing off the front of the rim and towards the left side of the court. Oral Roberts fell short, but hats off to them for a fantastic run.

3) Arkansas basketball plays from behind again

It’s already been touched on, but Arkansas has been the cardiac kids during March Madness. The Razorbacks faced at least a ten-point deficit in each of their first three games. They were down 14 to Colgate, 10 to Texas Tech, and 12 to Oral Roberts at one point tonight. It’s not an ideal way to keep advancing, but so far the basketball gods have been on the Razorbacks’ side. The question is whether or not they can continue that trend and win a national title in the process.

Baylor will be Arkansas’ next opponent, and it would be wise not to dig a hole against the Bears. Colgate and Oral Roberts were solid mid-majors, but eventually size won out. It may be fair to say that Arkansas will have a size advantage on Baylor, but the Bears reminded everyone just how good of a backcourt they have in their win over Villanova earlier today. This will by far be Arkansas’ toughest test of the season. They better come prepared.